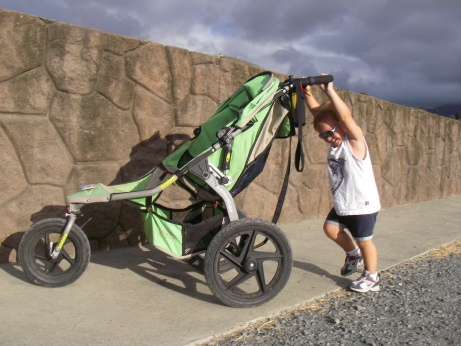 Sammy and I went for a little jog yesterday to test out some new running shoes. I really couldn’t resist getting these for him since he has been jogging the last couple weeks. I didn’t like the idea of rocks in his Crocs – that would be uncomfortable while jogging! I thought it was time to reward my little buddy for being such a good jogging partner. Yes, I’m aware that his interest may fade, and that I shouldn’t project what makes me happy onto him. He may not grow up liking to hike, either. The best I can do is include him, make it as fun as possible, and enjoy the time together while it lasts. He didn’t take to his running shoes the way he did to his hikers. It’s interesting to watch his personality develop – he’s at the same time loving and expressive as much as he is deliberately independent. So I know it doesn’t make sense to imbue anything he says or does with too much significance right now. He’s very amoeba-like . . . and I guess good parenting involves allowing him that room wherever possible. . .