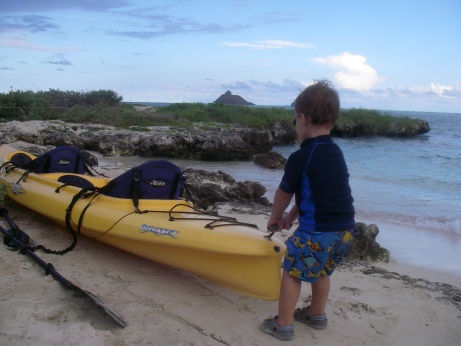 We got the kayaking bug this weekend, so on Sat late afternoon we saddled up and went to Kailua Beach park. Our destination, if the waves looked ok, was Flat Island (Popoia). We’ve both gone out there in kayaks before, and I swam out there once, but Sam hadn’t been yet. It’s pretty cool to go to a tiny island that you see so often while swimming or hiking. Sam knows the island by name and often points it out, so we thought he’d enjoy the quick trip. We got into the kayak ok – out past the breaks. The paddle out and back was uneventful, and it was fun to walk around out there. The island is very rough, lots of sharp coral worn down over time in a narrow path around the island. The water etched out little tide pools and there are a couple hidden swimming holes. It’s a bird sanctuary, so we got to see (and hear) some new birds. Sam enjoyed swimming, of course! He never misses an opportunity to swim. By the time we’d headed back the swells were picking up a bit. We knew it’d be a tad tricky getting in but we’d both done it many times before and figured we’d be fine. The idea is to keep your kayak perpendicular to the waves and then get out quick before a big one comes in (waves come in sets, smaller ones followed by a bigger one). We needled the kayak between a motorboat and the boatramp and had it pointed right in. We landed it but as soon as the bow hit the sand the next wave came in and caught us just barely broadside but enough to dump us out. I let Sam fly free onto the sand while I tried to block the boat against the waves. Dave jumped out and grabbed him. Sam was fine, physically, but very surprised by his quick ejection from the boat. He is not a quiet child when upset, so we both felt pretty conspicuous, being haole (white) and all, and landing where the locals hang out to fish. I could just imagine what they might be thinking. Oh well – it was an adventure. Sam wanted to go swimming again right away, so we dusted ourselves off and jumped in the water while Dave loaded the kayak back up. (No easy task – it’s a big tandem!) When we got home, we told our neighbors about our adventure. They were passing by on their beach cruisers and wondered where we’d been. When we got to the part about the rough landing, their eyes lit up and they said “oh! huli huli, yah?!” and made a rotisserie motion with their hands. They explained that the local dish “huli huli chicken” – which is cooked on a rotisserie – is so named because huli huli means to roll. Ahhhh…that makes so much sense now. I don’t think I’ll soon forget huli huli.

So today we got the bug again but chose water that was sure to be calmer for our entry and exit. I think waves are fine for kayaking once the family is all in, but getting in and out is the real trick and not so much fun while manhandling a toddler. We rolled the kayak down to the local park where the canal dumps in and put the kayak in there. It was really fun to paddle down to where the canal meets the ocean – about 25 minutes one way. Near the end of the canal we saw a bunch of turtles! It was so cool! Another family was enjoying the late afternoon sun out in their boats – a motorboat with moms and dads all sipping chardonnay while pulling a kayak with three kids in it. We pretended to race them and Sam really leaned into the paddle for that 🙂 On our way back we saw more turtles, so captured a couple on film. Unfortunately, it will be a bit grainy for you and the detail is less than idea. Hopefully you’ll enjoy the trip with us in person some day and can see them – it’s always magical even though it’s relatively commonplace to see them here.

Funny sidenote…yesterday we realized that Sammy’s Julbo sunglasses (which we love and had meant to get a backup pair of) went AWOL in the huli huli. So today we bought cheapo replacements while we await a shipment from Campmor. Wouldn’t you know he somehow managed to lose this pair as well despite the calm trip? We can’t find them anywhere although you will see them on his head for much of the trip! Hmmm…

At the end of the video, Sam and I are horsing around while Dave toils to load the kayak onto the rollers. Thanks for a great adventure! We came home to a dinner of kalua pig which I’d been cooking for 18 hrs and managed to grab our neighbor to share the meal with us. Mahealani is Hawaiian – it is so neat to hear her stories about growing up and learn about neat hidden beaches.