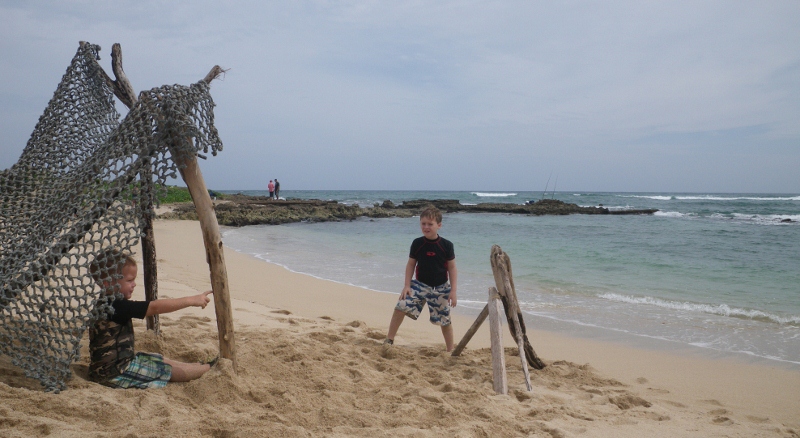 We had a great time swimming then building a fort out of driftwood and a net we found. We also built a tripod so we could take a picture of ourselves in it!

Ben thought it was a big truck, actually. But Sam really enjoyed building a real fort. Lots and lots of driftwood on the beaches this year. I think more than I recall in other years? Who knows. But it is lots of fun to see what kids – young and old alike! – build out of them all along the Kailua Bay beaches. This one is on the Marine Corps Base where we went for haircuts first (and WAHWIPOPS! says Ben). We also scored new amphibious hikers for Ben (who is a size 11 now) and new slippers for Sam (who is size 2 or 9  – not sure how the sizing works, it’s very confusing but suffice to say Sam’s feet are almost as big as mine). I got new running shoes on sale (size 9 1/2 if anyone cares – my feet are a size and a half bigger after carrying two huge boys around!). Maybe for posterity it’s worth noting that at age 6, Sam is 51 inches tall and 63 pounds. Ben (almost 3) is 40 inches and 37 pounds. The boys have been trading colds for three weeks now, but I think they are both finally on the mend. I have been spared, mercifully, for the most part. Mom got it good when Ben sneezed right into her eyes. Poor mom. But she is on antibiotics now and seems to be on the mend. Quote of the day, Sam, carrying a rock to show me which he’d dived down into the water to retrieve: “Mom, see this red? This has (pause to think a second) HEMATITE in it!” And the other day while chatting with my friend Ang about how everyone in the family was trying to shed a few pounds which had creeped on over the holidays, I noted that we’d all GAINED weight after starting a diet. Nice. Sam overheard me say “What are we drinking, heavy water or something?” and said “Mom, heavy water is D-two-oh.”  Right he was. D2O. Funny that I have to Google stuff he says pretty regularly now. Rest assured, though, he is being fully schooled in pop culture by…drum roll…the school. They watch 1/2 hour of TV a day. Shows we’d never seen before because we don’t watch PBS. Caillou who? Anyone have good suggestions for first chapter books for a guy who is reading second grade level? He hasn’t seen Harry Potter yet, so I don’t know if that’s a good chapter book to start? Aloha all and happy President’s Day. Did you memorize the Gettysburg address? I still remember the feeling of accomplishment getting through that – sixth grade I believe.

OH! Finally activated the ability for you to subscribe to posts via email at top right. Should make keeping up easier on you – no need to remember to check back. Thanks so much for staying in touch with us! Looking forward to being driving distance from EVERYONE! Watch out! No one is safe!