Did you know you still have a daughter? I know it has been ages since I have called or written anything more than 3 words! Are you still reading this? I am so so so sorry to have been OFF THE GRID lately! How long has it been? Sooooo sorry. Geez. It’s Mother’s Day! Time to share what is going on around here, but it will be brief because guess what…I have practice plans to print for roller hockey and eat dinner because I’m STARVING! First, though, I’d like to say what an inspiration you are for being energetic and loving to those around you every day! I am so lucky to have you as a role model for investment in the kids. I love you!

We have chicks in a rabbit hutch donated by a friend…because Dave won’t let me get a goat or two. I have plans, though…on that front. If you board goats for a neighbor, they’re not REEEAAALLY your goats, right? Richard…fencing. Think fencing. Yes. Dave doesn’t read this. I don’t think.

Dave is so very thankful I didn’t make good on my goat-adopting plans that he didn’t even PEEP about the incubator set up on the credenza by our dining table with 7 eggs in it, incubating for Ben’s 8th birthday, just like we did 4 years ago. I think he’s happy I’m in a chick-hoarding mania instead of just two goats. He may find that two goats is preferable. He seemed a little mystified at the energies exerted to herd 8 baby chicks in the tall grass while I cleaned out their brooder, but Ben is very good at catching baby chicks (Sam prefers herding them with hockey sticks) and got them right back into the paper shopping bag to carry back to the brooder when I had it cleaned, which was, of course, just minutes before leaving for the rink to skate. Picture Ben with a paper shopping bag, twitching and cheeping in his hand as he carried it into the garage. Picture Dave standing in his socks, watching and wondering. I often drive around, thinking about things, and something Dave said recently – “Oh, there’s no managing her.” I wonder if this is what makes him think crazy things like that? It’s all under control…I’m sure that’s evident, right??? 😉

Baby chick catching strategy: after some study, I noticed that chicks don’t back up. Their first instinct is to run. So catch from the front and they’ll run into your hands. Then just lock down the little chick-cage you’ve created with your fingers. Once this is accomplished, be sure you have their wings pinned down and don’t let them get leverage with their little feet. Then you can safely carry them. Once, Ben thought a chick pooped on his hand and he dropped the poor little thing. I have concussion diagnosis training now thanks to hockey, but the little chick seemed fine. Nevertheless, I named her Helmut (as in, Kohl). She continues to make expected progress… 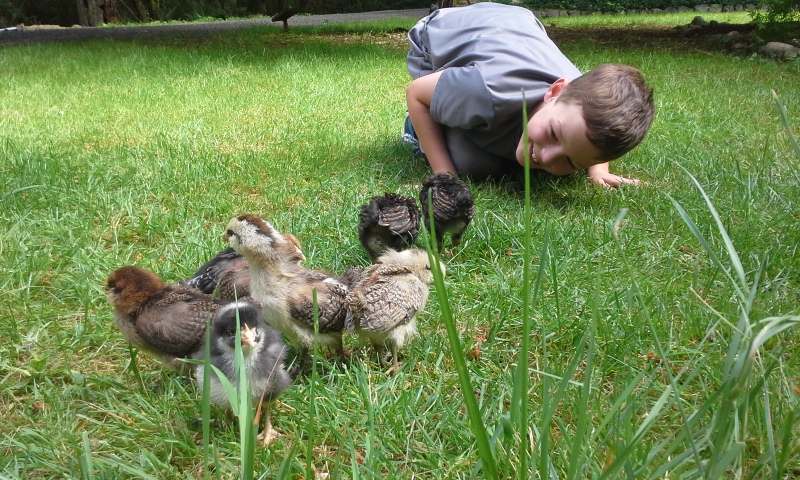 Ben is a good chicken herder. They get to go on “hikes” out in the grass with him! 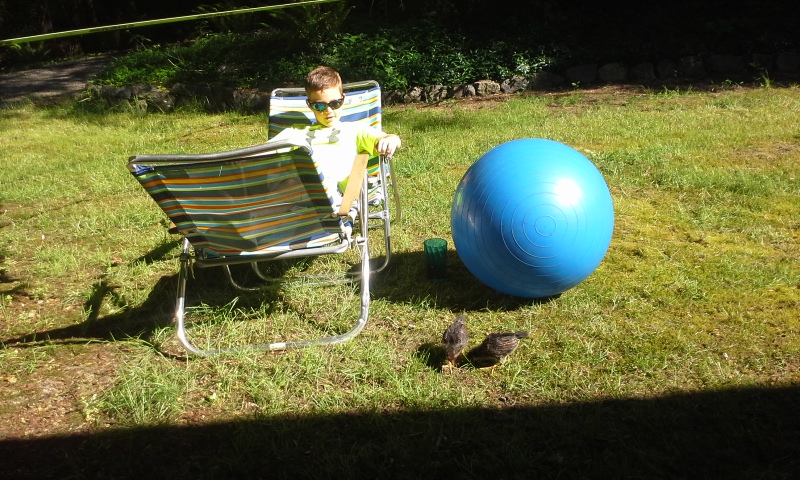 Sometimes chicken guarding is exhausting. One needs to take a little break 🙂

The roller hockey team is very small (7 kids, 4 of them entirely new to roller hockey) so my mission is to make it fun to learn the game AND learn to skate, incidentally. I have two very able assistants (teen coaches) so I try to keep the big picture, develop practice plans to provide structure, work with corralling (some are very young and escape the rink to go flop around) and morale. Team spirit – yes, I can do that! Enthusiasm and strong female role model for our girl players – yes, I can do that! I love skating and love the game of hockey, so I am very very happy to have this opportunity. Dave is reviewing my practice plans and telling me if he can hear me contribute anything from across the rink during games 😉 I’m still finding my voice as a coach. I’m an ardent and NOT SHY fan…but coach voice? That should be developed intentionally. 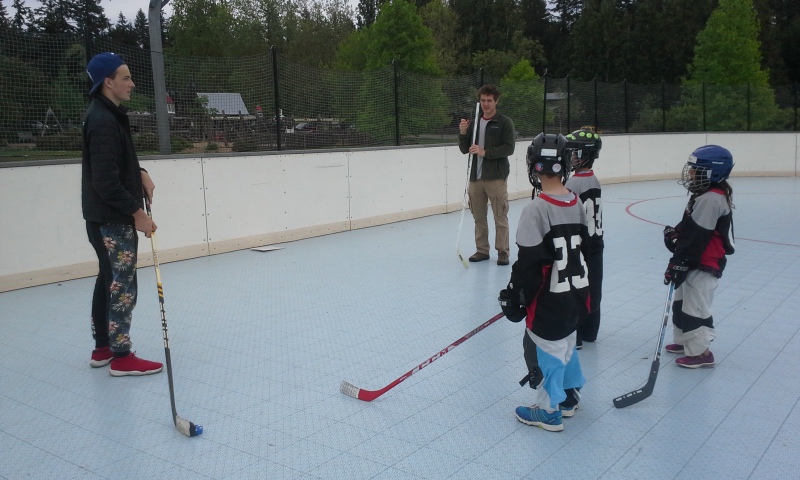 Second practice – in sneakers because a light rain had made the rink surface waaay too slippery. That’s ok – very easy to learning passing skills in sneakers! 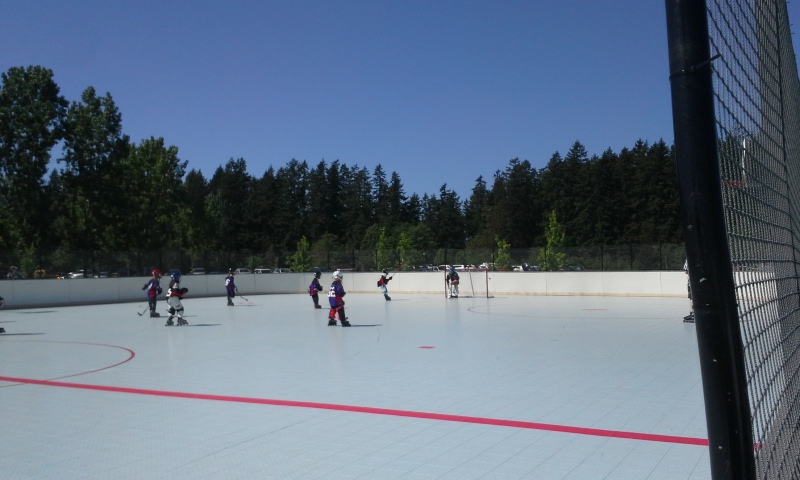 First scrimmages! hot hot day, then to a dressage clinic for me. Exhausting 😉 But fun!

I also lead a Coder Dojo club at the intermediate school to provide those kids interested in coding a social group and mentoring opportunities. I have had a lot of fun with this even if I feel very underqualified. I have terrific mentors from the community (two tech folks who donate their time) and we have at least a dozen committed kids who enthusiastically develop programs each week in free sites available on the web. We provide encouragement, challenge, and direction. And from time to time, CUPCAKES for developing a game based on a group-decided theme! (I.e., must be interactive and include cupcakes, a unicorn or a horse, and a happy ending!) 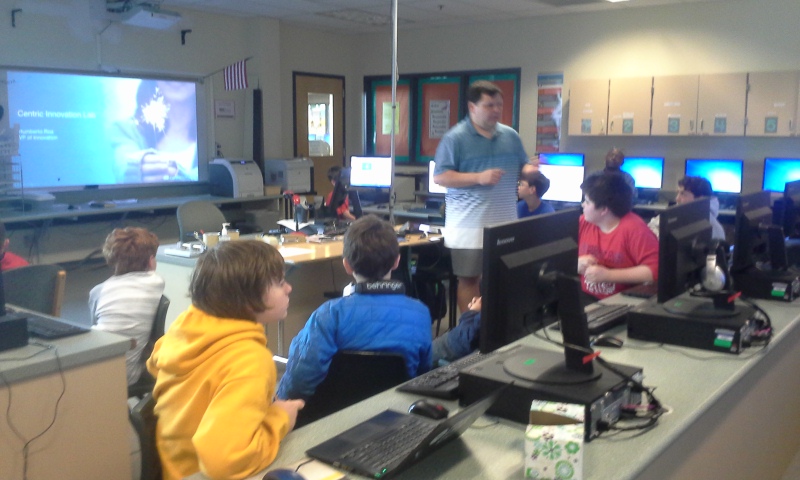 Coder Dojo guest speaker – Mr. Roas presents how his company improves product development efficiencies with customized apps. The kids learned what it takes to develop a concept through design, sourcing, manufacturing, and delivery. It was terrific! (I launched and lead the club on Thursdays at the intermediate school.) 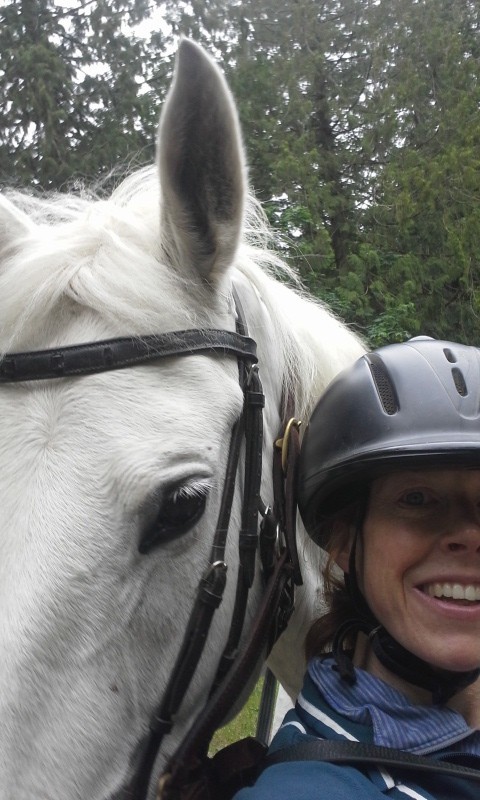 This morning I rode in a dressage clinic again (they are three days long) and then took Emmy on a trail ride. We rode around in the warm-up ring because I have a show next weekend (AGAIN right after a roller hockey game!) and while cantering my phone flew out. She tried to kick it on its way down into the sand. Pretty funny. So while I was off retrieving it, I decided it was time for a selfie. Emmy hates selfies. She was in the middle of rubbing her head on me and knocking me over. Thankfully I am very accustomed to being shoved – Sam likes to throw me around!

Before going to skate over at the roller rink with all three boys (Dave included) for our Mother’s Day outing, the boys and I tidied and cleaned the house (it looks great now!) and had a wrestling session. They don’t like to hug anymore so I lured them into our bedroom and got Ben onto the bed so I could really hug and wrestle him. Sam came in and saved him from me, and I foolishly tried to get Sam onto the bed so I could smoosh him and wrestle him, too. That went on for some time. We are a dead match now. If I can get my horse-riding legs around him, he’s sunk. But, I can’t quite do that anymore. He gets away quickly and is a terrible force to be reckoned with, especially if I’m in socks and he has sneakers on…on the wood floor…which was the case. I was handicapped. I will come back to this…

Off to play some hockey…then home for pizza. While waiting for pizza I decided to address the chicks’ naughty habit of putting their cedar shavings into their waterer, making for soggy shavings and a tough time getting water. It looked like such a nice, cushy place until they spread the shavings all over. (This was the boys’ idea – they should have shavings, not newspaper. Seemed reasonable. Seemed like Mother’s Day would be a nice day to make their nest even better.) Anyway – I got the hamster waterer from the grown-up chicken coop and cleaned it, then wired it up to the rabbit hutch. I thought it would at least be interesting for them, and perhaps make my life easier. Watch…how long does it take chicks to figure out how to use a waterer? I started filming about 10 min into the adventure.

Happy Mother’s Day, all you moms! Thank you for reading this tribute to the life force we all bring to the homefront. I love you, Molly, Tam Tam, Rebecca, Jenni…and of course my own mom, and my cousins, Leslie and Deborah!  (I just got a note from Leslie – my cousins are alive! And actually read this post!!!!! Turns out they are frenetic, too!) 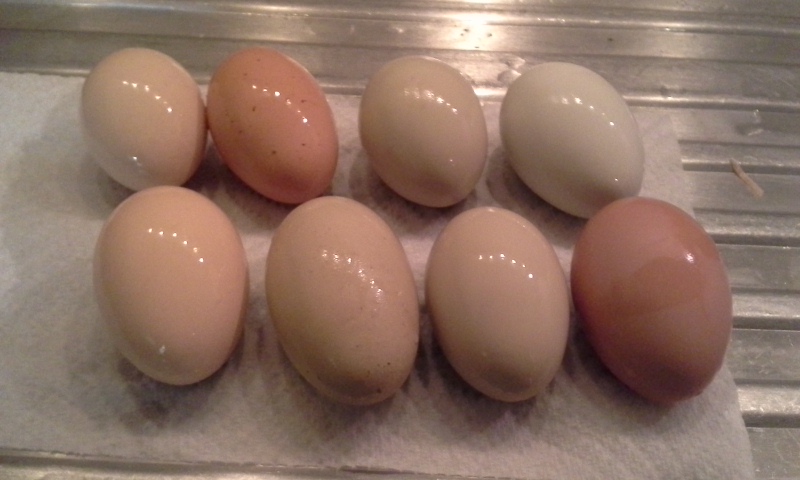 I know I know…JUST when you thought it couldn’t get ANY better…I went out to close the coop (the BIG birds, the college dorm) I found EIGHT eggs – ALL 8 layers LAID! This happened ONCE before. On the vernal equinox. Amazing, right? Here they are! And guess what else? One of the older babies was ROOSTING tonight for the first time on his little maple branch in the hutch, under his warm red heat lamp! When I went out to check, there he was, ROOSTING like a big boy! (Not all is bliss…the garage door wouldn’t go down all the way. Ben had knocked the emergency brake thing so that it wouldn’t close but it took three people 3 minutes to figure this out.) Lest you think it’s all cheep cheep cheep here…I did growl at that because I was the janitor at the time (doing recycling and kitchen clean-up) and simply wanted to close the darn door! 😉