Mommy, is dorkus a nice word?

It’s been a very busy weekend with Thanksgiving then a hockey tournament (replete with days’ long bake sale fundraiser). And just for fun, on Friday night Sam and I were horsing around (you know where this is going) with whipped cream and pumpkin pie. This is a family holiday tradition going back several generations. My mom’s dad apparently had a mischievous streak: “honey, I think the whipped cream has gone off a bit? Could you check?” My grandmother took a little sniff, then BAM! a swift bop and her nose was full of the fluff! This continued on with the children…each older child in turn would stifle a laugh as the next in line would be inducted into the whipped cream hall of fame. I didn’t really remember this when I went for it on Friday night…the moment just seemed to be there. Sam was swiping whipped cream with his fingers and stuffing it into his mouth, so I grabbed a handful and helped him stuff his mouth a bit – it got messy quick! He grabbed the can, tried to spray me, I escaped with a little in my hair. Then I asked Sam: “Hey, Sam! Can you still SMELL the pumpkin under all that whipped cream?” He bent over to smell…and yes, I plunged his nose right into the white fluff. (Buttercream frosting leaves better nostril marks.) He took off chasing me around the house with a handful in retribution and when I got cornered I turned around helplessly and saw him smiling in pursuit! That’s when I noticed…a THIRD OF HIS TOOTH WAS MISSING!!! He’d chipped a front tooth on the plate! OMG!!! OMG! This is reeeaaallly BAD! So, my hockey player had a badly chipped tooth, but not from hockey, or any LEGIT sport as the teenagers at the rink were quick to point out. It was from HIS MOTHER shoving his FACE into PIE! Freak accident, yes, funny now, yes, but I felt (and still do) horribly about it. We have the most incredible dentist, though, who was willing to come in yesterday to assess him and fix him up today. Here’s a shot of the progress. You can’t tell now. 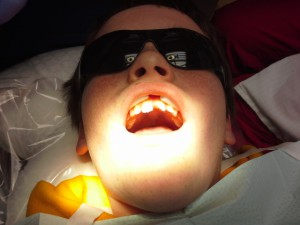 Today I got bucked off for the first time in two years of resuming riding. So – an epic day for me as well. I should have known better than to grit through a sense of Emmy not being in a cooperative mindset. Riders call it “behind the leg” – not accepting direction. It’s a decidedly unsettling feeling when a horse isn’t moving forward under you. The etiology of all bad things horse-related is riding a mount who is not in front of the leg. I should have jumped off and lunged to reassert my proper place in her horse hierarchy, but I’ve worked through such rides before. Today I was really relaxed – maybe because I have a lot on my mind (work, sick kids, school stuff, visiting family, etc.) and had survived hockey, so I wasn’t really ON mentally myself. You have to actually be a bit edgy to ride well – very much in tune to your environment and the beast. A bit wired. I wasn’t today. I was relaxed, which, oddly, enabled me to fall well. I saw it coming – a buck on the canter depart which threw me forward, then I couldn’t recover fast enough for the next one and saw myself sailing toward a wall. Hit my head (that’s what helmets are for) and landed on my back. Within a few minutes I was back on after my instructor, Janet, had a conversation with Emmy. In describing this to Dave tonight, he said that could be courageous or stupid. I replied that Roosevelt (my current historical interest) would have gotten right back on. Dave replied “Yes, because that was his mode of transportation and he still had 1,500 miles to cover.” 😉 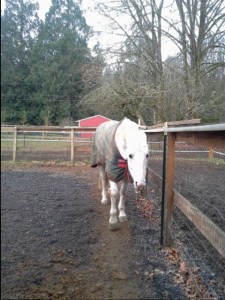 Back to the post title. I was packing up kids into the truck yesterday after the tournament was over and the younger sister of our goalie was asking her mom this question. She’d just heard Sam call me that 🙂 I’m sorry for the influence of my crazy children! Oh – wait – I should apologize for MY influence on THEM I guess! Hope you had a sane holiday!!!!