I just noticed it’s been 6 weeks since I last posted! Since then we’ve had a very exciting conclusion to hockey season with making it through our division’s 3-game playoffs and winning the final game! Here is a link to our highlights reel created by one of our parents who works for Adobe. Ellen has a great eye and stitches these reels together right on her iPhone using an Adobe app called PremierClip. 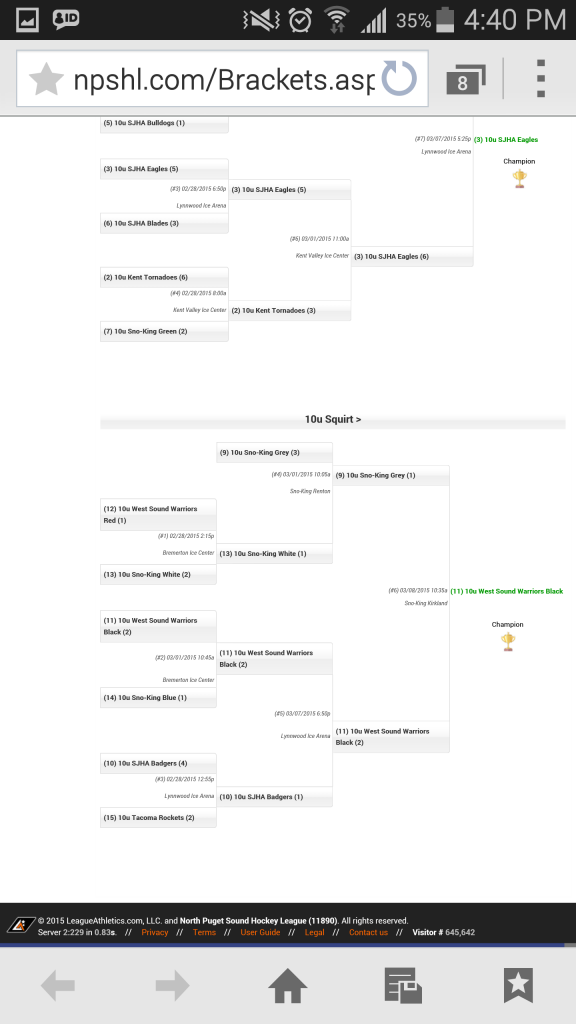 The semi-final was just about as miracle-on-ice as a parent could wish for – tied at the end so the kids went to a 5-round shootout (best of 5 would win). Sam was #3 in the shoot-out roster. The other team scored the first shot, then we went – no dice. Then they did, no dice. Then we went – Sam scored, tying us up again! The next two rounds no one scored, so it then went to sudden death and we proceeded through the rest of the roster – all 10 kids got a shot in! The home team scored in sudden death, and one of our guys scored his FIRST season goal to tie us up again (go Hap!)!!! A few more rounds – no scores, still tied. Finally our second shooter (Adam) went up again and scored the final goal to win the game! It was just unbelievable! 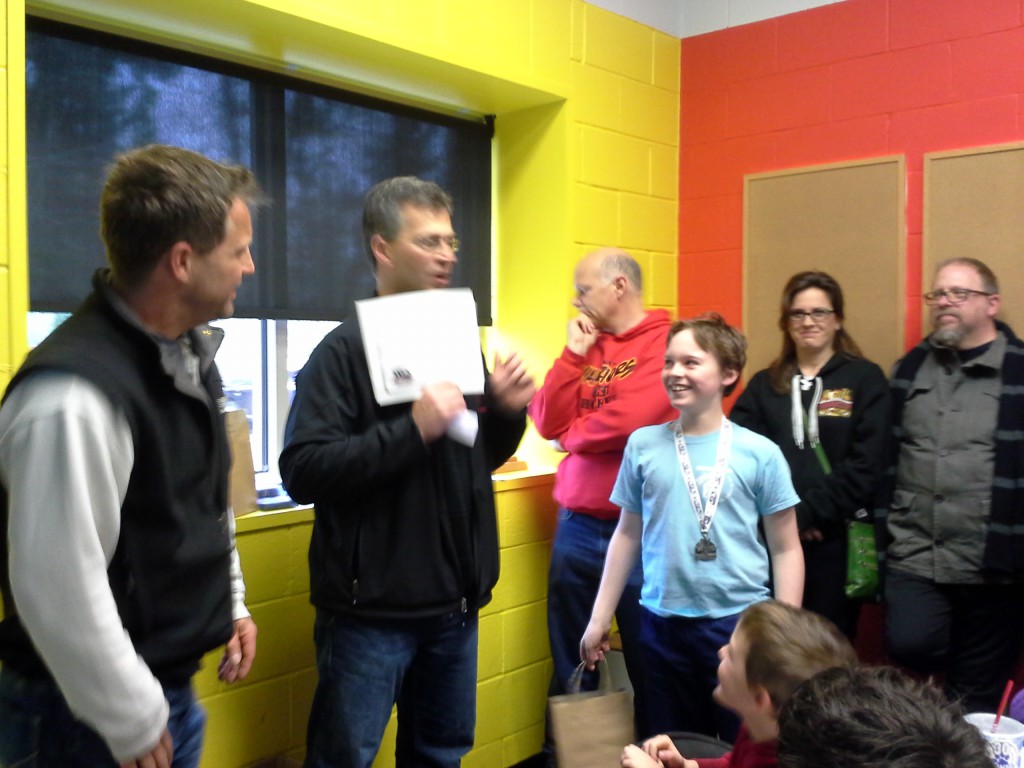 Sam beaming at the awards ceremony. I will have to get better shots of all the swag. I was pretty busy helping hand bags over and things. This is Coach Pike talking about Sam – “Mr. Persistence” who waits for the right shot or pass. He also got a medal, a shirt with his name and number, and you can’t see it but the best of all was a custom puck and stand with trading cards for each of his teammates made by the dad in the red sweatshirt in the back (Frank). You will NOT believe how cool they are, and how nice it is to thumb through all the buddies now that we don’t get to see them as much. The stories, personalities and locker-room shenanigans – not to mention the face-off shenanigans that I’m just learning about! – made for a wonderful season. Our team had the best morale and bond. We were very fortunate!

Ben’s basketball team wrapped up their season, too – UNDEFEATED! They had a couple really close games where they had to come from behind and won by 1 or 2 points. Nail biters! We have been so fortunate to have coaches for both boys who were just unparalleled in their dedication, professionalism, and commitment to helping each child grow no matter where they started in skills. Thank you Coach Pike, Coach Wilson (both hockey) and Coach Tomine (basketball). We are grateful! Enjoy your off time! 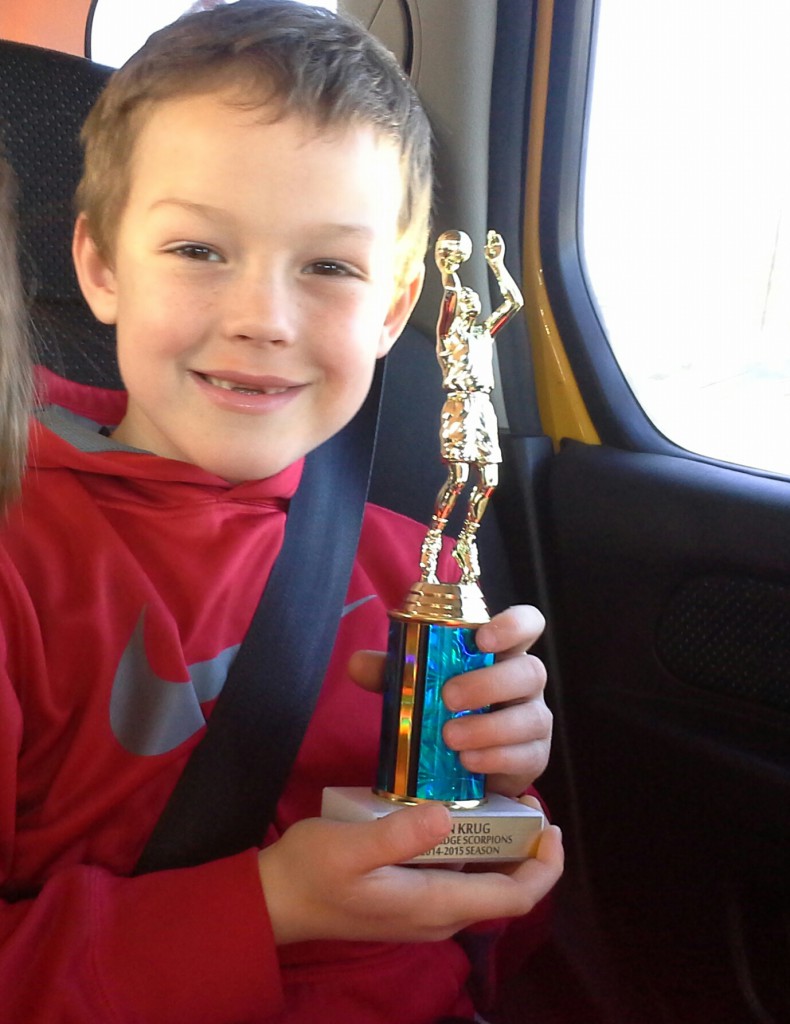 Ben showing his trophy while we are on our way to hockey playoffs! Ben’s team played their last game Sat morning, then we went for team lunch and awards, then hopped the ferry for Sam’s game. Can you believe it? Oh – notice he’s also proudly missing two front teeth!

So – life after hockey? We just ended Sunday. It’s taking a couple days to adjust. We’re all in a bit of withdrawal because we enjoyed the routine, the practices, the people and all the action. The kids are off school Wed-Fri this week for parent-teacher conferences so I served up breakfast outside this morning, just to mix it up a bit. The sun was magical coming through the woods. When I got back from riding, we hatched a plan to buy a card game which has taken the school by storm (Magic players, anyone?). We played at the same picnic table this evening. I got UNO for myself because I can’t stand learning tricky games. I have no patience for the learning process! Bad mommy. So UNO is for me! 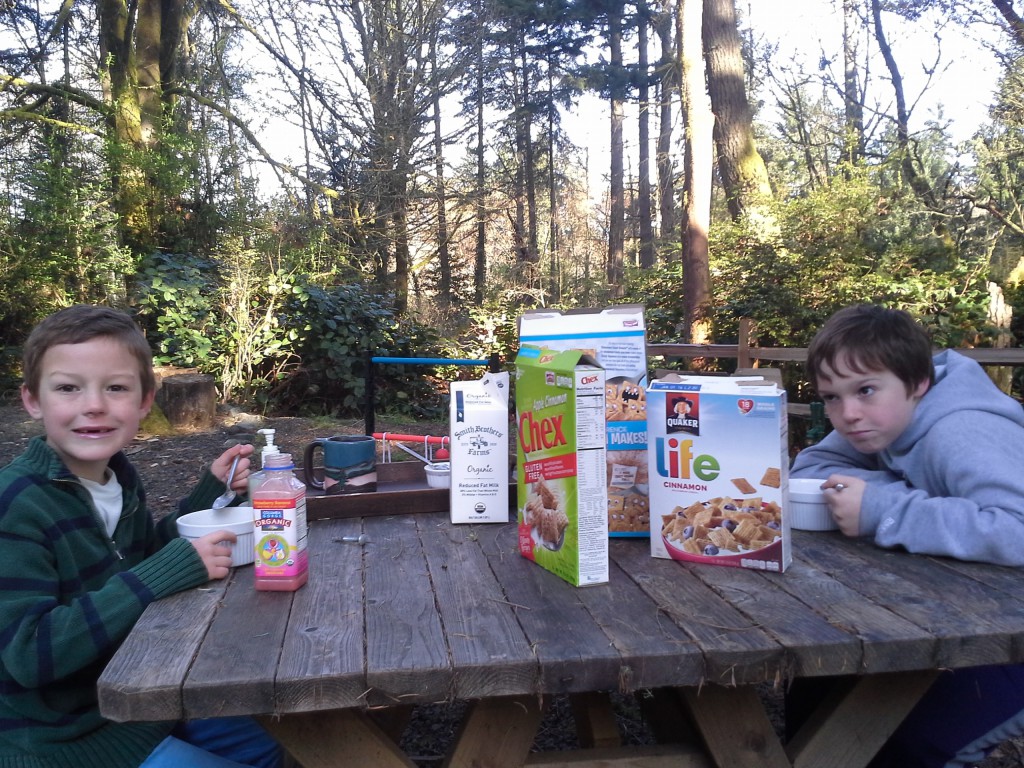 Picnic breakfast with the crazies! Can you tell Daddy bought cereals? They don’t exactly match mommy’s desired protein:sugar ratio but they are GOOD!