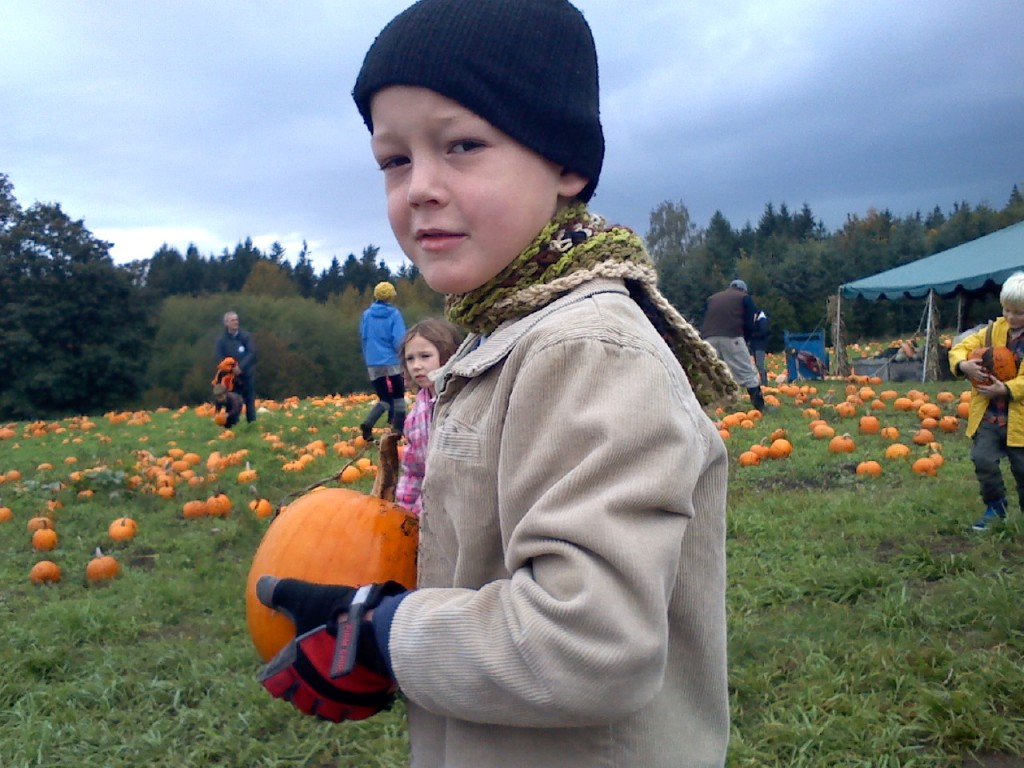 At the pumpkin patch. Poor guy was pretty sick but really really wanted to go. Later he told his teacher he didn’t know what a pumpkin was. (huh?) Read for the rest of the story.

Ben is a funny guy. Both boys are very funny in different ways. Sam specializes in physical humor, Ben in verbal wit. His parent teacher conference yesterday is one example. His teacher writes down things he says from time to time (she does for all students) to communicate to parents. When he was asked to help read in a read-along book, he recognized “The” right away and read it. The next word was “cow.” He said “That’s not one of my sight words” and refused to try reading it. His teacher doesn’t know yet that he knows all the letter sounds and could totally sound that out because she also noted that during “zoophonics” time – where the kids act out and say letters, their associated character name and gesture – Ben sits there with his jaw slack, just watching. He doesn’t participate. So she doesn’t really have a good read on what he does or doesn’t know from time to time, even though I shared with her that he’d worked his way through the second level of Fry’s sight words (so about 200 words he can read, and he can sound out pretty well – the word “instinct” the other night, for example). Anyway – Dave and I laughed pretty good at that. It really sounds like Ben!

So tonight I thought I’d just casually find out what the zoophonics characters are from Ben (as a way to see if he knows them and just doesn’t want to engage with the activity for whatever reason). He knows all of them, their names, the letter sounds and the sign/gesture! I asked why Queenie Quail has the little hook sign and he said that is because male quails have that. (But it is a queen quail which is female!) I would be so confused :0

Anyway then I asked something else – like when two letters make a sound together, what is that? I couldn’t remember the term. I said like “ch ch – is that Charlie Choker?” and made a gagging sound. He loved it. I said – so what is that called when two letters make a sound together? Ben said “That’s a biophobatic.” “What? How do you spell that?” I said. (Pause) “B I O F O B A (pause) T I K” he said. Five syllables spelled phonetically. This guy is funny. I asked later – so where did you learn about biophobatics? “Mrs. Pratt. She taught us.” (Mrs. Pratt is the school counselor – there’s no way she said anything like that!)

Do you see what I’m dealing with? We have a big rule in our house about honesty and not lying on big or little things, but he knows the difference here. I really believe he’s just  messing with me and he knows I know. I don’t know how his sweet teacher is going to deal with him this year except for keeping her sense of humor and not believe him if he professes to not know something. He enjoys it when I make things up. Like I asked what a quail was. I said I thought it was a huge balloon and he laughed hard, then corrected me. That is how I get the straight scoop sometimes.

Two other funnies from a few months ago that I don’t want to forget. We were prompted to ask the boys “Why do zebras have stripes?” So we did over dinner.

Ben first. “Because they are mag-NI-fi-cent!”

Sam. “So that you can tell them apart from other animals. Like donkeys.”