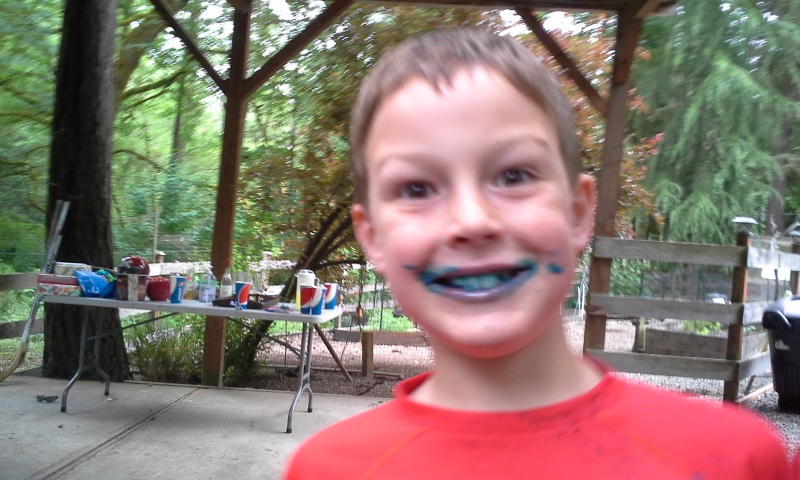 Ben is a party boy!

Today was a big day – First Communion for Ben and his 8th birthday! We decided to do both on the same day (WHAT!?) so that he could celebrate his actual birthday. Somewhat thankfully his roller hockey game got rained out this morning (game and church within an hour!). I was at the rink at 0800 to figure out if we were calling the games or not due to rain…then home…take care of chicks…dress and head to church.

Disjointed post alert…this is one of the reasons I fall behind in posting anything here because so much happens in 48 hours, not to mention a week or two. Can you handle the off-road style post bouncing all over the place such that the seatbelt locks in place, pinning you down? Here we go…

Chicks – have I posted yet all the chicks hatching out here? I don’t think so – I have chicks coming out of my ears! I timed eggs to hatch on Ben’s bday so the incubator has been “cooking” them for 21 days.  It is so exciting to candle eggs and see a little beak or foot moving. Two days ago the first chicks started pipping! We could hear them peeping from within the egg. Now we have two little cuties from our flock to add to the 8 that I bought in my chick mania a few weeks ago. In the garage hutch I have a “loft” for the newest ones closer to the heat lamp, and the other 8 are wandering around underneath. It is crowded, but I have a plan to re-home some…because…you know, there’s just no good intro for this: we’re moving to JAPAN at the end of August. We just found out a week ago that Dave was selected to transfer. We’re excited for the adventure and often heartbroken to leave our friends. This past week has been very busy beginning the overseas transfer process, starting with medical screening, collecting medical records and filling out forms.

Back to the chicks, though…I got into a chick mania because Dave said no to goats, and now I have too many birds!

Here is a movie of the chick hatching fun… Gordon (our rooster) joined our flock 4 years ago on Ben’s birthday, so it just seemed time for a new batch of fun…

Ok – so chicks started hatching out on Thursday (one arrived a day early) and another yesterday. Today we had 8 boys over for Ben’s party. I set up a chick hockey rink so they could all see the chicks and learn how to pick them up, and the chicks could get a look at boys. I am not sure who was more excited! There was lots of flapping and shrieking all around, such that I had to really be emphatic with the boys about not scaring the chicks so much. They were flying straight up into the air – about 4 ft up! It was nuts! Everyone had fun learning how to catch the little buggers. Ben and I realized chicks just don’t tend to back up, so if you kind of block them from the front you can gently catch them.

Here are some pictures from the day. I also tried to make a hockey puck cake. And because it was cold, and because I have been despondent about not being able to split wood or have a real fire in Japan, I had a FIRE, too. Gordon and all the big chickens came out for the party as well, and ran amuck all over. Ben and his buddies ran around the woods with hockey sticks, whacking weeds (which was good) and also managed to whack a mole (isn’t that  kids’ game?) or a mouse and knocked it senseless. Poor thing. Lots of excited boys here. Every time I turned around it was something new. Only one Nerf bullet to the eye, and that boy will be ok. No one got hurt on the slack line or the zipline. Parents had a good time around the fire, eating some nice appetizers that Dave brought home. It was a great mix of hockey parents and school friends. 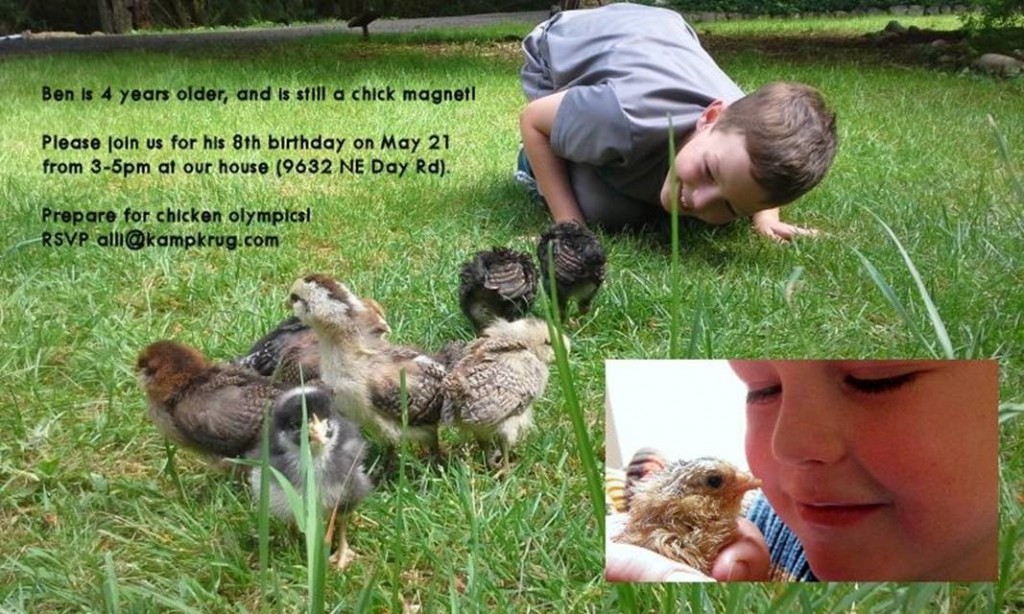 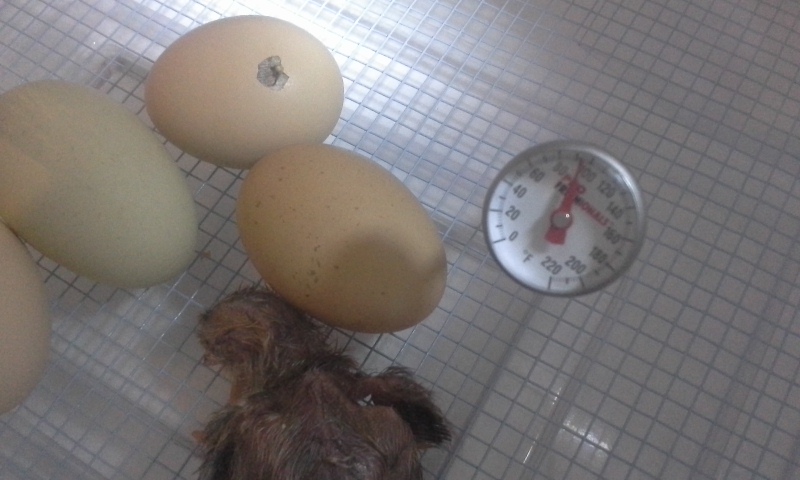 A chick in the incubator – the egg behind is pipping! 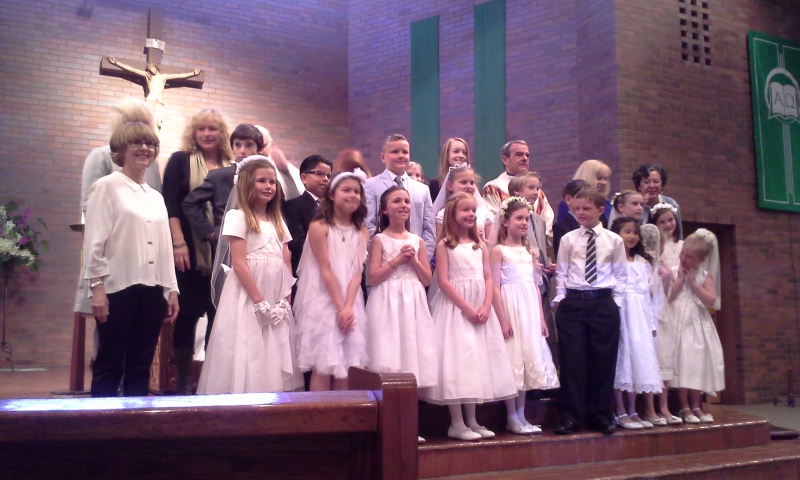 Ben and his First Communion class 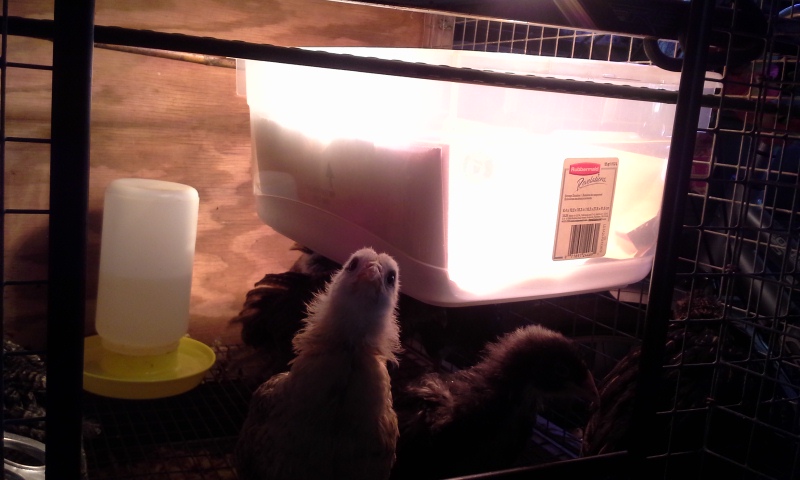 The hutch with the bigger chicks, and the “loft” with the two newest ones. I love this little bird in the front. She is SO precocious! Always greets me at the door. Very very curious. The first one to climb on top of the loft, too.  I cut a screen off a dead fan and put a ceiling in to keep the curious one from marauding the littlest sibling. 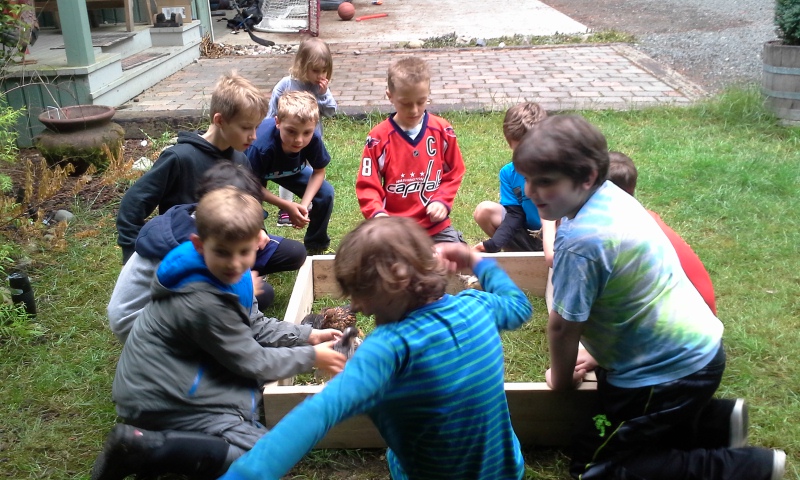 The chick hockey rink – one got away! 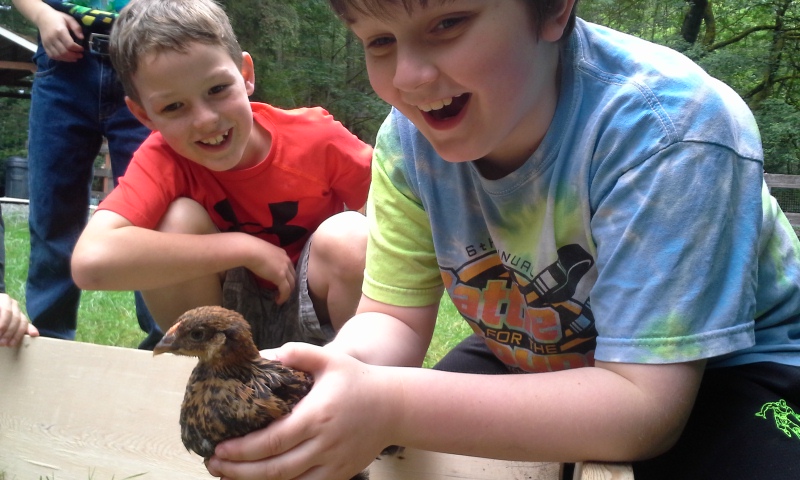 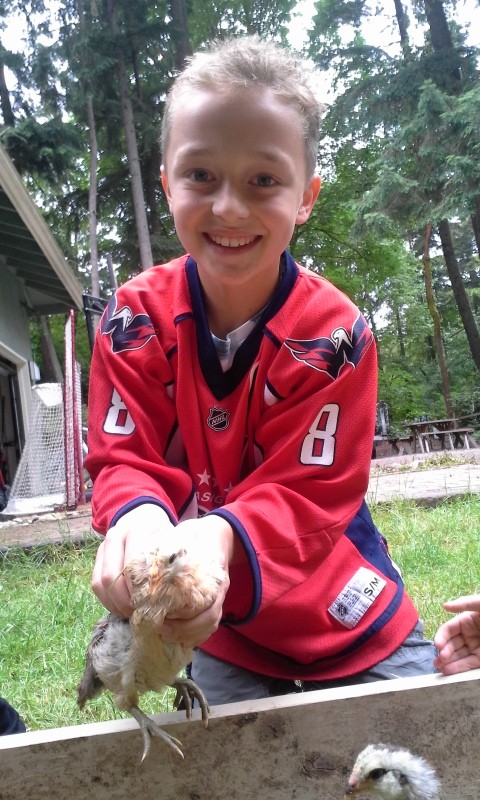 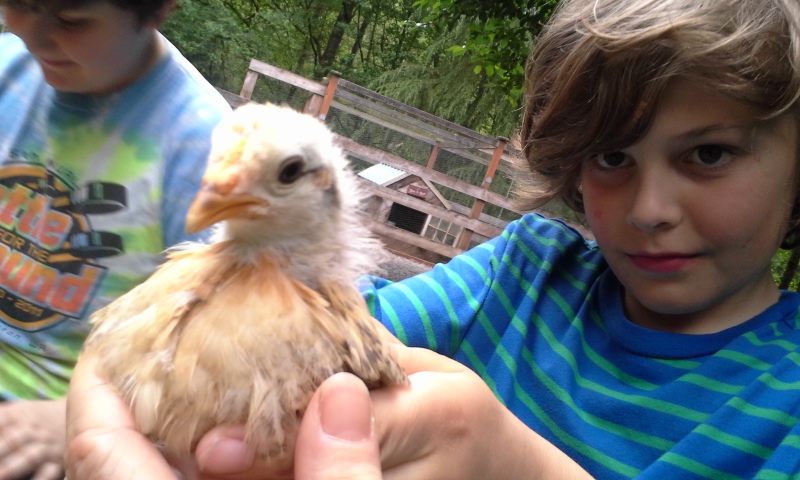 J and his namesake. 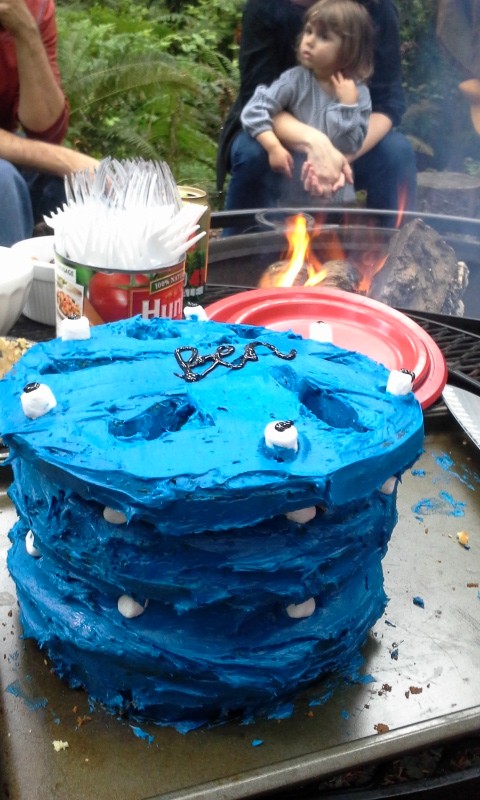 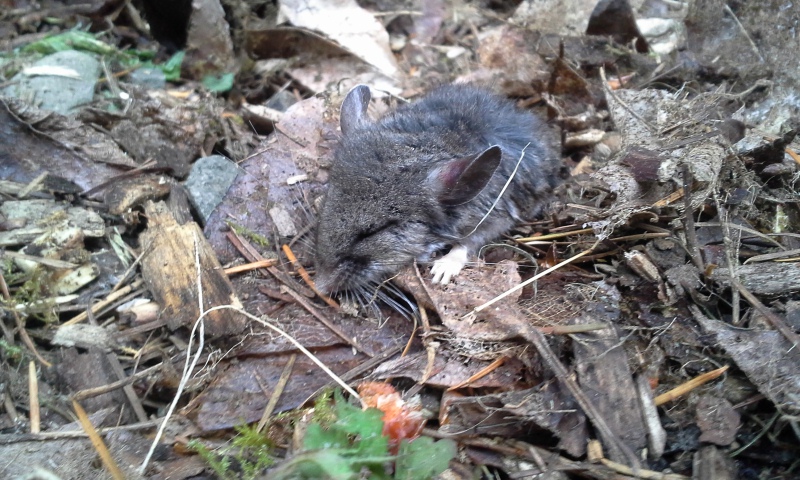 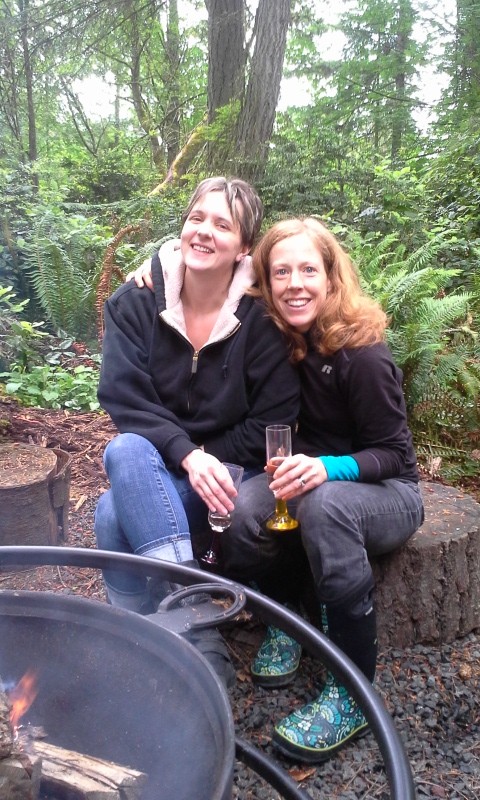 Jayne and me – she is another hockey mom. Four boys who play!

Happy 8th birthday, sweet boy, full of life and energy. I am so thankful to be your mom, and share this wild life with you. If it weren’t for you, Dear Ben, who would run around the market with me playing bumper cars with sour cream in hand? Who would giggle over silly games? Who would go for jogs and bike rides? Who would beat me up a mountain? And who would help guard baby chicks who need some recess and outside time? And split wood? And we haven’t even talked about ice hockey and roller hockey…you are an animal on skates with a great wrister. You love working on your shot at home, scaring the little chicks with all that loud whacking on the shooting tiles.

You also love reading very much and your favorite books right now are the Warriors series about a cat family. Your friend J loaned a book to you and you couldn’t put it down. You’re also very excited to build StarWars Millennium Falcon and a Creator Corner Deli.

How is school going? your grandparents are probably wondering…well, your teacher has been working with me all year to help you manage exuberant outbursts, but this week you managed to have a “zero” week as I called it. I knew you could go FOUR DAYS with ZERO reminders, and you DID! You’re an ace student, too, who pays attention to detail, does his homework expeditiously, and has an excellent brain with fabulous recall for details. Stunning recall, actually. And I regret mentioning this, but you’re a debater with a razor-sharp retort that is always accurate because it hip-checked nuance right out of the way 😉

Most importantly, you’re a loving and kind boy who is usually the first to notice I could use a hug. How you bundle all this loud boy energy into a body that is also sensitive enough to notice how another person is feeling, I don’t know. I cherish you.