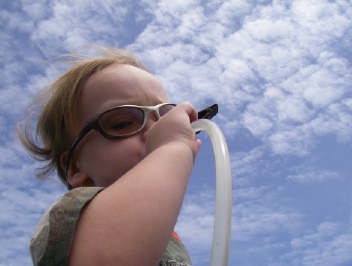 A picture from our hike today – we did the Pillbox trail in reverse, starting at the south end of the loop and coming back to the golf course trailhead. It was good to get that long walk on the road out of the way early. The hike up that steep trail at the end of Lanikai was difficult going up, but not as bad as coming down it. We were at the top in 30 minutes. From there to the third bunker it took 40 minutes, still carrying Sam. From there we walked (Sam on his own) to the first pillbox in 1 hr. Sam was slow today, checking stuff out all along the way, clearing the trail of rocks and standing on one leg “like a stilt.” It was cute, but not so cute in the strong winds up there. We had lunch then descended back to the truck where mom surprised us at the trailhead! We went to have some shave ice, and Sam stole much of mom’s cone.

Sam was very observant today on the hike. We talked about runways with a new bath toy (an aircraft carrier) last night. We saw a runway today from the hike (at Bellows) and I asked what it was – he said “a runway for planes landing”! He also loves a particular flower here – a plumeria? He picked one up yesterday on a walk to the playground and held onto it for 1/2 mi walk, saying repeatedly “it smells so sweet.” He held onto it on the hike for about the same distance while in the pack. We talked about birdies chirping in the trees – I asked where the birdies were and he said “in the trees,” and when I asked what they were doing he said “napping.”

Tonight he was very studious in his baff…he watched the water go down and stuffed a washcloth in the drain to see it stop up the water. Then he filled his big bucket up with water and put the washcloth in there and said “fishie in day-oh!” with a big smile. As the last of the water was draining out he said “it goes down a tunnel” (because he knows it’s a drain, I enjoyed this alternate take on what a drain looks like). Then he said – and I know you totally won’t believe me and think I may have heard something else – “water goes out ocean.” So I asked again – where does it go? And he said “to the ocean,” to which I asked “and how does it get there” and he replied “on a road.” During jammie time he continued to talk about this and said the water from the bath goes out “to the beach, to the water” and “comes down the rocks by the beach.” We talked about how rain fills up the lakes, then water comes into our house and goes back out to the ocean to come back down again in the rain. Lord knows if he has any idea what I’m saying…but you never know. I must have said once long ago that water goes out to the ocean from the bath. We also had fun with shapes on the hike – there are huge leaves with oval shapes in them and he noted that right away. I pointed out red hibiscus and he pointed out “yewow hibiscus” when we passed it. He is so full of wonder and absorbs so much information daily, it’s mind boggling. His mind must be really burgeoning with information. Mine would be totally and completely overloaded if I had to absorb that much stuff every day.

On a separate note, I made some sourdough demi-baguettes today which we ate for lunch (with peanut butter and honey – a favorite lunch request of some little buddy I know). They tasted good, rose well, had good hole structure and were soft and springy. They were lacking in oven spring (they should have had a better rise in the oven) but that could be due to lack of sufficient preheating – I only let the oven come to temperature rather than sit at temperature for 45 min or so (we needed to hit the trail). If the stone had been quite a bit hotter we may have gotten better oven spring. Next time.