Thanks to generous friends giving Sam an incredible night and day today, we were able to sneak away with Ben for a hike. I usually get to roust the family for a Mother’s Day hike but I think roller hockey games were scheduled for that day…so Dave suggested hitting the hills today. Good call – but it was HOT!

Here’s a run-down of Sam’s incredible 24 hours first, though: dinner with friends last night; sleepover with other friends; blueberry pancakes, hang-out time, hockey game, hat trick; pool time, and Hammy’s burgers! OMG!!!! All day I was feeling a bit badly for pawning him off, and thinking of him sweating it out with a 1pm game at the rink. I was texting another mom to make him drink water (I swear – I’m not a helicopter parent! ha!) and now I know he had plenty of breaks, drank 10 gallons of water, and enjoyed himself immensely luxuriating at the pool… what a day. Who would want to come home to boring parents after that? I can’t wait for school tmo. He is not enamored anyway…and after a Sunday like this? So help me.

As for Ben, Dave and me – we got a bit of a late start due to Hood Canal bridge closures, two in a row, so we did Mt. Walker for a warm-up hike. The rhodies were in peak form, though, so it was a great climb for a hot day. Fairly short but steep enough to feel a burn. We hit ice cream afterwards. I have never indulged before, but lemon meringue? On an 88 degree day? I could NOT resist. Here are a couple pictures of the day. 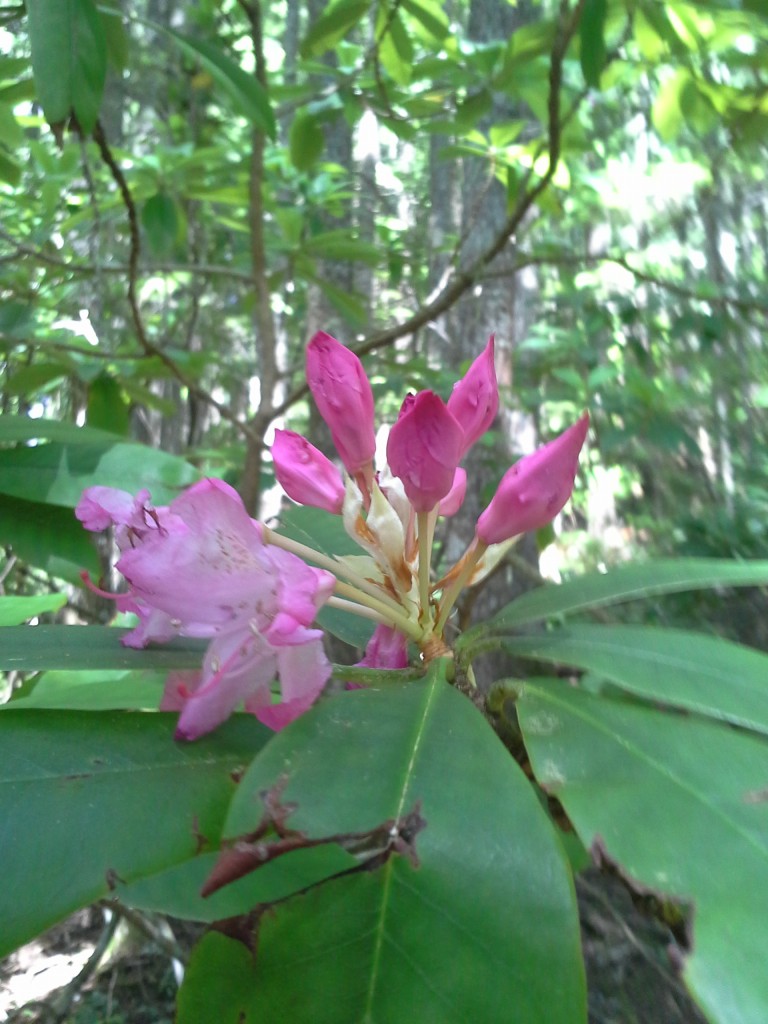 The wild rhodies were at peak bloom toward the summit! 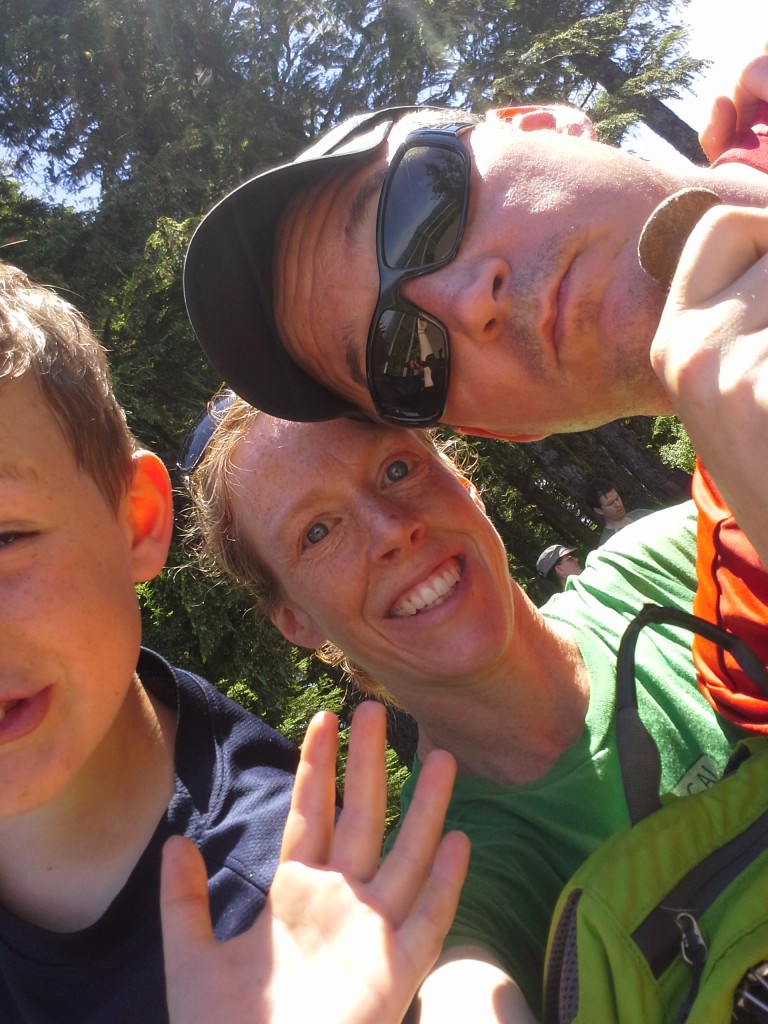 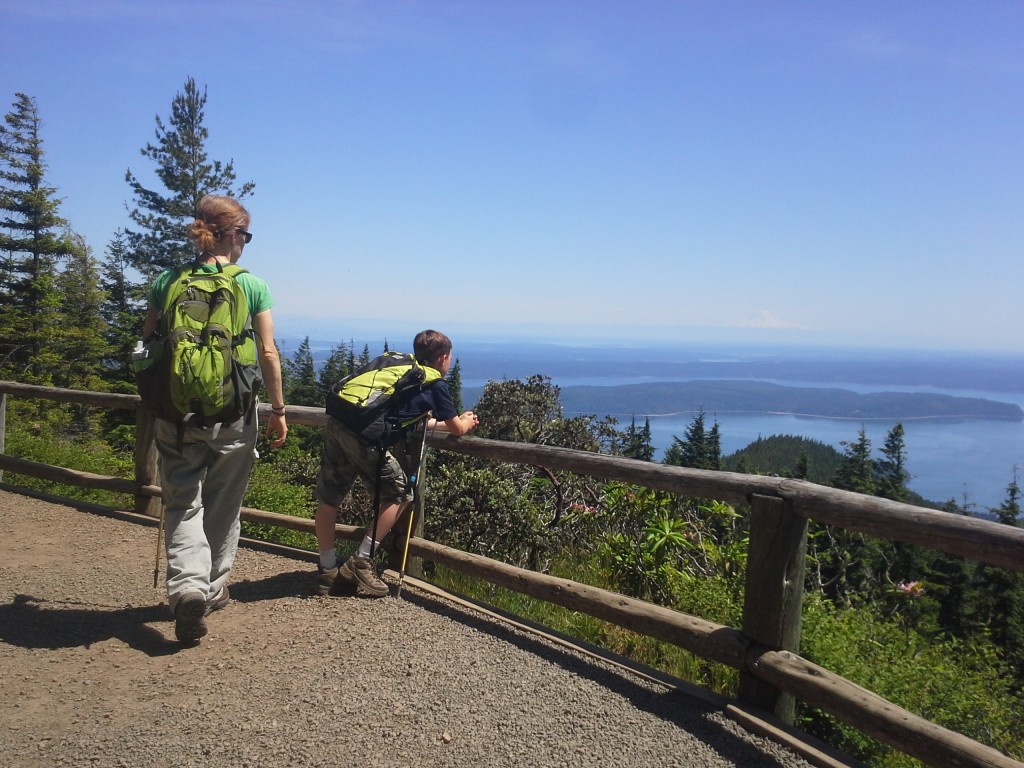 South view point – you can see all the way to Seattle. 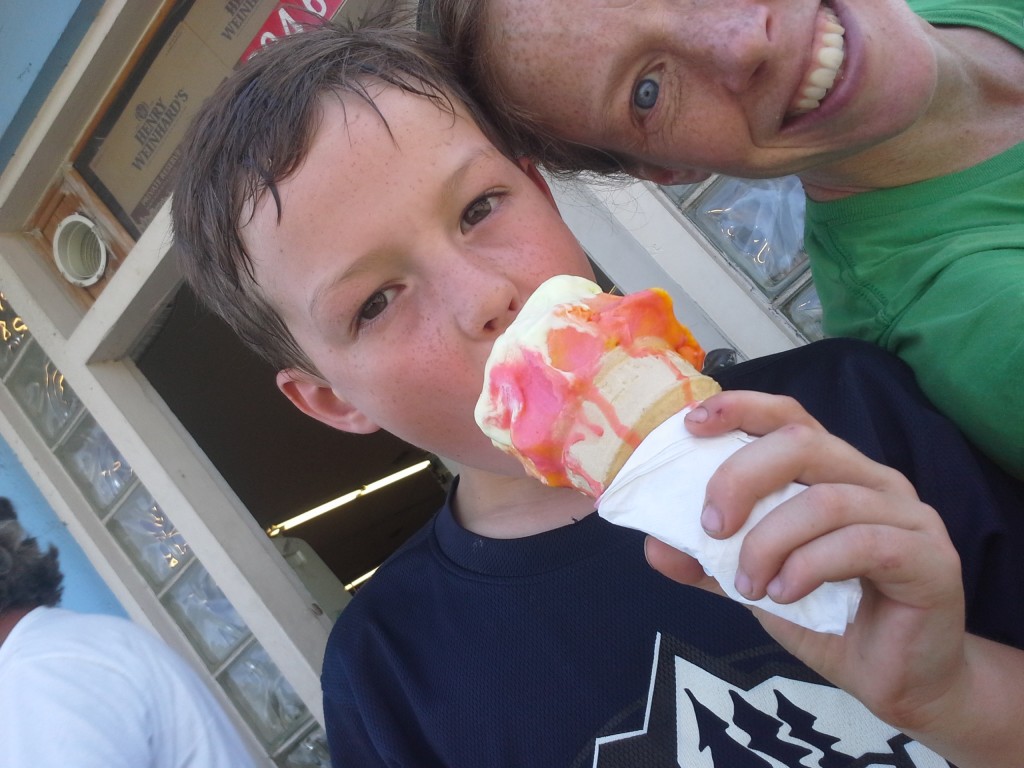 Lemon meringue is REALLY good. Ben got sherbet, too. He was talking about ice cream all the way down the mountain 🙂

Regarding move prep, things are progressing pretty well. We hope to hear about medical clearance this week. I dropped off all the records last week after visiting dental with the boys for a quick peek in the mouth. They checked out ok, as did I. Then they were spoiled with a BROWNIE at the dental clinic staff’s special lunch event…imagine their luck? A brownie at the dentist? From there we went to the Naval Hospital for medical records, and a Japanese encephalitis vaccine. I was keeping that bit on the down-low because (as you may recall, Richard) they tend to not so much enjoy shots. I went to get mine and the boys started asking the nurse what I was doing. She explained the shot, and why we get it, and how serious it can be (I’m listening the whole time, my jaw dropping more and more as I can hear them engaged with her) and get this: they came around the divider and ASKED IF THEY COULD GET THE SHOT!!!!! I was so nearly moved to tears by this. It was quite the Navy medicine day. I filled out two compliment cards – one at dental and one at medical. Everyone was so friendly, efficient, thorough and helpful. You don’t have appointments to do this, you have to just walk in, records in hand, explain what it’s for, and hope they can drop everything and see you, which they did. Unreal. From there Subway for lunch (Mom – no ordering issues this time!) and then to PORTLAND for a roller hockey tournament over Memorial Day. This is why it’s been quiet here…no time to jot things down.

Work continues. Volunteering is wrapping up at the schools, and I’m trying hard to find people to fill my shoes for Math Coach (I think I found someone great!) and Coder Dojo. It’s a tremendous group of people who donate their time to the schools. I’m lucky to know them. And I’ll miss working with them, but I already know which leadership teams I hope to join in Yokosuka…we shall see. The middle school is 606 kids 6th-8th, elementary 1700 K-5th. The base is 579 acres, and the population is 24,500 – not sure if that’s how many live on base or includes residents and workers. I’ll find out soon enough, but it sounds cramped.

This week we need to nail down government passports and how much we should rent the house for. We also really need to start laying out piles of donate/trash/sell. Not Dave’s favorite thing. Nor am I permitted to do that myself…so…tiptoe into that shall I. 😉

Lastly, were you wondering about chick mania 2.0? Everyone is doing well. The teens are out with the big chickens but have a separate eating area that the big ones haven’t figured out how to penetrate (I have studied the mind of the chicken and am not sure I should be proud to say this, but I am one with the chicken brain. I know their ways.) I watch them while lifting weights sometimes to see how they operate. I’m watching them, they’re watching me (usually it’s “happy hour” and they’re calm, preening). Odd, perhaps, but if you’re going to enjoy being a naturalist, you might as well be a strong, fit one. Takes nothing to do lunges with weights while watching the birds as neighbors run by and yell out a “HEEEY ALLI!”  The smallest babies, the two which I incubated, are also doing well, but they are not as brilliant. They are not figuring out roosting very quickly. I put sticks in the hutch instead of plastic poles. Maybe they want a more authentic experience. Ben took them out to watch a BBC program on dinosaurs on his kindle so they could get outside time, AND he could chillax after hiking. They were mesmerized, little dinosaurs that they are. Scary that birds can be sucked in, too. They didn’t much like the spooky music documentaries employ to amp up the drama, so they moved on in a minute or two. I’m very relieved all the extra chickens are doing well integrating. That could have been a VERY high-maintenance proposition precisely when it would have been not so helpful. The teens are probably, at this moment, nearly 9pm, finding their way into the big coop and squeezing into their Japanese sleeping room in a nesting box. I created a little sliding door so they can sleep and wake without being harassed. Actually…I need to go open that door. I closed it for the day…yikes!

Love to all! Family – we will call sometime soon. I promise. Your best bet is to come visit, though. Seriously. Do. We love you! Friends – come visit, too! Molly – are you in town this week???? On your way to a wedding??? Grand Forest calls you!