2 lucky coins, an opossum and a raccoon 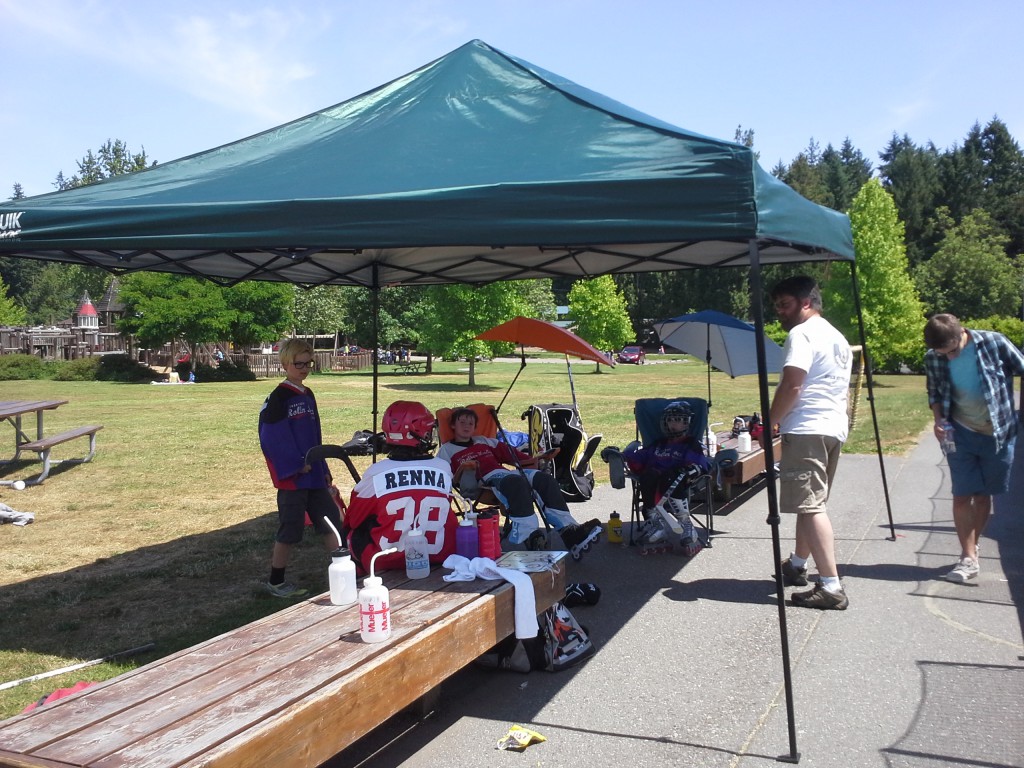 Sam, Hap and Eli getting some good coaching from Jeremy McCann during a D2 game. They got to “play up” because the next division up had a team short on players. It was a great experience for them! Very hot, and second game in the heat, but they did fine. I think they actually won even though technically the team had to forfeit due to the roster change. 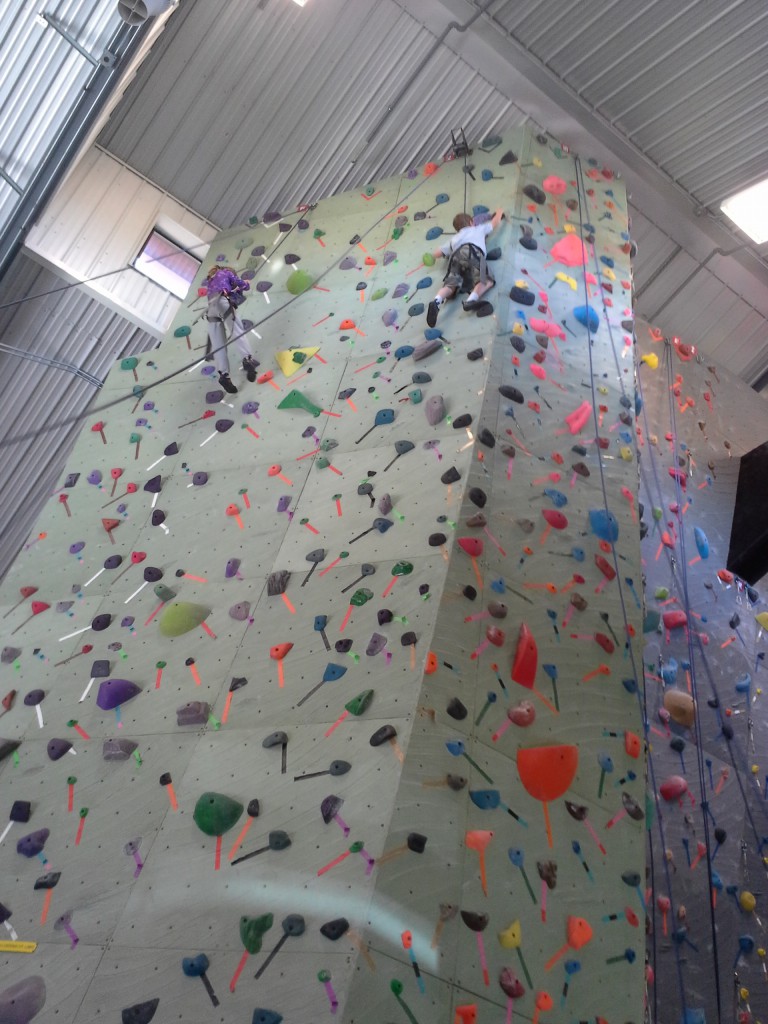 Ben (on the right) is climbing all the way up to the top! He is so brave! I don’t think I could do this. It’s a local climbing gym where a friend was having his birthday. I may need to try for my birthday. I always do something that I’m nervous about doing on my birthday. It’s a tradition…Maybe Ben will coach me?

The boys and I had a pretty productive Sunday. Ben and I sold 9 dozen eggs – took some work. People were really not in a buying mood. We had to work our sign spinning pretty hard. They must not realize eggs are in demand in the East Coast area due to avian influenza killing off 46 million birds. Oh well. I didn’t price-gouge 😉 Then we fixed a broken sprinkler timer, and finally cleared the trails of massive spring overgrowth. Sam had the machete, Ben his favorite clippers and me a weird golf-club like machete thing.

Just as we drove home from picking Dave up at the ferry (he’s been in Connecticut), Dave goes “There’s a raccoon in the coop!” I could not believe it. Truly. We drove up JUST as the marauder was in attacking our birds. A few feathers were lost, but all the birds were ok. Seriously a miracle. I went back out with the staple gun and repaired the fence. Mommy was already a little tired and cranky from end-of-school insanity, but this did me in! Thankful I still have a flock, what with the bird flu and all!!!! I was not pleased that my friends the coyotes were back, literally howling as I stapled. JERKS! No licking your lips over chicken dinner!!! I will howl back at you. I have before. You just wait…

Oh – the lucky coin bit. We hide things for kids to find on Halloween. It’s always fun to find them later…I actually found two coins and a dead opossum. Is that lucky? 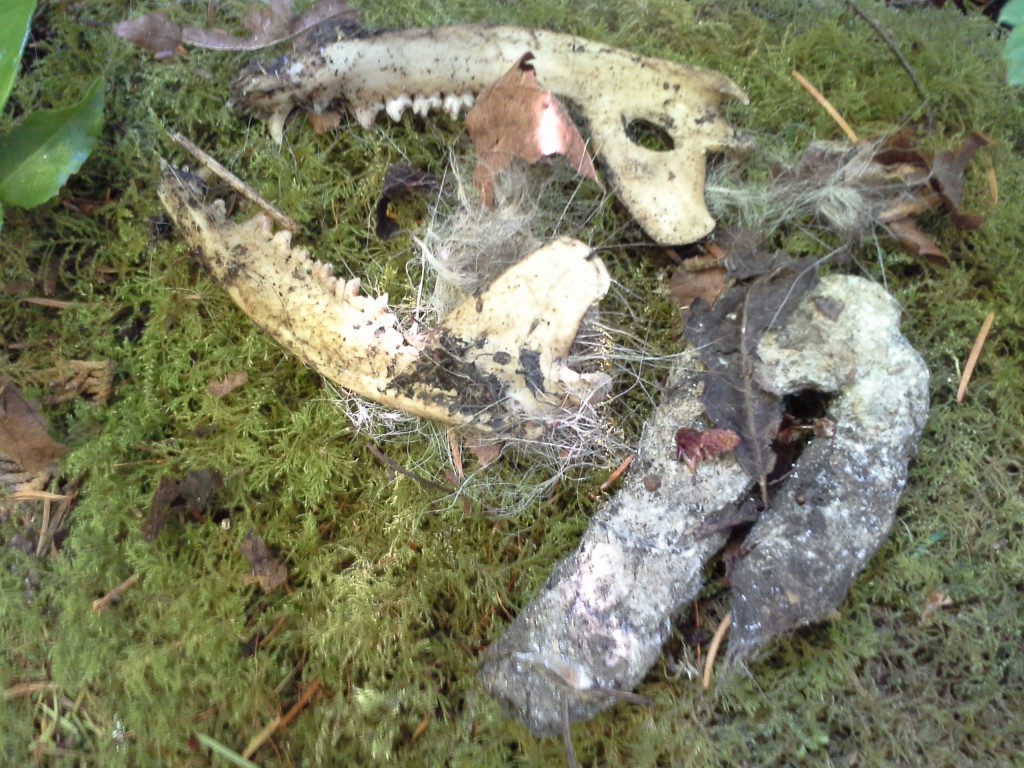 The boys and I were out clearing trails of spring over growth and I found this in a pile of hair. Ick! It smelled a bit, but then I got past that and the biologist in me got super interested. There were wormies crawling around decomposing the carcass, and I found the whole skull and jaw bones. Even a paw! All were connected by what was left of the backbone. I carried it off to hang it all from a stump so I could find it later (would also be a super cool Halloween decoration, right?). Then I found SCAT! Wow! The picture was complete. Here are my artifacts on a mossy log. Dave is disgusted. I should probably not mention I actually did think about cleaning it up and bringing it in to my little “artifact shelf” in our entryway. I Googled the jaw bone and think it’s an opossum.