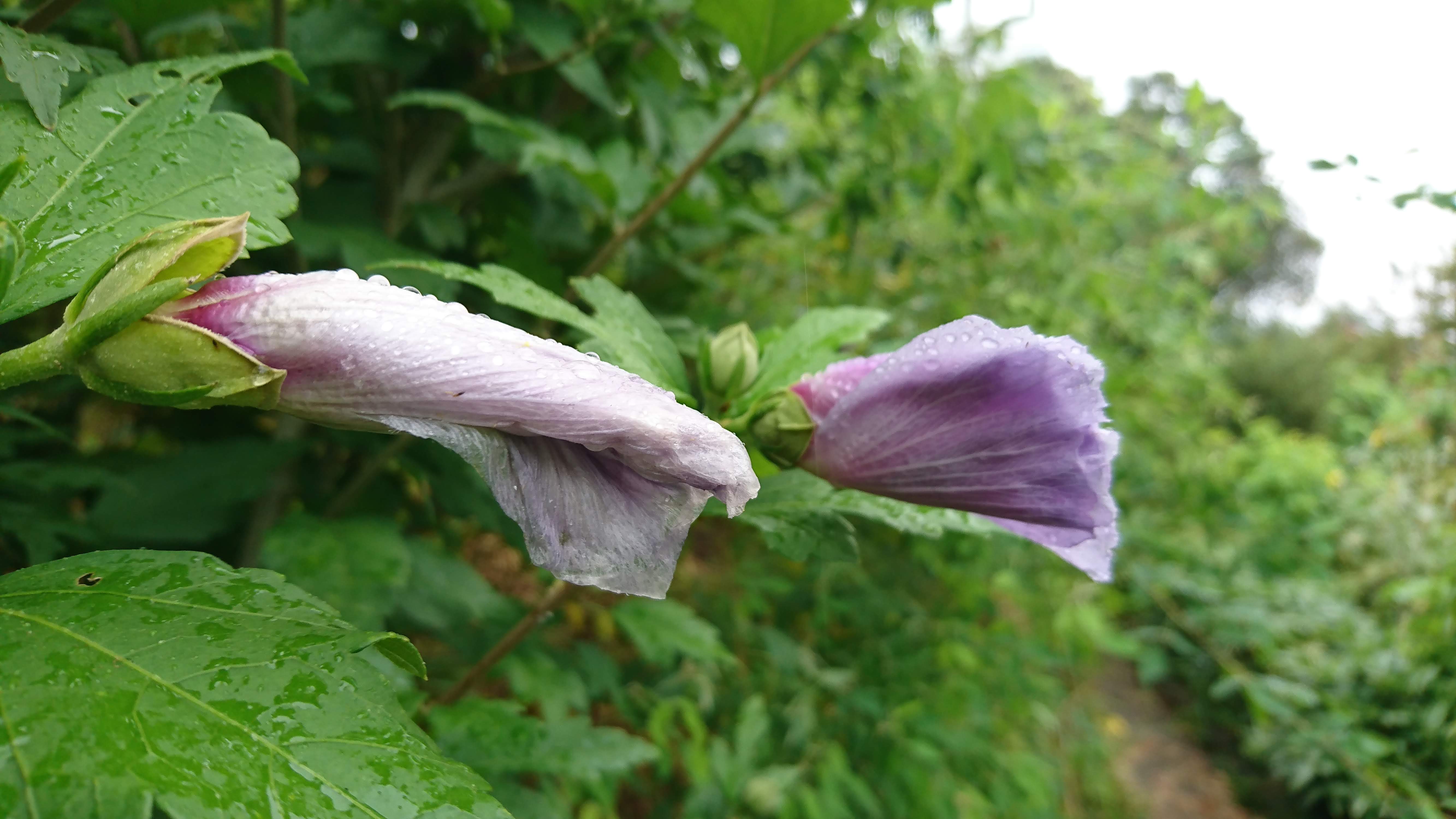 Huddled together, these hibiscus on a hill overlook the city as it awaits the arrival of Typhoon 1812, Jongdari. This is, I think, the closest typhoon to swing by us. I went out for a jog to evaluate, really FEEL the weather, to see if going to hockey in Yokohama made sense. I also took a very scientific survey of real Yokosukans going about their business to see what they would do in my shoes…I asked three people, would they go to Yokohama and drive back as the winds reach max? Or stay home? (I just actually wrote this all in Japanese for you, it’s so pretty, I hit “save draft” so I wouldn’t lose it, and guess what? It turned into ????????! urgh! I checked what I wrote in the translator and my Japanese (the Japanese I asked REAL people) was ok! Darn. Oh well. Here it is in boring Romaji letters, which are maybe better anyway.) 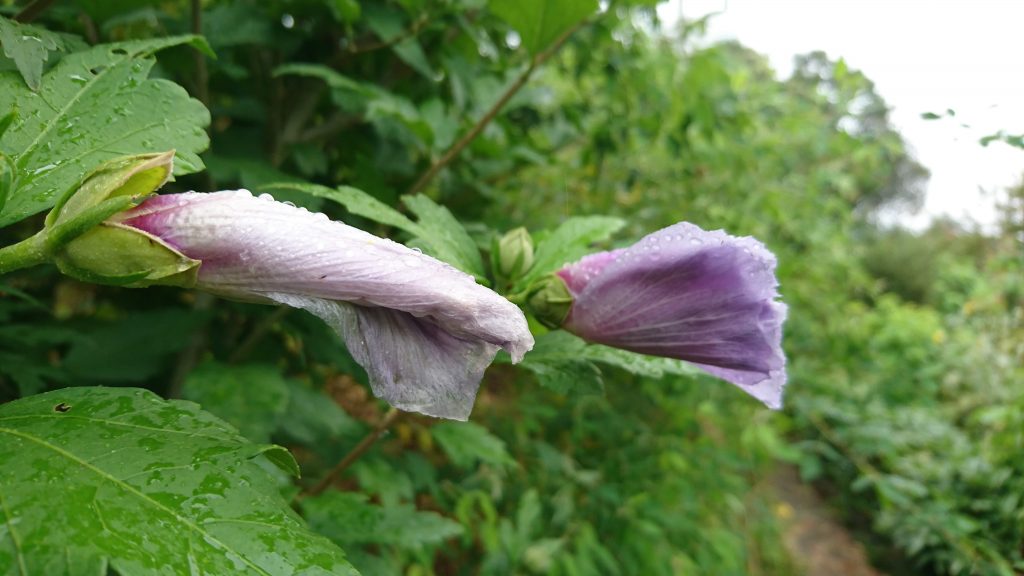 I asked a postal carrier, the gate guard, and the woman at the konbini where I bought eggs and milk (American pre-storm tradition upheld!). They all said “dame da yo!” This kind of means…not such a good idea. But I still needed to huddle with my family and make a final decision. I arrived home and found Sam had been proactive and was already in position, in the car. We went inside. Sam led the talk.

S: So, we need to decide if we’re actually going. Who thinks we should go?

S: (Checks team messages for updates. 5 kids are not going, not safe. Even kids on the first line.)

S: Who thinks it might not be a good idea because the winds are already getting strong?

S: But who still thinks we should go?

A, B: (halfway raise hands, halfway want to go)

S: Mom, that’s your American pride. What do you really think?

B: Yeah, put your Kit Carson factor down for a minute.

A, B: (no hands raised, sheepish looks)

S: OK, Kit-Carson-American-pride-decision-making aside, no one thinks we should really go. Dad, we have a decision. Let’s go play Magic.

Tomorrow morning Ben and I leave early for a kendo tournament, then somehow manage to get to hockey practice, and a going away party. Not sure how this is all going to work. Public transport definitely involved for Sam getting to practice. We still only use one car, which is kind of amazing. Most people who travel like we do have two large cars. And not 20 years old! In fact, I don’t actually know anyone who travels as much as we do. Google timeline is really cool – it tracks your location and transport methods (car, train, bike, feet, etc.) daily and provides statistics. Anyway…I’m happy to be home for an unexpected few hours and able to post a few pictures of the last couple adventures. I think you’ll most enjoy the Parks and Rec album because I actually annotated it with the crazy stuff the boys have been saying this week. They have really been making me laugh. We don’t watch any TV shows but they roped me into this one and I think it is HILARIOUS! It’s so awkward, but SO FUNNY! It’s our reward for getting chores done. (Note to parents – there are particularly mature shows in the mix, so be forewarned.) What else have we been doing? Awesome camping trips, the latest to the land of my people in the Nobeyama highlands. We stayed by the headwaters of the Chikuma river, where snow-runoff filled the clearest stream I’ve ever seen. We slept to the sound of the river, grilled steaks, ate lettuce-flavored ice cream, hiked in the drizzle the next day, and packed up in the brief period of sun between cloudbursts. That all sounds idyllic except for a few bits of the story I’m leaving out. 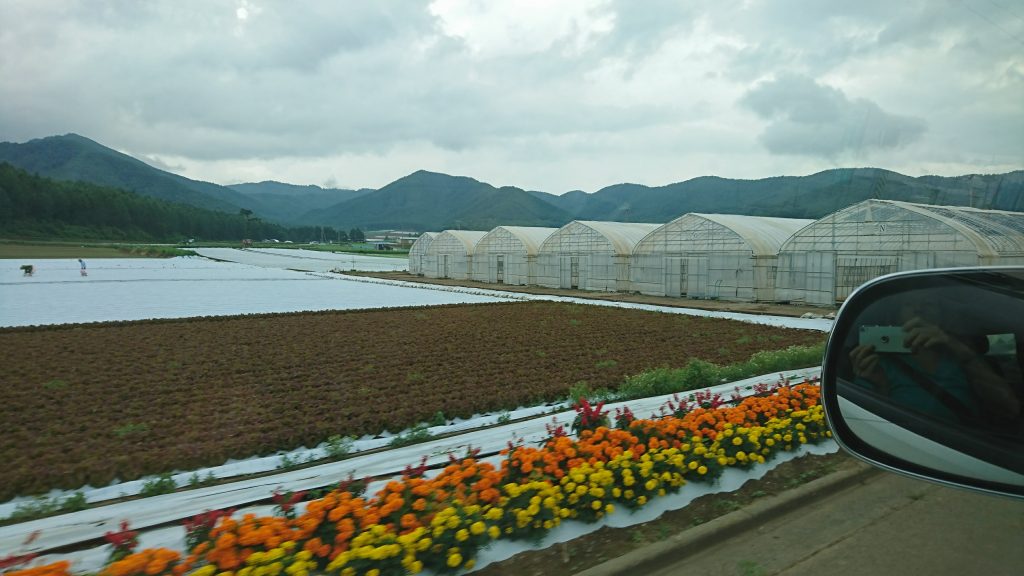 One of the guys, Sam’s friend, couldn’t come at the last minute so the group dynamics were different and I battled brother rivalry as we set up camp. We closed the camp-out with a bang, too, when rock-splitting (which was otherwise fairly injury-free) managed to slice Sam’s finger and arm. But, no eyes were damaged, and all was handled calmly. I actually really enjoyed having a quiet project to do as we did a final sweep of the campsite – bandaging fingers on a camping trip is kind of a tradition. I have a finger that still has no feeling along a hockey stick-shaped scar from when I was camping in Victoria and was trying to cut tape off a stick. In any case, this place is GORGEOUS, and Sam did end up finding the crystals he was looking for. I kept praying that he would because that was one of the reasons I was so excited to drag him from home and into the woods once again. This area is known for crystals in the granite. 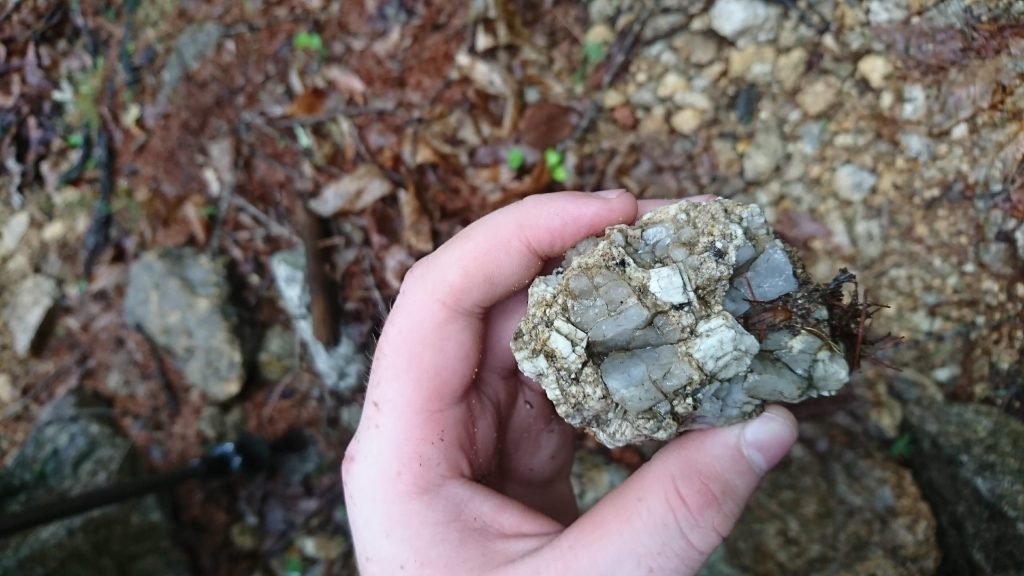 The icing on the cake, though, was our friend Tetsuya finding a CAVE with a rock museum inside! WHAT?! you say? Yes. A cave, the only one in the world, the sign advertised. And sure enough, it was. My description would not do this place justice, nor its sweet proprietors, who also run (along with their cats) a dusty ryokan and onsen in a marshland preserve. We will be back. They also apparently do some deer hunting because they had a very protective, specially-bred, deer-hunting dog on guard outside. We walked for 1km through (UNDER) the hill, and past many specimens of rock from around the world, as well as the mining of crystals right in that hillside. Unbelievable. Tetsuya, though, as you can see, is not in this group photo. He, the only one who speaks Japanese, elected to remain with the van. Why? we wondered. What did he learn from my stunted conversation that I somehow missed? Was it the bats we saw flitting about? Sylvana asked me several times, “Alli? Where are we going?” “Alli? when will we get out?” I did my best, but honestly, I didn’t know. And this was during the week when the world’s attention was focused on those 12 soccer boys in a Thai cave. I had faith we’d emerge soon, but believe me, I was thinking about earthquakes… 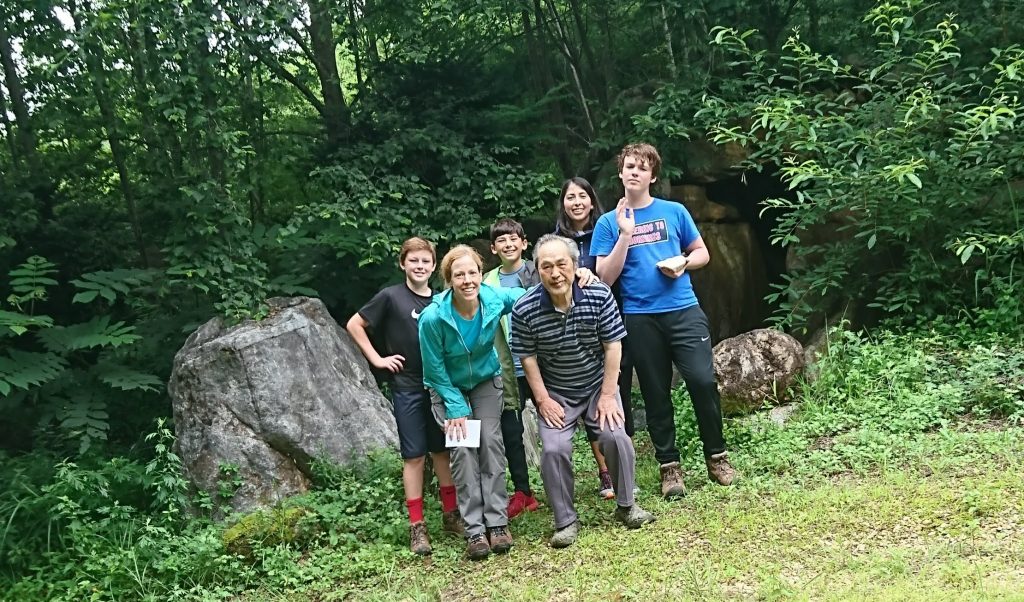 Well, we all emerged! 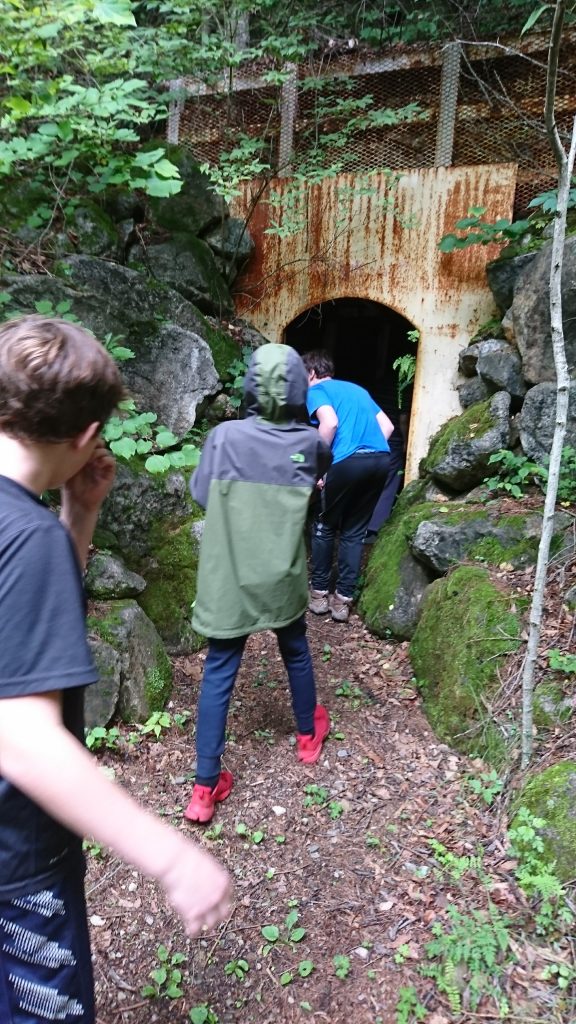 Cave entrance…what have we gotten ourselves into!? 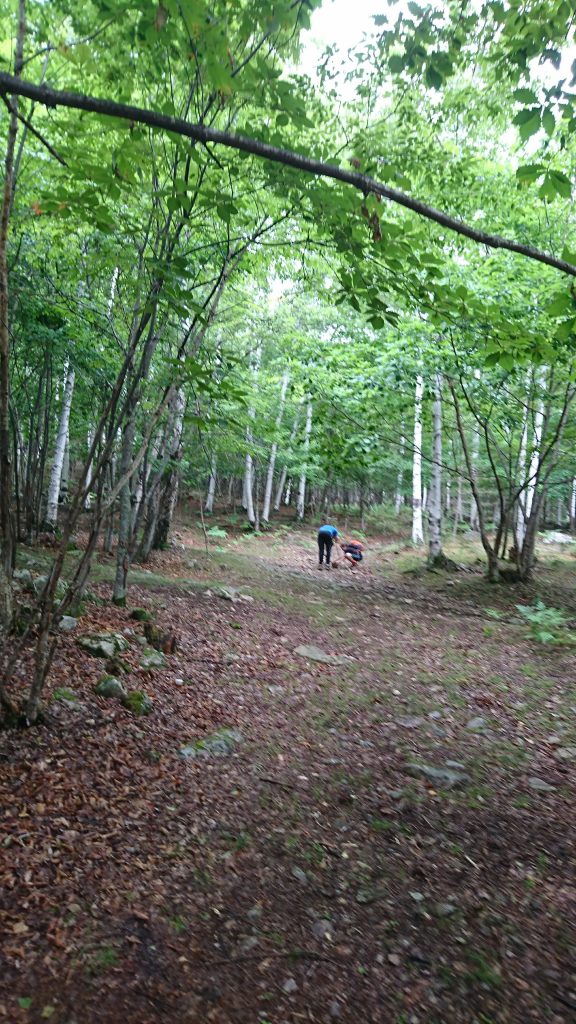 Looking for crystals on the hike. Brothers in a peaceful moment. 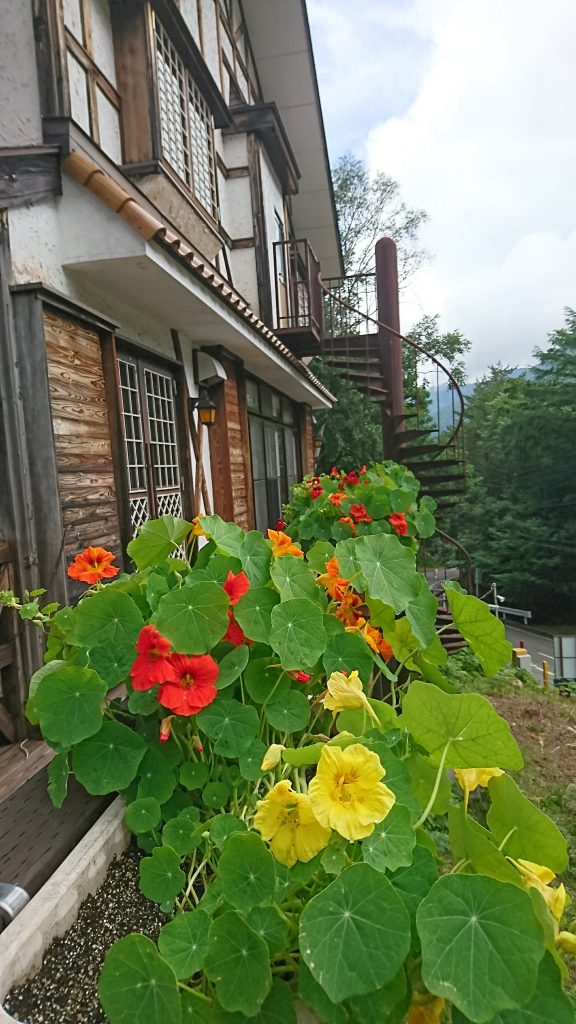 The lodge near the campground. 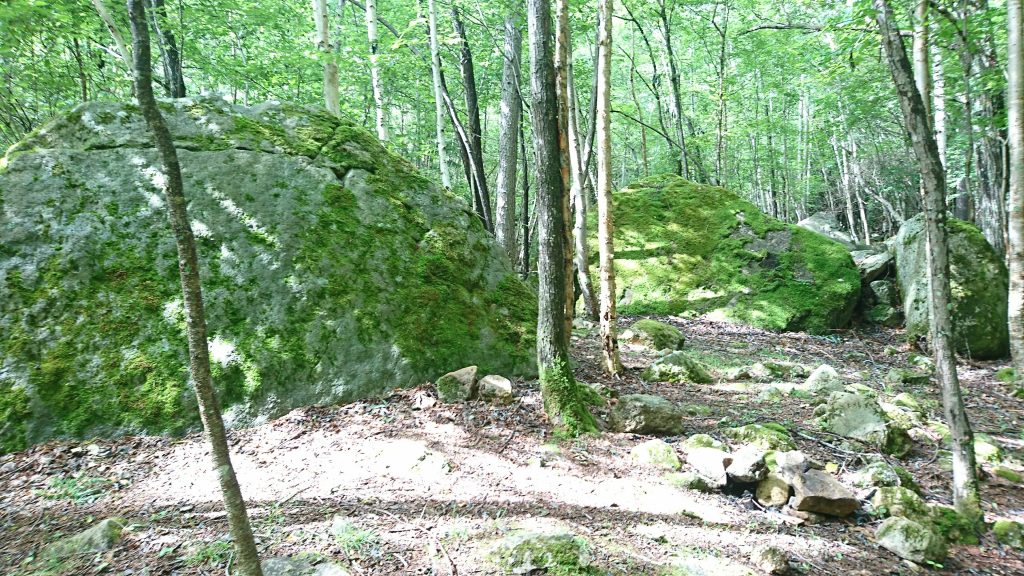 Huge boulders covered in moss, and a birch forest that will be lovely in fall, too. 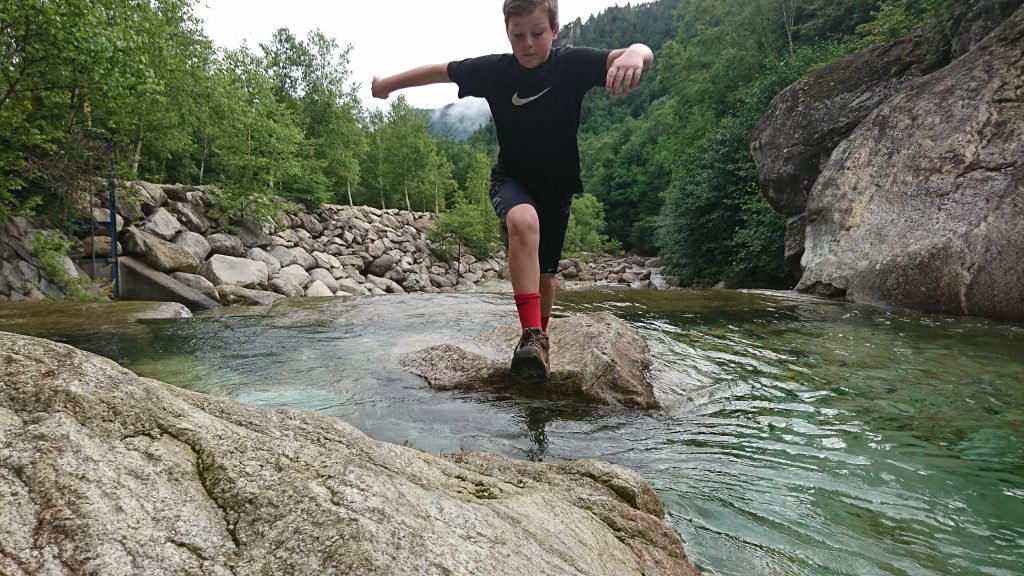 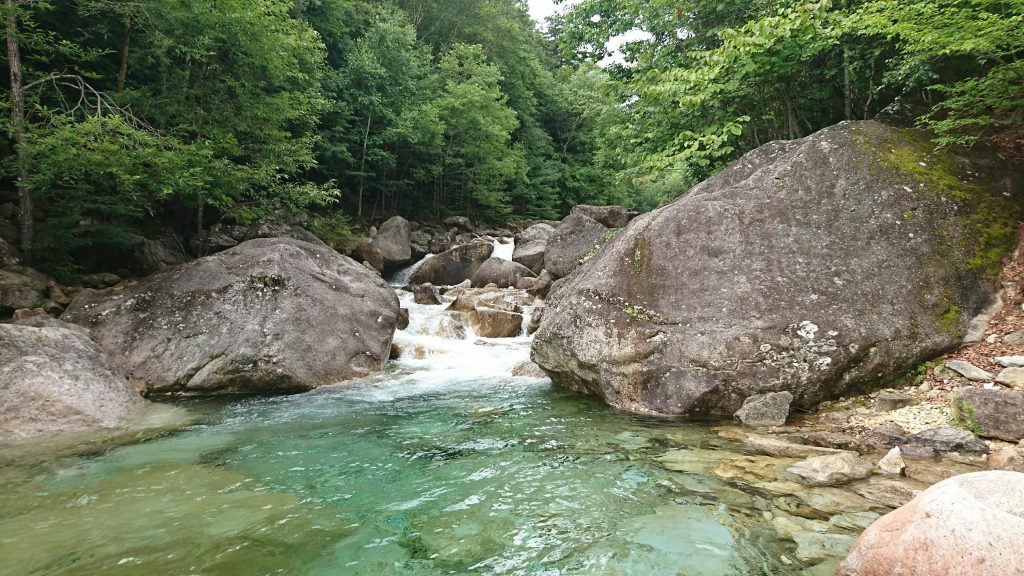 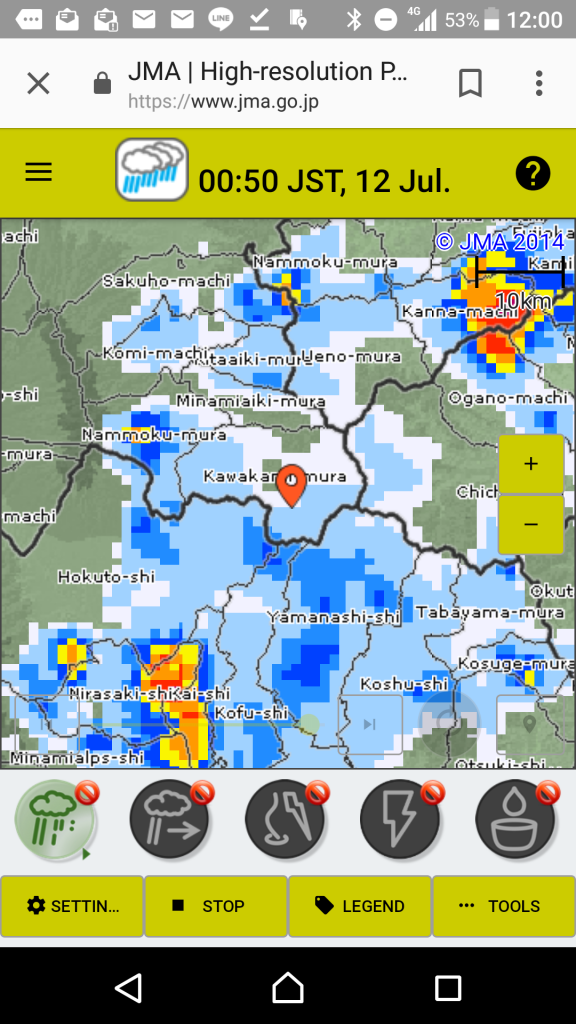 This is me at midnight, finding the Japan Meteorological Agency website, real-time ground inundation and landslide risk map. Love it. I can’t read kanji to pick the area where I am, but that little pin is me! I kept thinking…this is how the Boy Scouts always get in trouble – camping in a slot canyon, or in a valley during a flash flood. And here I am, right next to a beautiful river, as a typhoon goes through south of us. I found that the worst of it was just south, and we would be in the clear in about 2 hours. But I still heard snorting outside the tent. And you ask, why do I still like camping? I love it. But I don’t like not sleeping. Love-hate relationship! The reward of morning is so potent, though. And the smell of campfire, and of boys outside looking for rocks. There’s nothing like it. 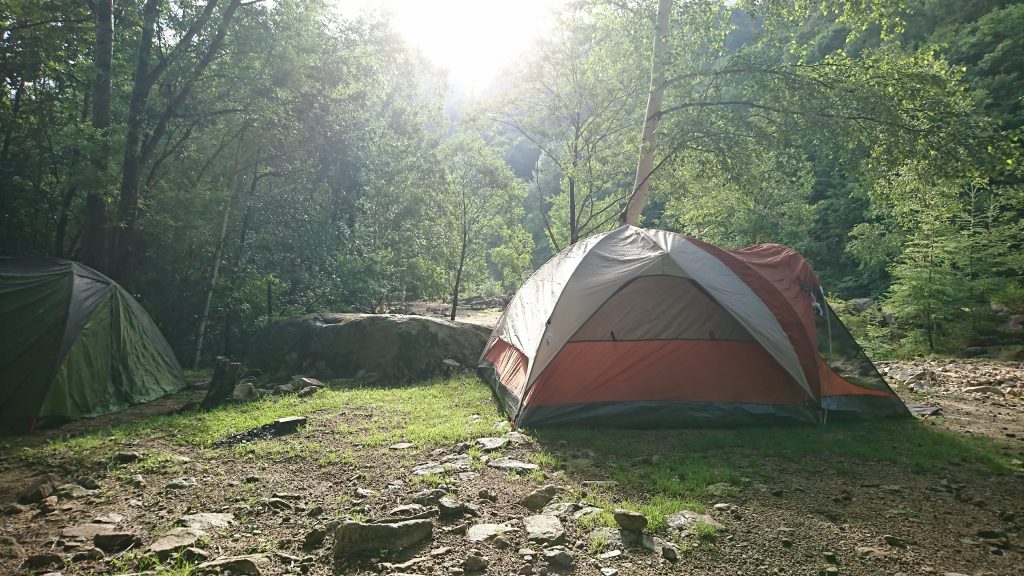 Morning at the campsite. All is well. 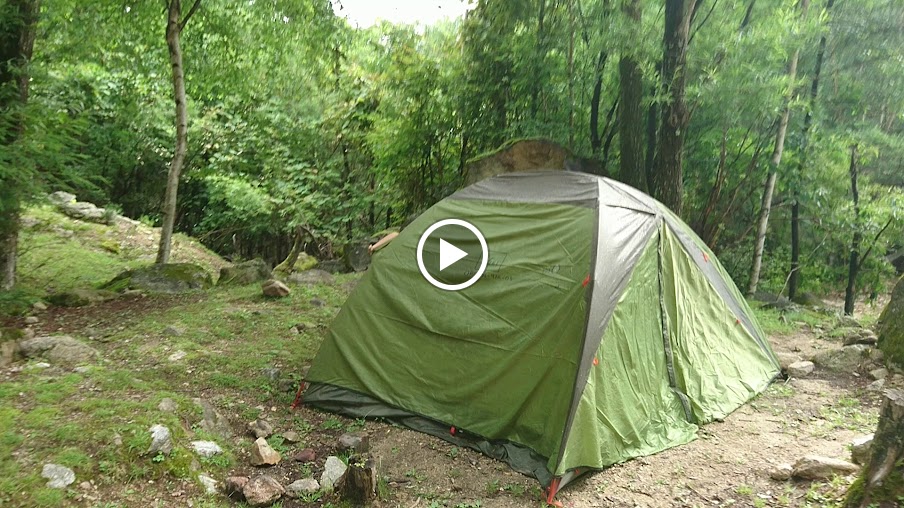 This video is a real hit with kids. It’s trying to wake Sam up. Enjoy. 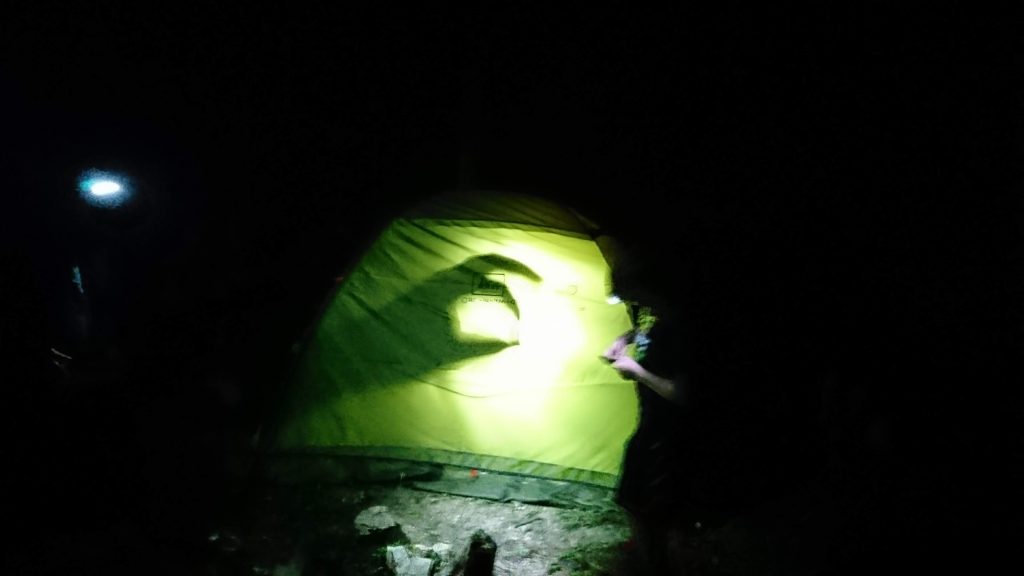 Sam entertaining from inside the tent. So funny!

We also got Dave away to Hakone, finally! This area is only 2 hours away, but when you go, you want to have time to really explore. Time is hard to find, though, for Dave these days. We grabbed a night and went for it! I got reimbursed for the ropeway and pirate ship rides we couldn’t do last time (tsuitenaiyo!) and felt like this time we were golden. Still, weather was sketchy. We had to do outside things on day 1. A must-do is the Old Tokaido Road, a section of road that people used to travel from Kyoto to Tokyo. This section is still preserved, and one place I love is a tea house where people rested after going through the checkpoint – the Amazake Chaya. 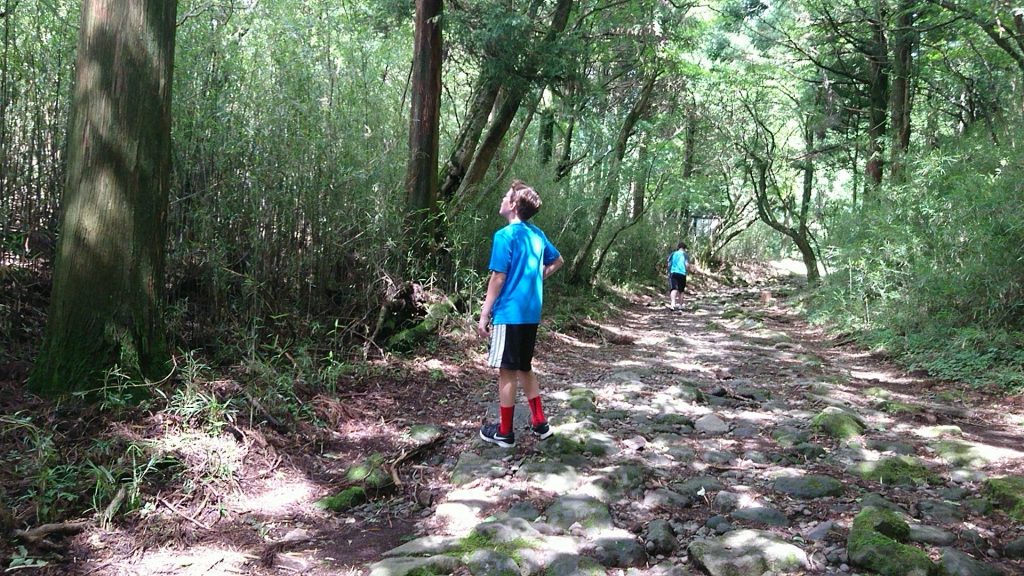 Old Tokaido Road hike to the Amazake Chaya where we got to see Koto again! 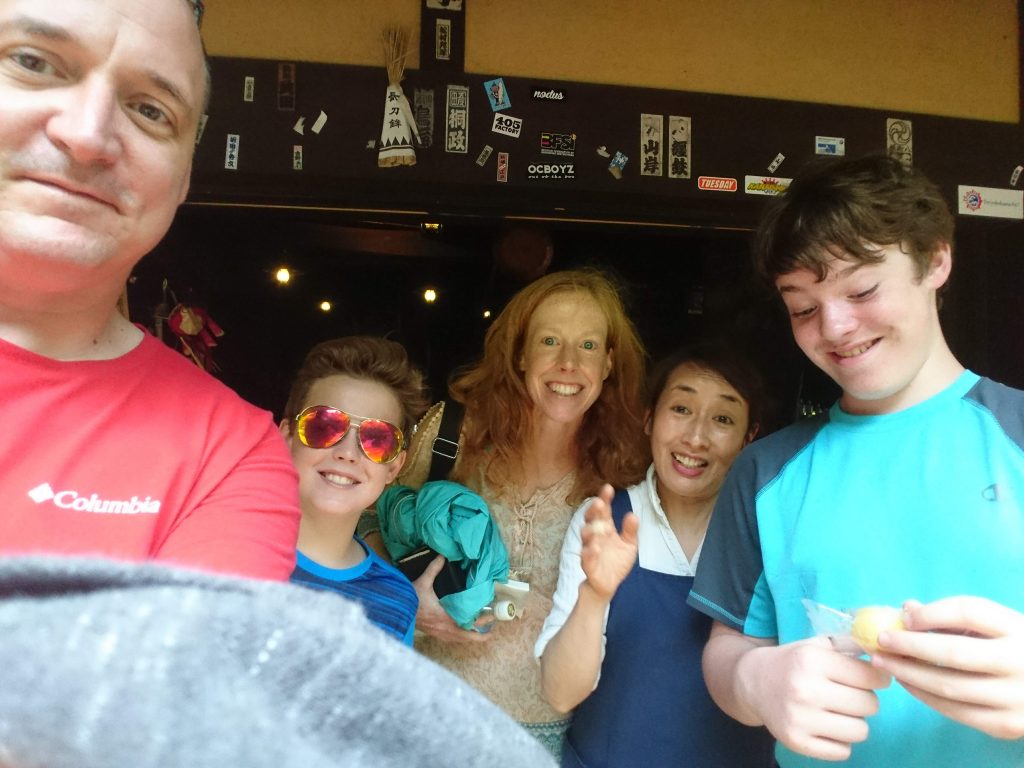 Koto-chan! She is the sweetest! She actually studied in Tacoma for 4 years! I always make the Amazake Chaya (tea house) she runs our first stop. This was Dave’s first visit. Her family has been running this for 14 generations. Kumiko – you’d love her. She has two boys, loves to make clever things in her kitchen, and is so nice. 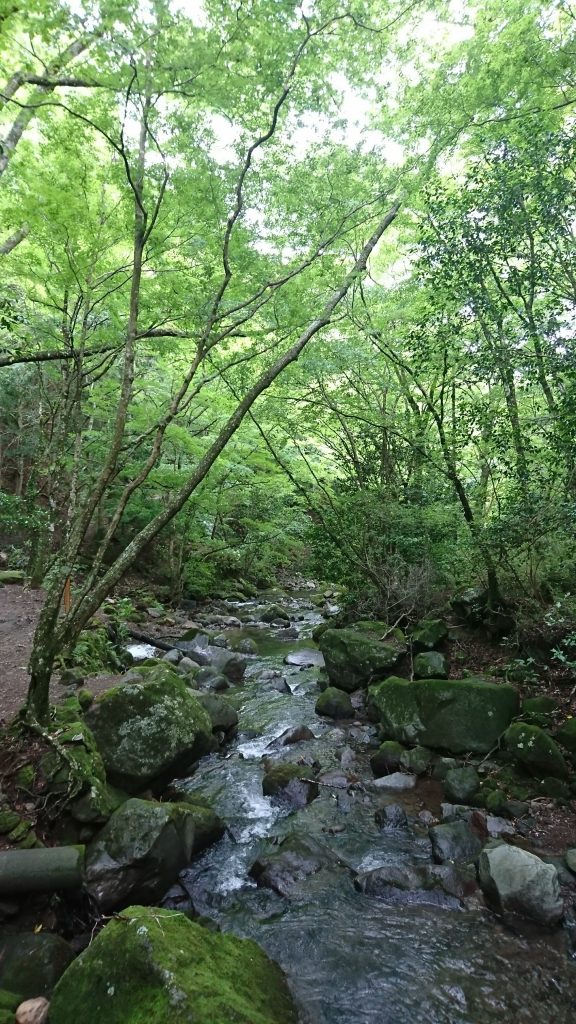 A short, solo, Hakone hike before another typhoon went through.  And I got to see a BIG TOAD on this little walk, and a special freshwater crab who showed me which stairs to take back up 🙂 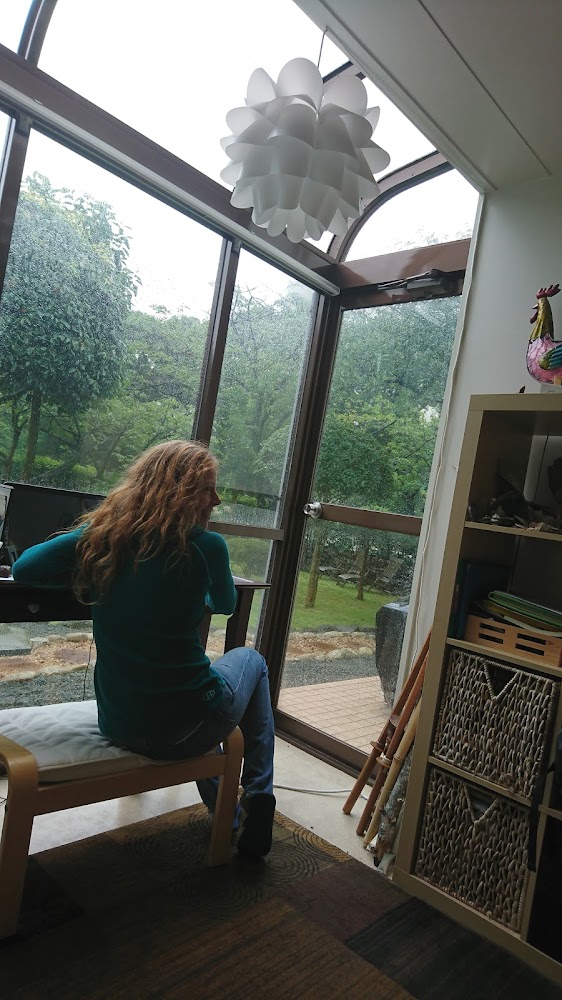 Since I’m in survey mode, I think this typhoon-styled hair (me, right now, back from a jog) is my best look. Dave and the boys give it a 3 out of 5. My baseline, they say is 1.5 out of 5? So, indeed, it’s an improvement. What do you think? Dave says “the messy look isn’t ACTUALLY messy.”