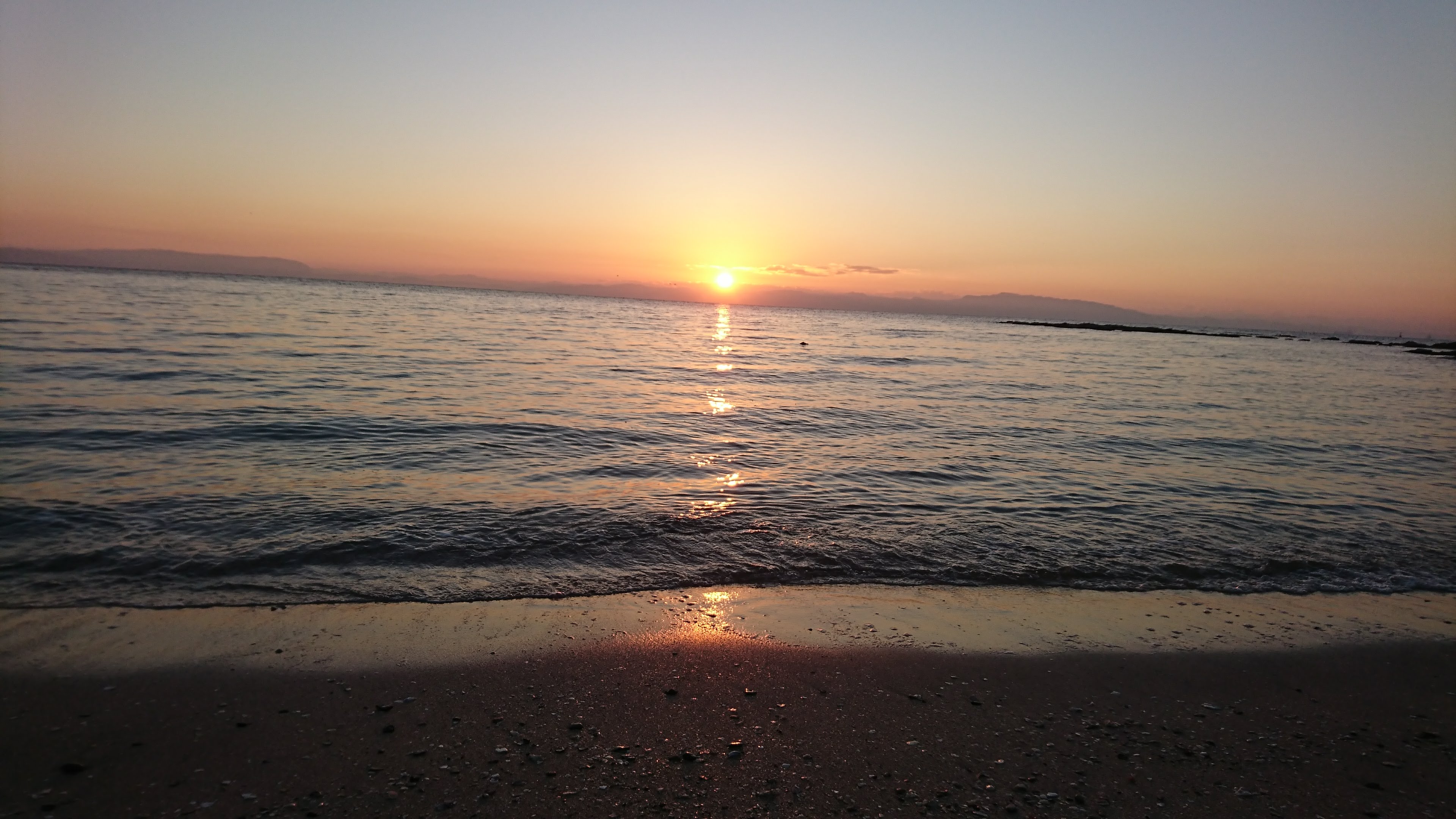 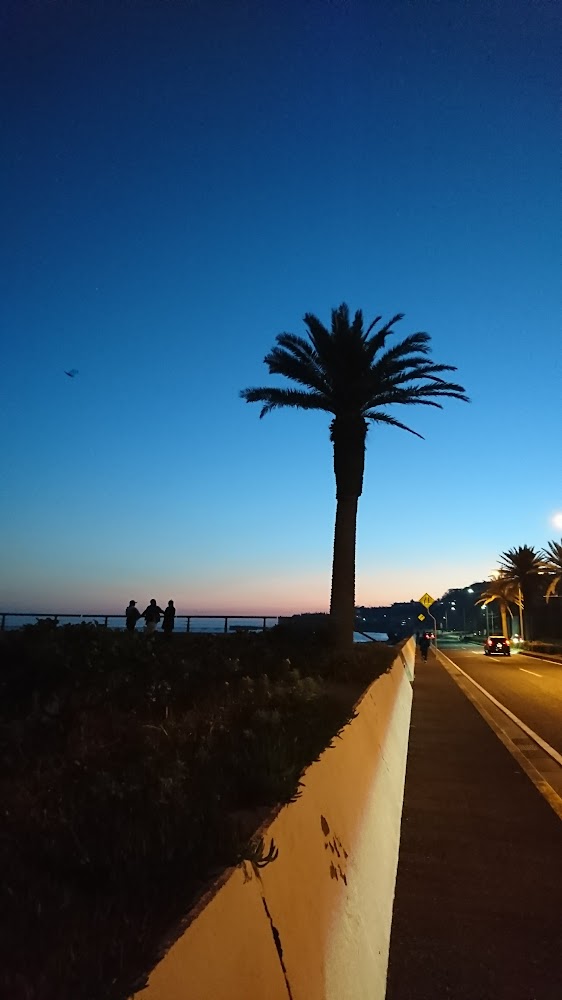 This morning is the perfect counterpoint to last night’s vigil. My alarm sounds off at 5am. I cannot remember for the life of me why in the world my alarm is going off when it is dark out. Then I remember that I had planned to run 11 km to catch the first sunrise of the New Year’s, as is Japanese tradition. (hatsu hinode) As soon as I remember that, my heart rate increases and there is no turning back. I throw on smoke-scented clothes from last night’s fire (from 4pm-midnight, so very aromatic!), throw down coffee and fizzy vitamin C drink, grab a granola bar and a headlamp, and many layers. It is only 4 degrees Celsius, but clear. I know I will be plenty warm running down, but once at the beach I want to look for more pottery fragments for my stockpile to write kanji and names of friends who linger in the kitchen chatting. We sign those like a guest book. 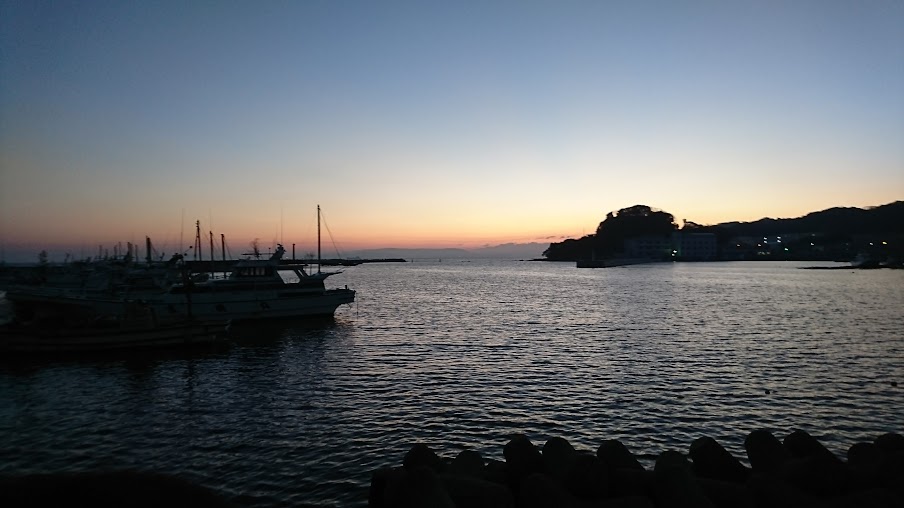 Above is Hashirimizu, a sleepy fishing village near where we practice Kendo. We drive by this little bay every evening after practice to grab a dessert, or a second dinner for Ben!

Although I’m leaving about 9 minutes later than I’d hoped, the jog goes according to plan and it seems like I will catch sunrise right where I hope to land, on my favorite beach. I see many revelers out this year, compared to last year. Skateboarders are out joking around and laughing by the vending machines, maybe getting some coffee, many older people are riding their bikes down to the beach to catch the sunrise, and other people are parking their cars anywhere they please while they wait for the sunrise. It is like running a marathon with fans along the way. 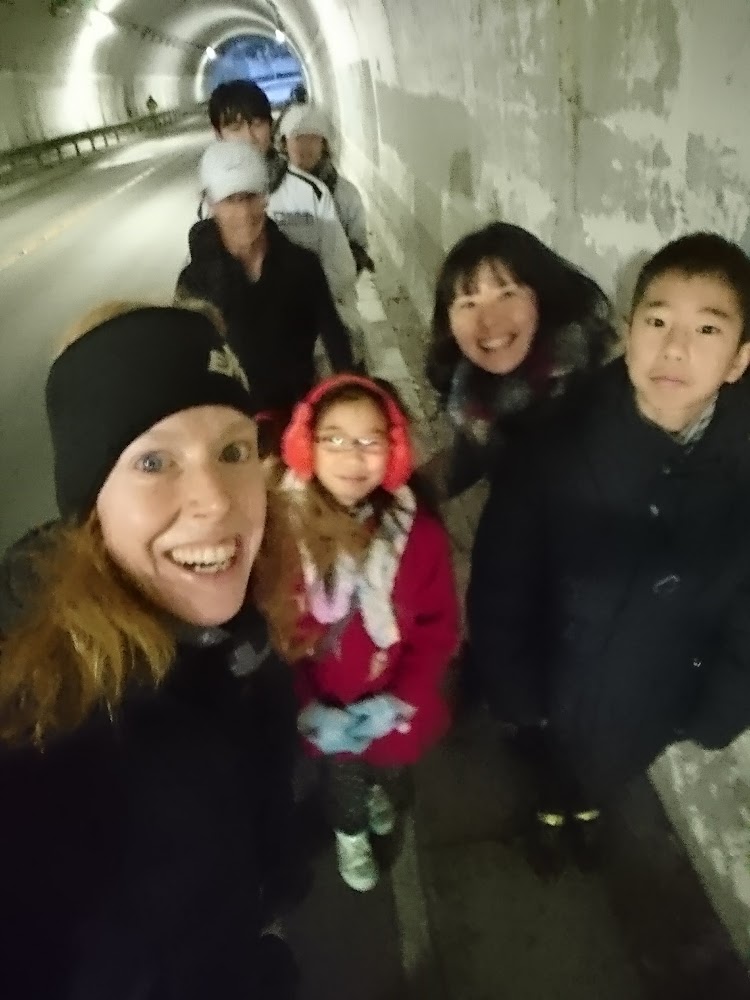 As I trot through the last tunnel on the way to the beach, I squeeze past a mother and three children. As soon as I look left, ready to say happy New Years in Japanese, I realize that these are some of my Kendo friends! I actually ran into them last year, at Hashirimuzu Shrine after sunrise! The tradition is sunrise, then shrine, then home to eat special New Year’s cuisine, which mothers typically cook up in advance so they don’t have to cook for the first three days of New Years. Of course many people now buy the “osechi ryori” instead of cooking all of it. A mother I chatted with at the bus stop later bought half and is making half. 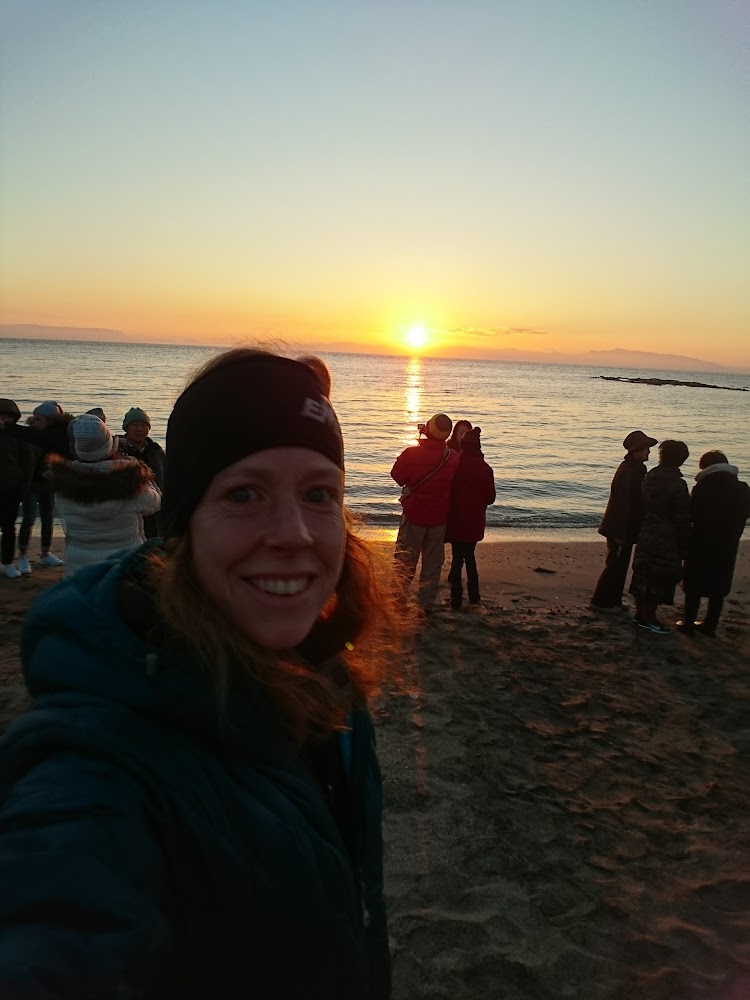 Two years in a row is quite an amazing tradition to fall into, and an extremely serendipitous way to start this year. As I was running down wondering about my timing, I decided that I would be happy to be wherever sunrise caught me instead of me catching sunrise by plan. I’m really happy that that I was caught in a chance meet-up with my friends! I feel a sort of kinship with that family, and a few others in the dojo, who are part of the Japanese Navy.

I hope each of you had an equally happy start to your New Year. The 15th century samurai philosopher, Musashi, speaks of rhythm in his Book of Five Rings (Christmas present from Dave – thank you!). For example, and I’m not doing it justice because it’s from memory with a belly full of roast, potatoes, Yorkshire pudding, turnips…but in any case, the rhythm of the merchant growing wealthy, or ruining himself with wealth, the rhythm of the warrior defeating enemies or being defeated, the highest state actually being one of emptiness, devoid of ego, able to process all stimuli intuitively… That sense of being in the “zone”, being willing to allow sunrise to catch me where ever I happened to be, is what I hope for all of you. The faith that this year will afford you the grace to rise to all challenges and the comfort of many joys. 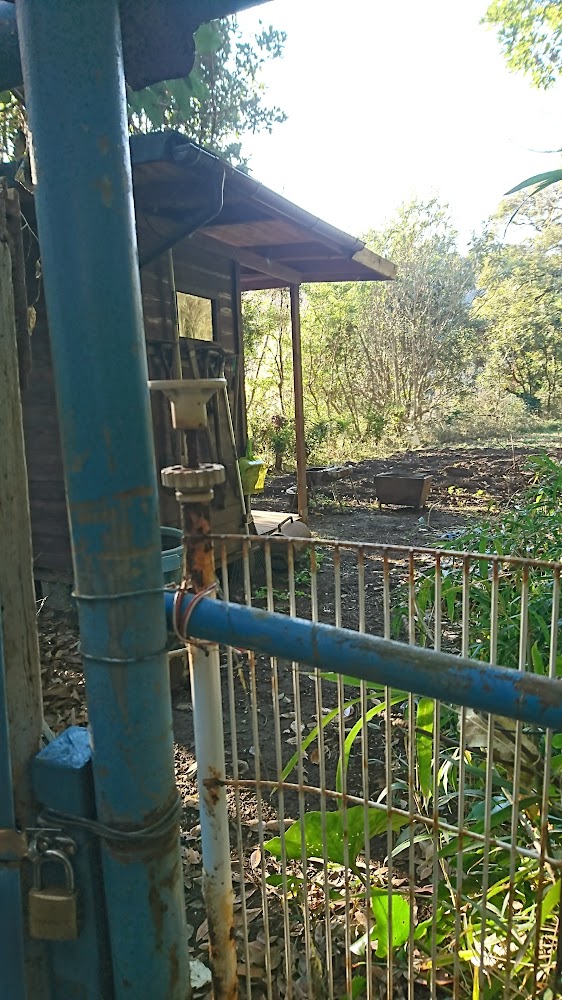 This little garden is perched to the side of a staircase leading down to the shrine. There are about 150 stairs, clinging in the forest which borders a large community park. They lead down into the back of a fishing village. Only those with reason to scoot between the fishing village and the Japanese Self Defense Academy high on the hill where old war-time batteries are preserved have any reason to know about these stairs. I have been down them before, but never noticed this tiny garden, neatly locked up, brooms stowed on the side of the shed, soil tilled, little stoves ready to cook or burn compost for warmth? Or maybe cook some rice the old way,as I do on Wednesdays? Who owns this land bordering the park? Who tends the garden and locks the gate? 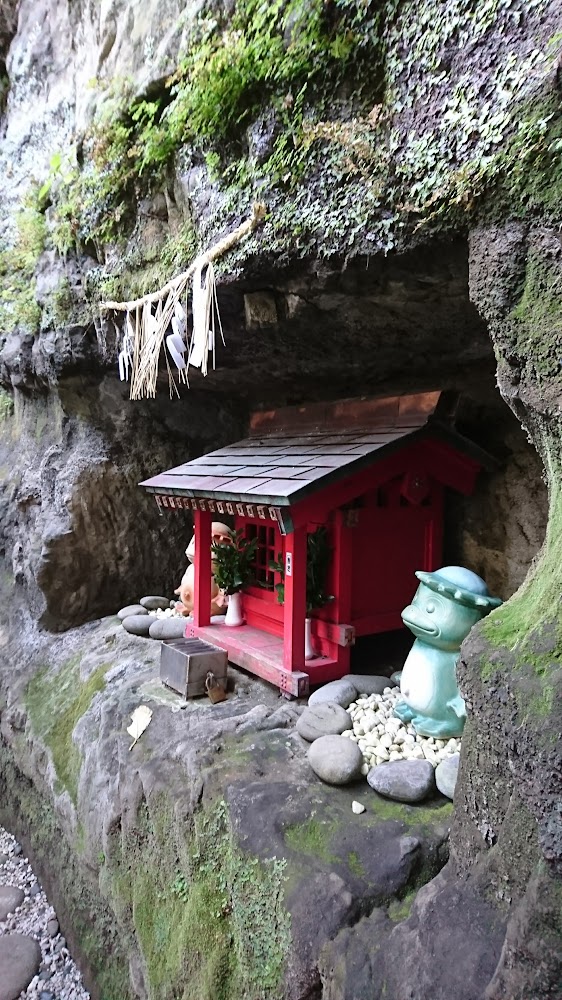 The above little creatures are Kappa. Like Musashi’s writings, and many things Japanese, I really can’t do them justice here, the folklore is too complicated. Suffice to say they’re a cross between elves and trolls? Look them up. Maybe they’re good-hearted, maybe not? I have seen their kind in all the forests that I’ve run through, usually carved into logs or painted on a stone. I love that there’s a tiny shrine to them behind the larger historic shrine at Hashirimizu. I think it’s wise to pop in at a Kappa shrine, contribute a few coins in acknowledgement, and say hello with a wink.

(P.S. Dave is taking a roast out of the oven, and I am starving and so eager to eat it. I mention to him that I really enjoy dictating my notes now and then. There’s a totally different feel to extemporaneous commentary, definitely in-the-moment writing. Like accepting your first snapshot as a matter of personal policy, no retakes. I do that sometimes, too. It helps to keep albums pruned. Writing this way forces me to be very genuine and transparent. Then Dave says, “So you like being a dictator?”) 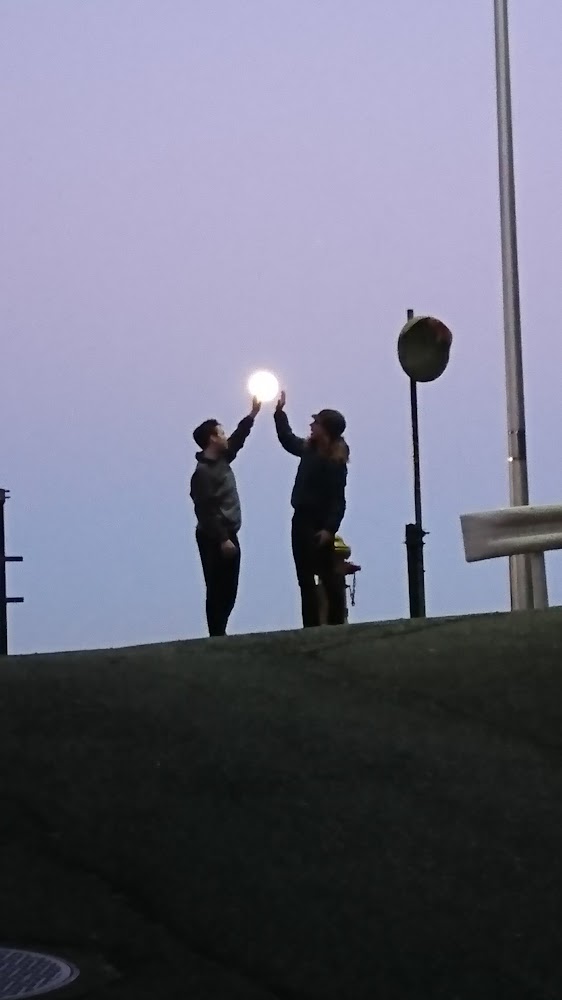 Sam and me, playing catch with a super-moon at sunset on New Year’s Day. Love you, Sam. Thanks for joining me!

PPS – Speaking of going with the flow, and deciding upon a title for this post, and alighting upon “rhythm”…I just realized that as I returned to base I was greeted by taiko drummers! This particular performance is worth watching once because it replicates the sound of a train. It’s entrancing…enjoy. 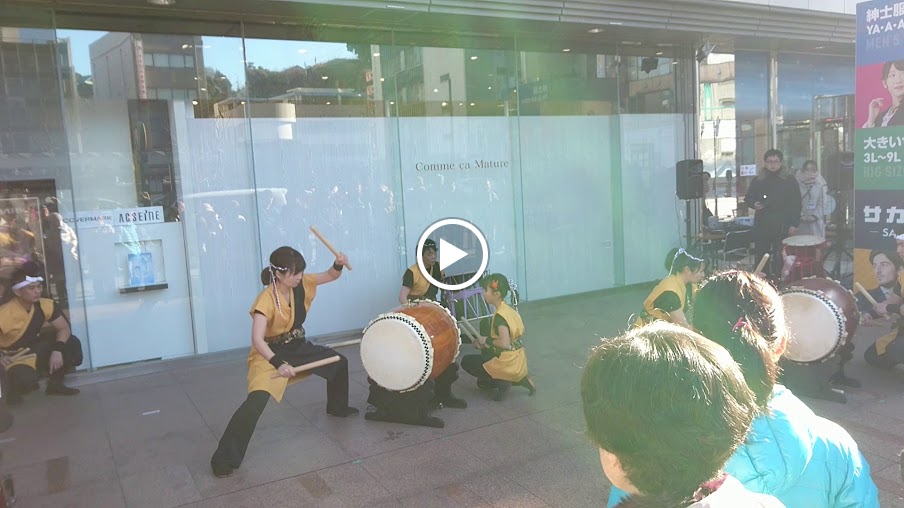