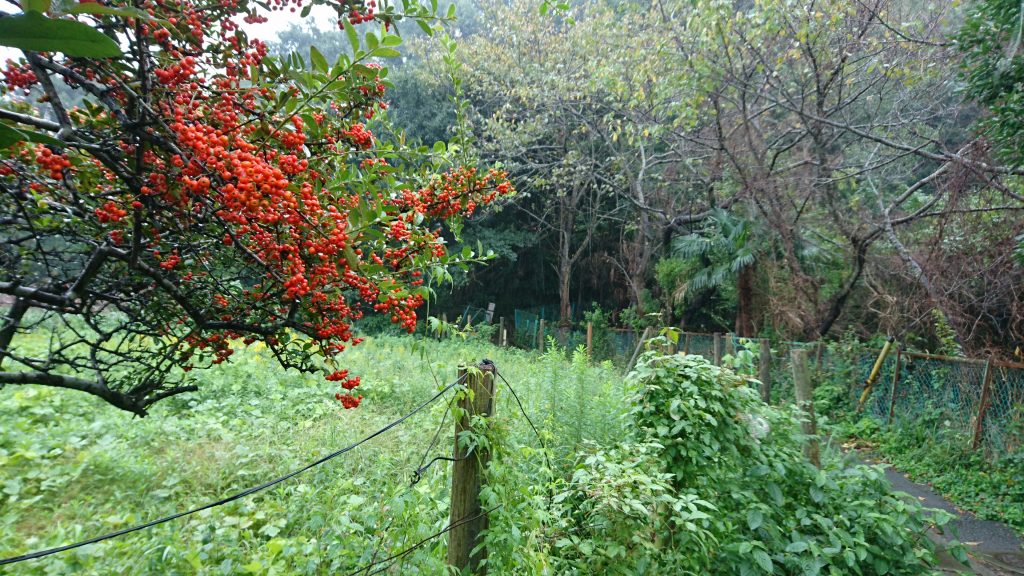 An entrance to Kinugasa Park which winds its way through a neighborhood then heads up into the park.

I was odds with myself last week, dithering about what I really wanted, and generally languished in a state of perpetual confusion over the weekend. The weather seemed to either reflect my mood, or perhaps – and this would be nice! – perhaps it was at the root of my dithering. It feels like it SHOULD be fall, it’s mid-October. But it’s warm. And the leaves aren’t changing. I feel great unrest with that. Will they be green all year? Or do very few of them change color? Or do they just take flight without ever hailing me with a gold or red wave? I soon remembered that some beautiful maples I have seen come from JAPAN. The Japanese maple. So, indeed, Japanese trees must show their colors. And with that dawning awareness grew a sense of calm that fall is still to come. Perhaps it’s a month delayed here. 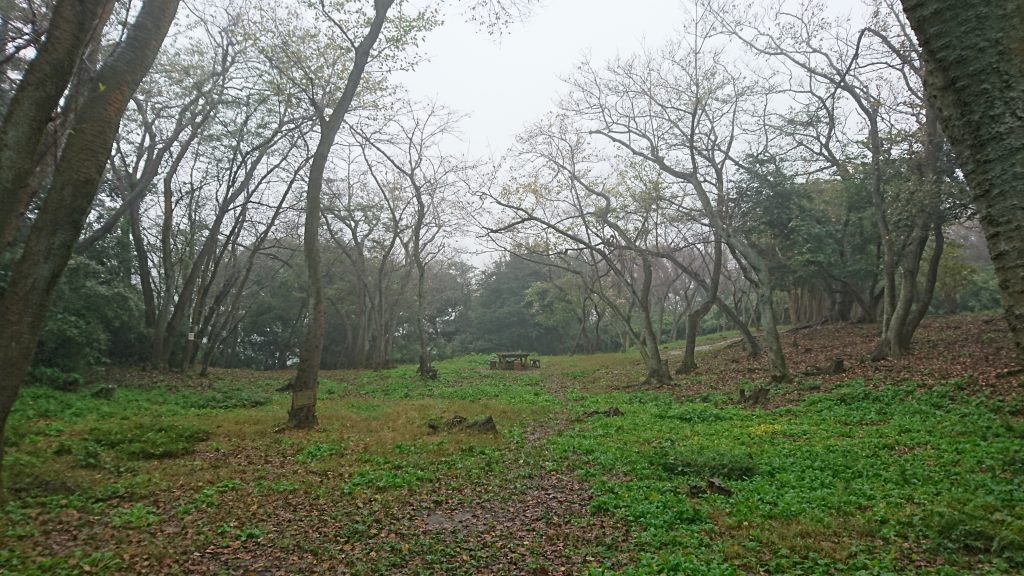 A sakura forest which will be gorgeous in spring. I like it at rest. This is in Kinugasa Park.

But with that solved, I realized there are many layers to the dithering, some of which persist… On the one hand I am really craving a long chat with a dear friend to share stories, laugh together, hear about life back in the States, and even savor hearing about old dramas rehashed.  But, my success in rapidly and totally immersing myself in the very disparate worlds of hockey, horses and now Kendo, plus work and school commitments, all within precisely two months of the wheels touching down (we landed in Yokota on Aug 24), mean that I have no time at all for such an indulgence. I want to give my best to each of these circles of people who have so generously folded me in. And as an astute reader of these notes pointed out (hi, Gillian!), it is mentally exhausting just going about life in a foreign land. Yes, you could do it in a less exhausting way, but my fear is that if I slowed down, I might just crawl, for a long time. I just can’t get off the proverbial treadmill! 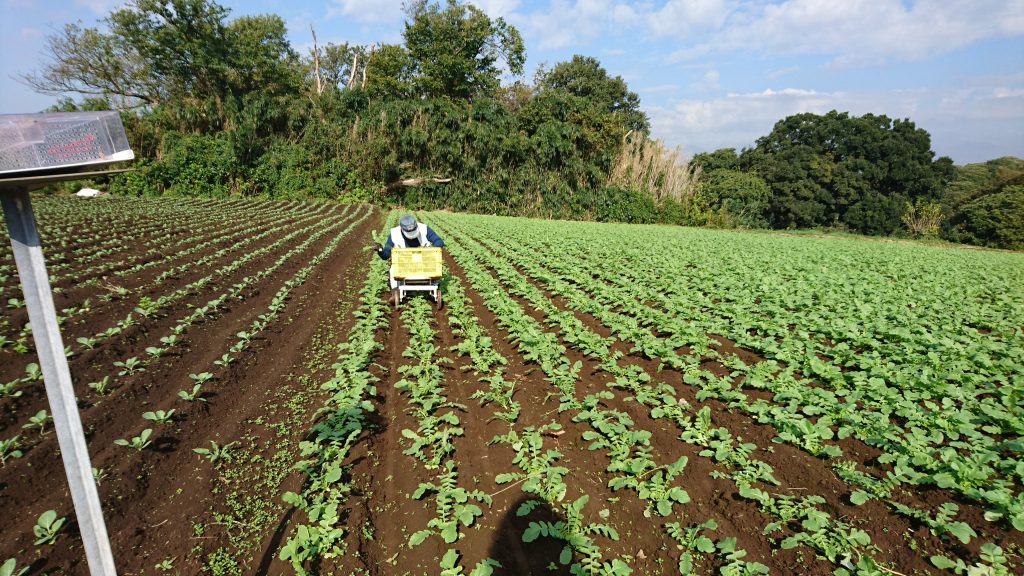 Cabbage field on my way to the farm. This farmer is harvesting little ones, or weeding. I am not sure which. But the mystery of whether the cabbage is planted by human or machine was solved last week. Humans make these neat lines!

There is one area where I am very decisive, though. At the barn. After a couple weeks riding one horse, I have been given the opportunity to try others. I am so very grateful for my days at the barn, and if you’ll indulge me, I’ll close this note with a typical day while the memory is fresh. On Tuesdays, I walk in, drop my backpack full of water, snacks to trade, helmet and half chaps. I find a home for this pack near a tight little circle of chairs around a tiny stove I covet. Like my instructor in Washington, Janet, my host runs a tight ship at her barn. There is a “parking spot” for two wheelbarrows (ichirin-sha) – marked A and B. I grab one and a pitchfork and head to the first stall. Some of them are well lit by the sun and others are pretty dark, depending on whether there are windows or clear corrugated nearby to cast light through dancing dust particles. In the darker stalls I muck by feel. I can tell if it’s super heavy with oshiiko. For those stalls I grab the heavier metal pitchfork because I don’t mess around. That stuff has to come out, now that I know the bedding is gathered up from multiple carpenters and lumberyards (scrap shavings). I was at first really worried about being judicious with the shoveling because bedding can be expensive. I really enjoy using my muscle power to help clean and contribute to this stable. I love being out there, working, and quiet. We can spend quite some time all working side by side, smiling as we pass each other (the owner and some of the other riders who also help out), me listening to Japanese news and music on the radio (many older American songs) and the barn banter. I have watched twice now as the owner and her son treat a horse who has colicked – that is a messy job. But both horses which have fallen ill bounced back quickly. They really seem to know what they’re doing. When the stalls are being mucked, the horses stand nicely in crossties side by side and wait. They also walk back and forth through very narrow spaces between other horses, ichirin-sha and even horse statues and tractors without bouncing around like skittish cats. They have some of the same decorum about them as their owners do. Last week I had the rare opportunity to watch a woman do her dress rehearsal for a side saddle competition. I never in my life thought I’d say this, but I really want to learn. Imagine having only one leg to really guide the horse? It would definitely get me to use the rest of my body more effectively, from seat bones through balance using my core. She looked so very regal in her turquoise hat with black feather, long dress coat and skirt flying in the wind as she and her mount gracefully cantered (kakeashi) around in a circle. Wow. Back to the mucking, cleaning and then riding… 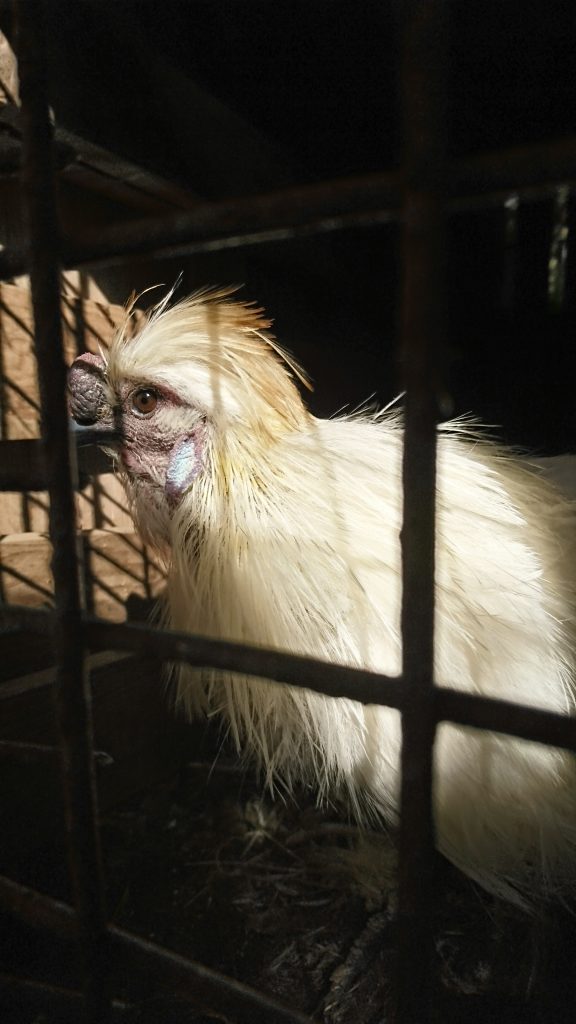 My little rooster friend at the barn! I keep snacks for him on Mondays so I can feed him on Tuesdays. I honestly think he knows to look for me now. He always heads to the front of his little coop when he sees me coming.

From time to time we’ll jot a word down on the chalk board, and this last week I was presented with a picture of a rider on a horse and the word “leverage.” My host had given some thought to what I needed to learn, and chosen the right word. I appreciated her efforts to communicate. She also used the word “pivot.” With her English coming so much more easily now, I am not going to win the race to speak Japanese without concerted effort! I write things on the board that I have learned, like the names of the ladies at the barn, “thank you very much” and other minor expressions, even the hiragana characters. It feels like a frontier school! When done mucking, it’s time to ride. 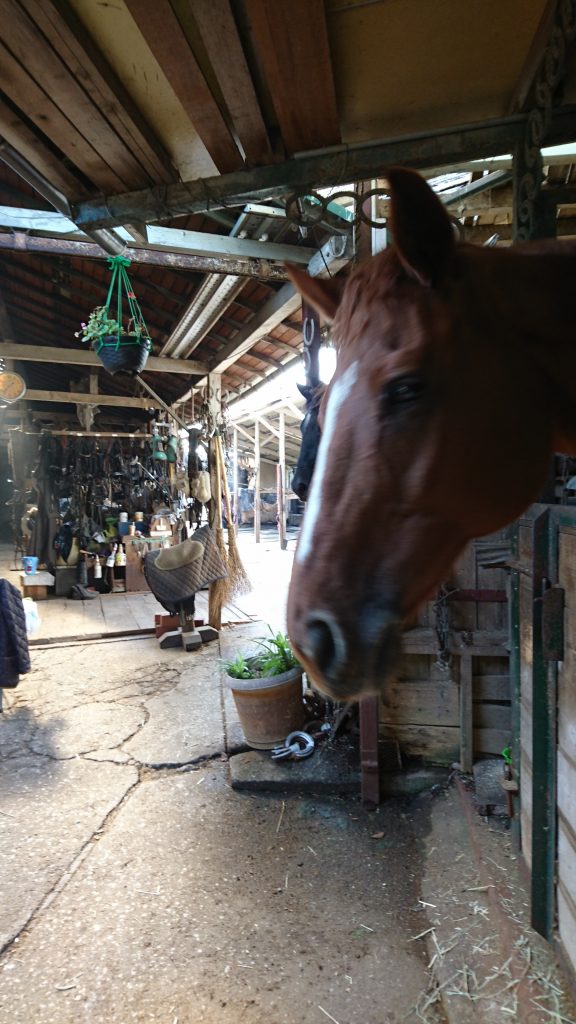 If you take a picture of a place, then study it later, you notice details previously missed. I didn’t notice the plants hanging from the rafters before. As if there isn’t enough work in a barn already, these are also nurtured along. Amazing place. Janet – I always noticed your planters as I walked Emmy over for a ride. You have an exemplary stable!

When presented with an opportunity to ride a different horse last week, I didn’t really know how to respond. I enjoy the horse I’d gotten to know, I don’t want to inconvenience anyone, and I am not really sure what I’m getting into with a new horse when communication is rather limited. I’ve gotten a few phrases down (switch pitchforks, scrub buckets, water, manure, pee, it’s a nice day, how are you, etc.). But Google translate is HORRIBLE for translating in Japanese. There’s no direct translation for anything. I’ve tried to ask the most basic things at hockey (like “where are the boys?”) and ended up doubled over in laughter after many many attempts to explain that I didn’t see them. Hilarious. Then the pantomiming starts. (Once, the coach and I finally just looked at each other, shrugged, threw our arms wide with a big smile saying “oh well!” and laughed! The boys were clearly somewhere…and it wasn’t important.)

The incredible roller slides at Kannonzaki which would not likely be installed in a public playground in the US!

So, trying to describe the personality and ways of a horse is difficult when I can say just a few basics, such as name-ashi (walk), hayashi (trot), kakeashi, migi (right), hidari (left)…turns out those latter two are pretty helpful, actually. Last week I was told going to migi, fine (thumbs-up), but hidari? Well? The son, who is an excellent rider and trains the horses, gave me a funny look. His expression was something like this – shoulders thrust up, big smile-like grimace, and eyebrows up. I took that to mean, hidari not-so-good! I found out quickly enough – this horse would much prefer to run into a gate or a fence than turn left! The head goes left…but the body? Not so much! I was mounted and dealing with this when my instructor asked – “Want to jump?” This is where the dithering would set in for sure back home in the States. Jump. Now…let me think. Have I warmed up enough for that? It’s been 36 years since I last jumped a horse. Probably not a good idea. I need to get to know this horse better. I need a better seat. Heck, I’m riding in sneakers waiting for paddock boots to arrive. Here, though? No way can I ask any clarifying questions nor even share my internal deliberation. 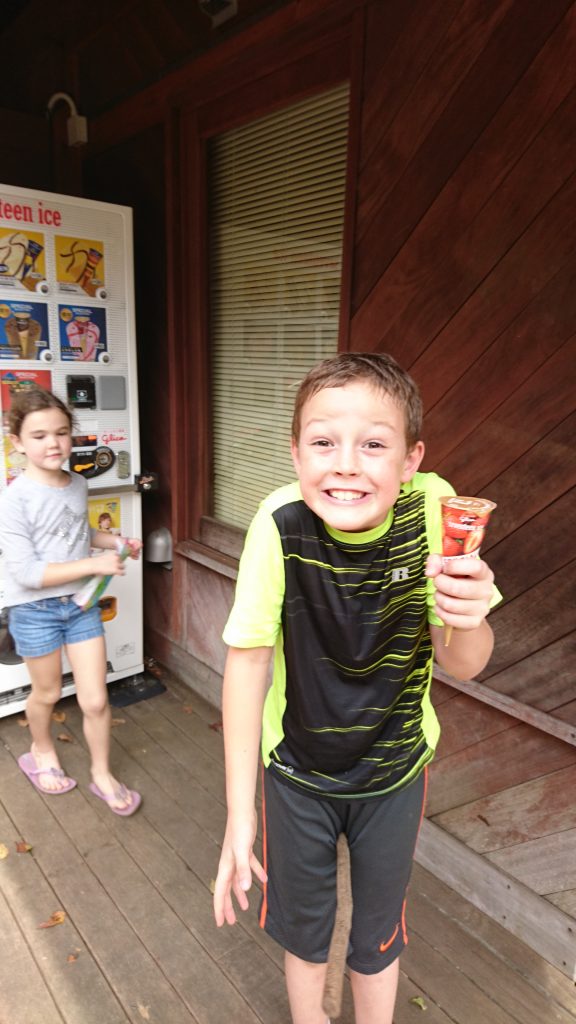 I said “Does she want to?” meaning, the horse. “She likes jumping.” Ok, then. Settled! Jump we did! It went fine. Thankfully, this horse that doesn’t like to turn left did enjoy jumping, and I even got her to kakeashi to the left, and take the jumps. Minor victory. This week I was offered another horse to try, the son’s horse, a gelding. I asked about hidari and migi and got the thumbs up for both, but then noticed a frown growing over the questioning-friendly-grimace-face about water in the arena. I asked if the horse got wild…difficult to translate. So I pantomimed the horse jumping, while holding the reins and got a questioning look, from the horse, too. So I mounted, and trotted over and through the standing water. No big deal. I guess it wasn’t too bad. I’m glad I didn’t know at the time this was the son’s “jumping horse” or I might have thought better of going through what it might consider big water hazards!

No dithering. Not at the barn. Just ride. Right, Analissa??? I think you said that once 🙂

A few more pictures, and a link to where I left off last week, I think… 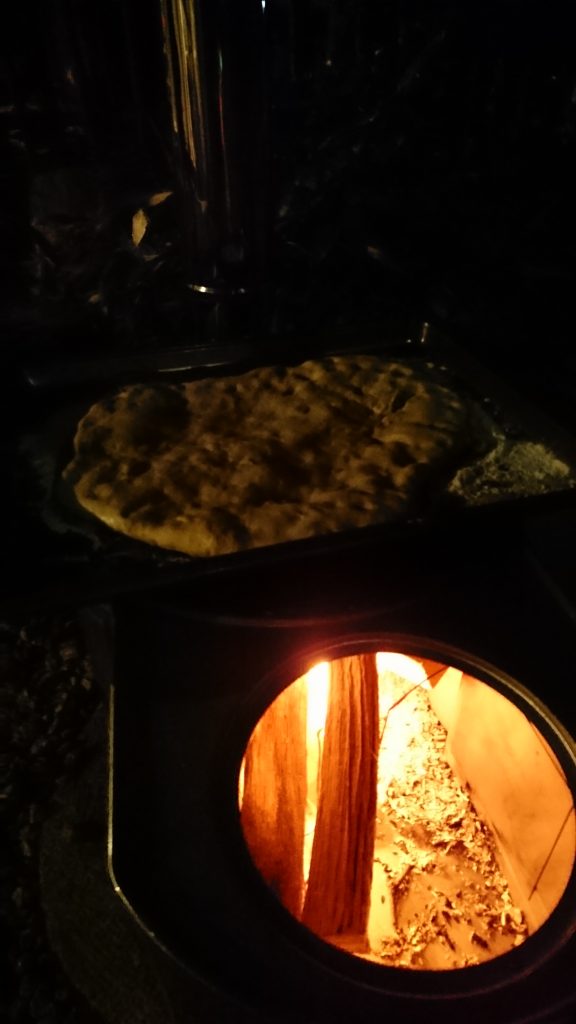 My new rice cooker being used to bake flatbread. So much fun to have a fire put to good use! I really lamented not having a fire here and it seems that is possible. Not only that…we can cook on it! I love this $50 furnace which a top that holds a rice pot. 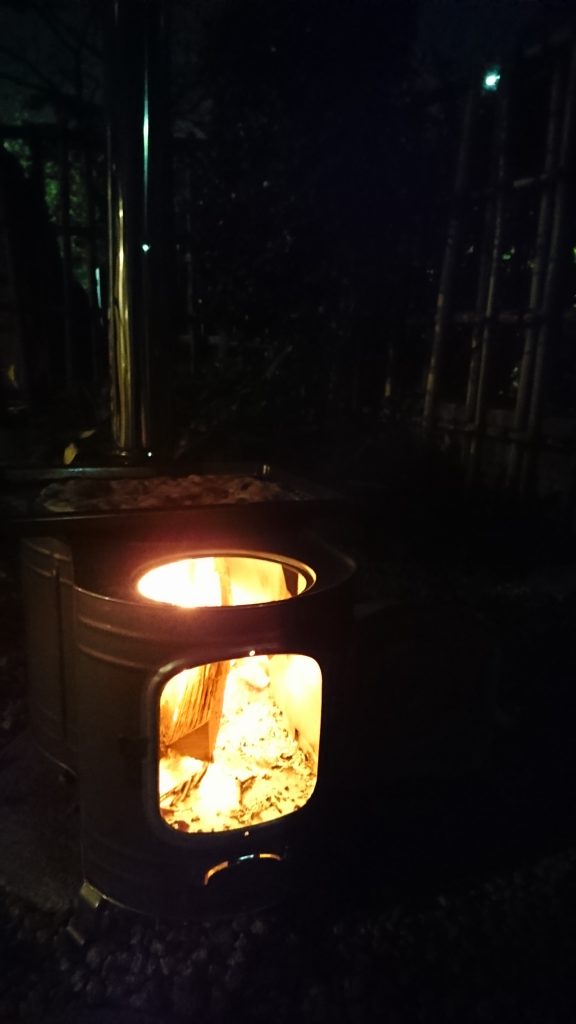 A better view of the front. A door opens up, and there are two access places on top for cooking. Pretty neat! I first saw a cast iron one at the barn. Figured I’d start reasonably, and then get a heftier one if I find I can use it. Well…that question was settled immediately upon returning home! 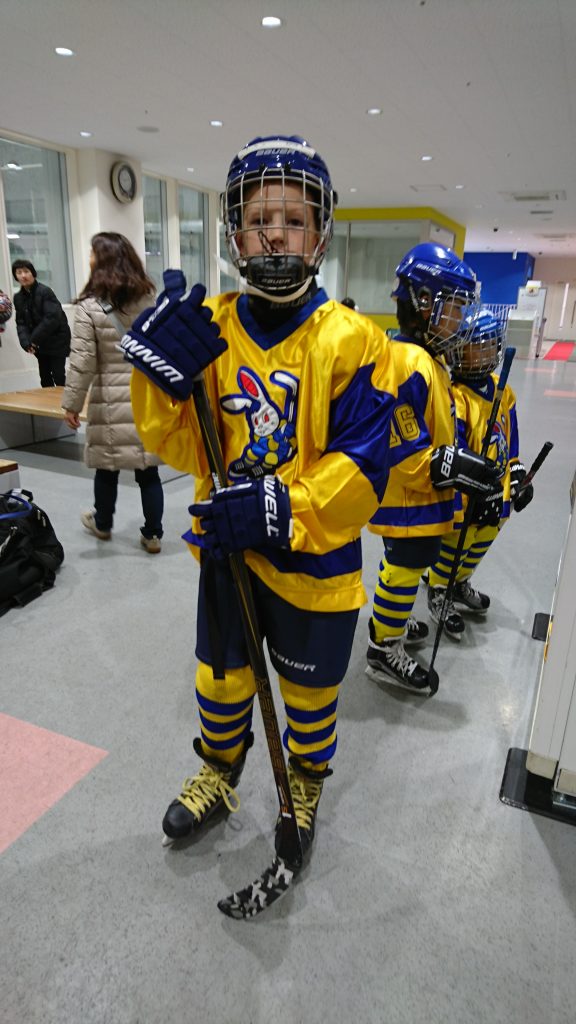 Ben ready for his first tournament! Both boys held their own and did a good job contributing to their teams. Sam had a beauty of a slapshot from the point which found the net!