Rarely does one word define an entire week, but here that seems to happen with some regularity. Maybe it is because I’m investing quite a bit of energy into herding words into sentences.  Maybe I learn a new word, and my life  ends up orbiting around that newly-discovered planet. A few weeks ago it was hetakuso, meaning “unskilled.” My kendo sensei says I’m unskilled. I think he’s mostly teasing, but he’s also correct.

Being willing to accept the notion one is hetakuso at something, or many things, can be very liberating. Growth is possible, expectations are not high, and continued work is rewarding. Others appreciate humility, too. I was recently elected to a school advisory council. There were only three candidates for three positions. Still, I was a little disappointed that I had slightly fewer votes than the other two. Since, I have thought about my candidate bio, and what people know about me, several times. Maybe my slightly shorter, tighter bio was off-putting? It was meant to convey professionalism, but possibly, in this context, it came off with a touch of hubris. More hetakuso-infused humility needed?

In Japan, it is relatively easy to organize volunteers. The humility of spirit here means no one feels that they are above a task, and no work is too menial to attend to with diligence. On our hockey team, for instance, at the beginning of the year the parents gather in a circle (standing) to discuss needed roles on the team. The team manager asks with a slight bow if a specific person will take the role. That person bows in response and indicates that he or she will. It is all done quietly and with humility. Each position (team support, public relations, tournament planning, etc.) usually has a partnership arrangement – one parent from an older student about to move to the next category, and a parent of a younger child in an apprentice role. The transitions seem relatively smooth that way. At kendo, each practice begins and ends with a focused message from the top sensei. It’s about adjusting mindset, and the Japanese build in opportunities to do that every day with opening and closing gestures. They also often convey attention to a conversation by frequent nodding or verbal acknowledgement. These small but meaningful parenthetical gestures seem to help train the mind to focus on the here and now. I’m thinking about way to infuse some of this cultural mindset of humility, mindfulness, sense of community and shared mission here at school organizations because we are really struggling to engage parents and encircle the school with more helping hands. 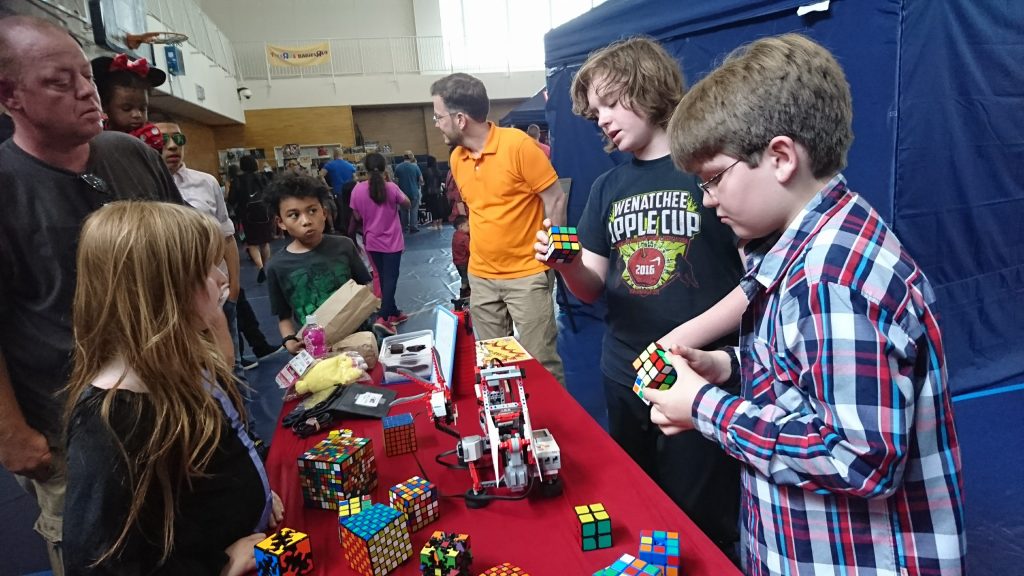 Sam and his buddy presented a Race the Robot Rubik’s Cube solving demonstration twice this month, once at school and once for a base-wide event. They hoped to inspire kids to pick up a new skill this summer – no batteries or charge wire required! The guys did an excellent job. This photo links to an album of the school event. 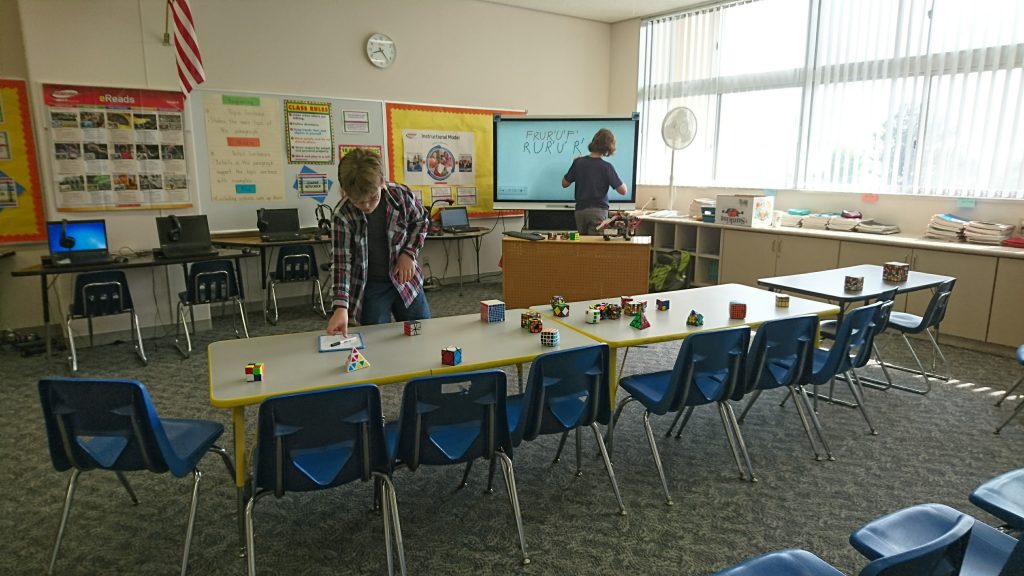 Setting up the classroom for the school event. They had 4 sessions, so about 100 kids total!

I felt particularly “hetakuso” two weeks ago at kendo. During a practice fight (shiai), sensei did a crazy whirling vortex move which launched my shinai (shinai rhymes with samurai, and is bamboo sword) out of my hands and clear to the ceiling of the gym. Everyone was fighting so no one really noticed – they were very busy with their own partners – but I stood there just amazed that I was a warrior without a weapon. It had happened so fast, and then it went so high in the air that it took forever to come back down – across the gym. Rather humiliating. I scampered to get it and resolved to hold on tighter. It’s tricky because you’re supposed to relax arms and wrist, but have a tight grip. As I said, I’m not coordinated. That level of refinement in muscle control is not my forte. He attempted to dislodge it again, but aha! He didn’t win that time. He tried again, but I kept my shinai in my grasp. Later in the practice shiai (fight), though, my guard was down and guess what? Yup. Shinai to the sky. 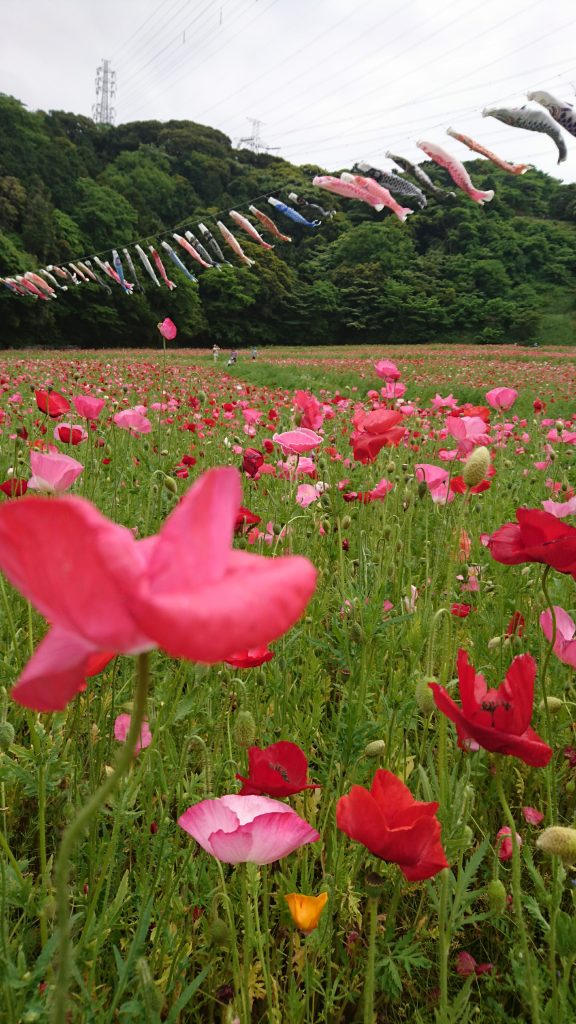 Mother’s Day was a lot of fun. Sam made pancakes topped with jam made by a Japanese friend. Then we went on a memorable walk in a city park filled with flowers…and Godzilla?! The koi flags above are flown in May for boys’ day. Photo linked to album.

However, the next day I was reflecting on my lack of skill and how funny it was to be looking all over for my shinai. In a battle that would be pretty much a dead end. But if I don’t keep my sense of humor about things, and take myself too seriously, I won’t keep pursuing these activities. Although I do get frustrated, I try to focus on the privilege of learning from these masters and developing friendships with the mothers and the children at the dojo. It’s not just the martial art we are learning, but also customs, culture and language. We’re very lucky they have taken us in. I am confident that our dedication and hard work make this relationship possible. Later, I entertained a chuckle or two at my own expense, thinking about how ridiculous it must have looked to lose my shinai twice.

The next week I was sick on Monday so I had to miss practice. I was very tired and still recuperating by Thursday, but wanted to go if I could. And go we did, because Ben and I really enjoy learning from the sensei. And because it helps us keep our Japanese growing, and because hilarious things always happen when you put yourself  in a situation that  is entirely unfamiliar.  Kendo is an intense endeavor, and we are just scratching the surface of what is a lifelong pursuit for some. By the end of practice, though, we were wiped. During another practice fight with another sensei, it was more like a comedic act. I kept trying to hit but failed and flailed miserably. I kept hitting the shoulders instead of the top of the head. Form was suffering, but I wouldn’t give up. At one point, my sparring partner happened to stub my toe with his foot (that really hurts – you fight barefoot so the feet take a beating.) It became truly funny, though, when we got our shinai stuck together! Mine went right through the bamboo slats of my opponent’s shinai! Unreal! How does that happen!? We stopped, laughed and untangled our weapons.

The next day I was riding and continuing to work on circles to the right. Ever since I hurt my right knee in November, it has been difficult to steer well to the right on horseback. I must sit asymmetrically after several weeks of favoring my right knee. The horse always falls out to the left. This isn’t such a big deal at walk or trot, other than being bad form, but at the canter you really don’t want to careen into a fence or tractor. So I’ve been intent on figuring out what I’m doing wrong. On Friday I resolved to do everything evenly, shoulders to toes, and just turn my head to turn the horse. This horse is very sensitive to these slight changes in weight, and it worked well. I began to feel like I was making progress. I started up a quick conversation about the challenge of
going to the right with my riding sensei’s son (whose horse this was) and said “watashi wa migi ga hontoni hetakuso!” or something like that. I’m really unskilled to the right! He looked at me quizzically, then said “Ole (the horse’s name) mo migi ga hetakuso.” Huh. Hoooonto??  (this is like “reeeeally?!”) Ole is also unskilled to the right? It’s not just me?

No wonder we get along well. 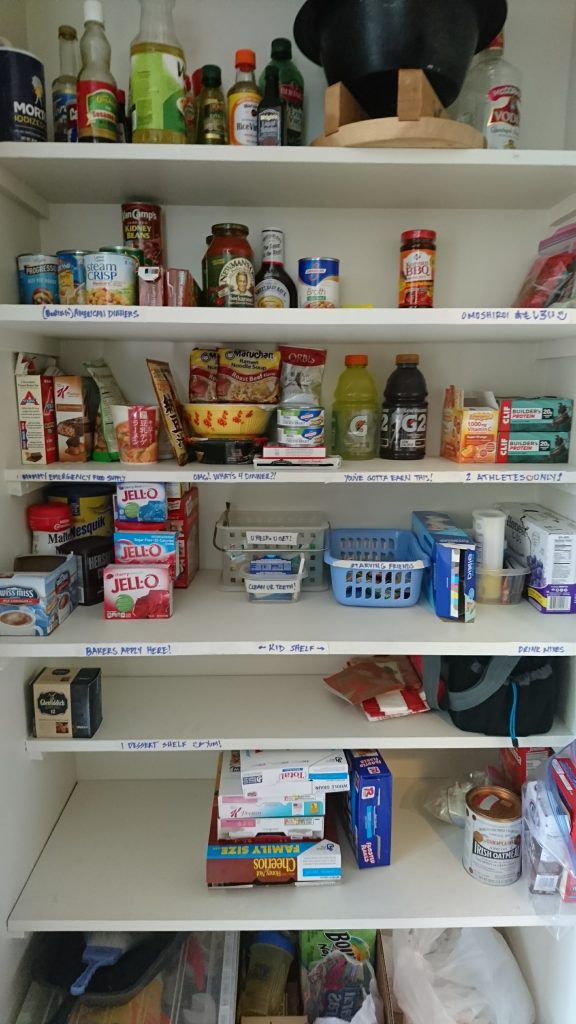 I reorganized my pantry. The labels reflect my state of mind most days 🙂 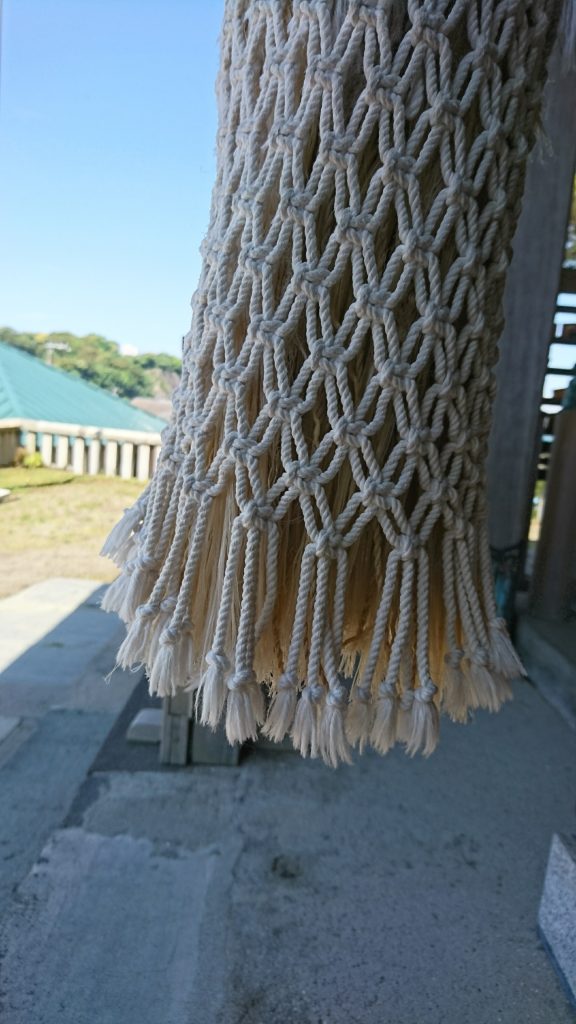 This photo is of a shrine I visited on a long run to Uraga. I enjoyed the shrine very much because it was dedicated to a Japanese-American man who lived in San Francisco but who traveled to Japan in the late 1800s to establish business relationships. He was so well regarded by the people, and came to this place to pray before sailing back to San Francisco.