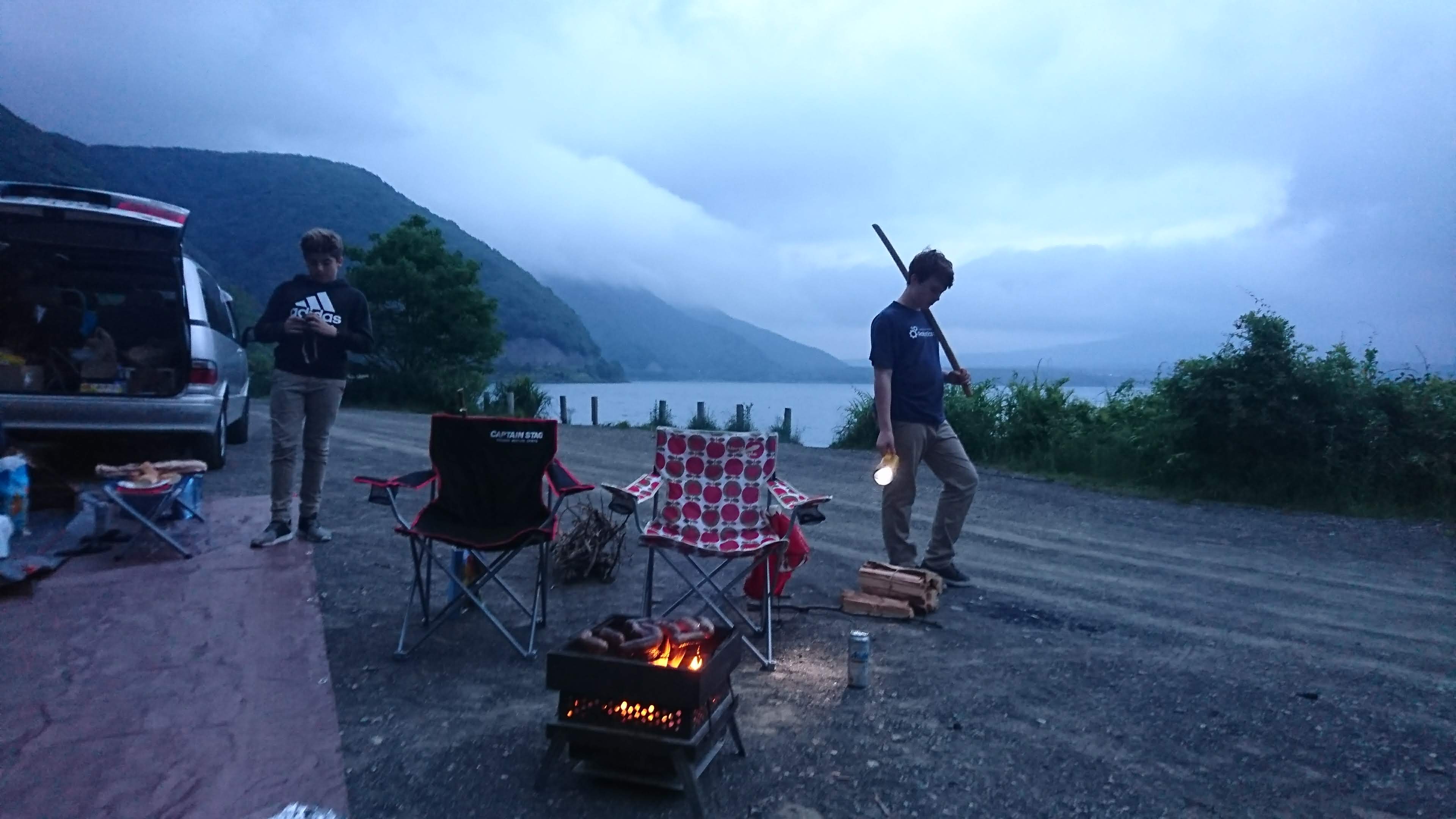 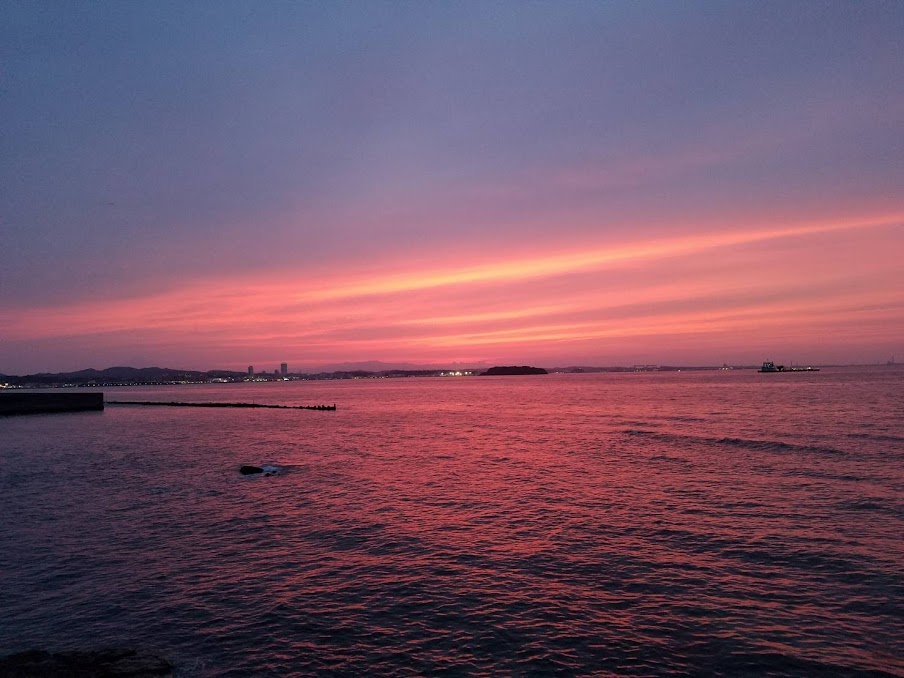 Driving home from kendo tonight, under the starry sky which has been obscured by June gloom, a collage (or collision?) of memories drifted by. It’s been so long since I have posted anything or even responded to “recreational” emails that my dearest friends are actually now sending brief pings “Alli? are you there?” And of course those who are most dear, I write to least often because I have so much to say, and I need white space in my mind and life to sort it out. This place is like a perpetual camping trip, though, in the best of ways. So many people around, opportunities to drop in, chat, play, and run amuck, so there’s really no private time or white space unless you’re deep in the night… 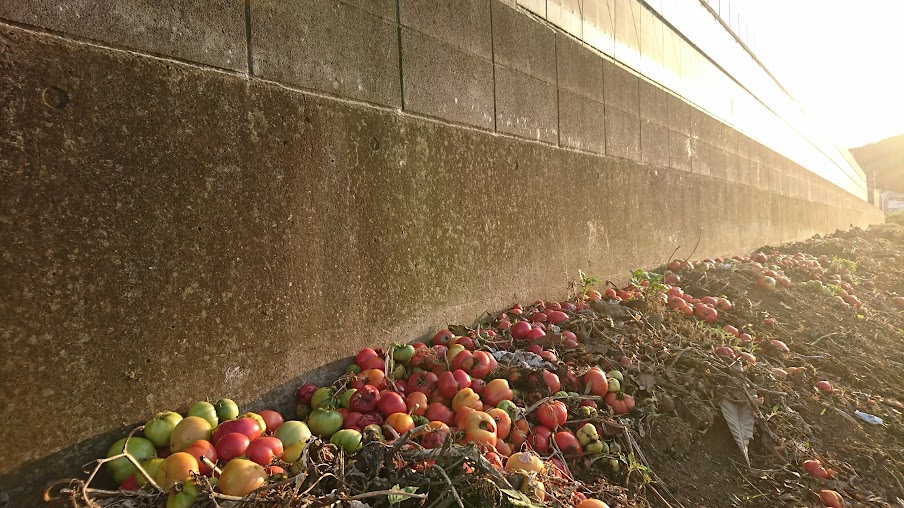 This is a farm near the hockey rink. These are tomatoes which didn’t make the cut. Japanese vegetable stands are perfection. Sumiko gurashi are cute little stuffed pet animals that Ben and his friends just love. They are the leftovers, forgotten in corners, the tapioca that fell off the spoon and got covered in dust, brought to life as the cutest round little pet toy accompanied by a tiny little dog-house. These tomatoes reminded me of sumiko gurashi – leftover, forgotten, yet they couldn’t be more perfect in the setting sun.

So dear friends and family, I am sorry. I hope this collage of memories allows us to reconnect with a laugh and a smile despite the passing of time.

As we drove home, Ben was manning the growing playlist on my phone, and with each song a new memory flitted by, because the playlist is the soundtrack of the past year. So many hockey tournaments, driving us into the frigid mountains early in the morning, along the rivers feeding rice patties and framed by bridges connecting modern cities. So many sunsets over the ocean, glimpsed through the chain-link fence encircling the elementary school where we practice. 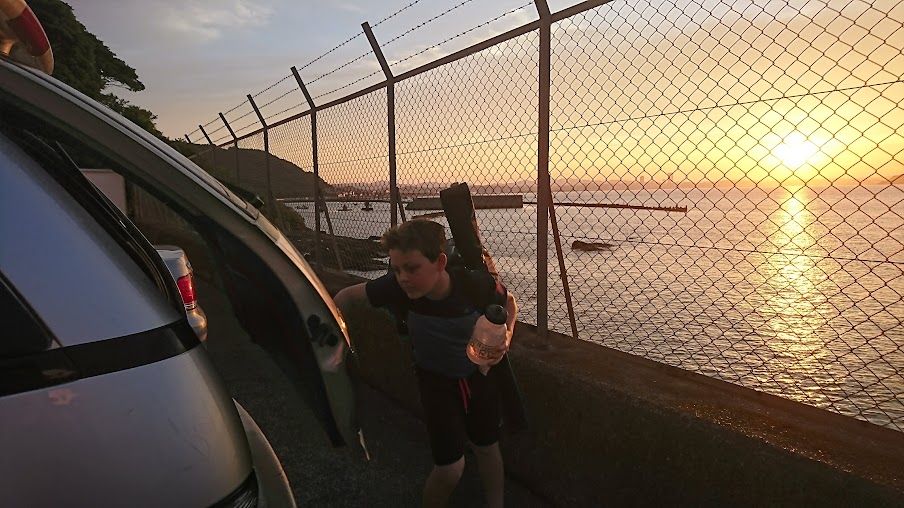 Lingering on the topic of kendo for a minute, tonight I thought (as I sometimes do) what the heck am I doing here? I’m in a dojo, I have practically zero coordination and I’m trying to learn this ancient art in a language I don’t know. And you know what? It’s extremely hard. Physically exhausting. What in the world am I thinking? I’m 47 now. This is a full contact endeavor, in heavy gear. In the Japanese summer. But eventually we always find our way to an appreciation of friendships, and funny reflections on the bench outside the konbini (convenience store) where we buy cold drinks and a little snack, and more milk for this family (we really need a personal cow). Tonight we were laughing about how one older sensei is always a bit off on the drills. We’re the foreigners, so it’s hard to figure out what we’re supposed to do, but we’ve got the hang now for many of the routines. However, this one sensei always throws us off because he’s doing something different. On the konbini bench, warm tea hydrating and calming me after the frenzied shiai (practice battle), Ben said, “I realize something now: there’s always an upside and a down side to everything. Maybe he’s had too many good strikes to the head and got a concussion.” 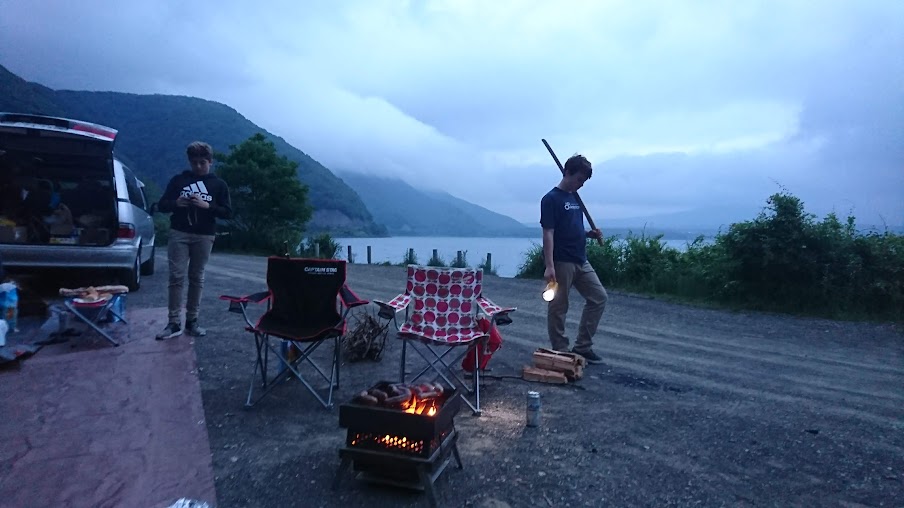 A moment from the camping trip. One of many, but one of my favorites.

We headed up, and as we pulled through the main gate we planned what question we wanted to ask the guard. This is something we enjoy doing, just to connect with these hard-working folks who spend endless hours in a tiny cube checking IDs. Usually we ask what their favorite song or artist is. Tonight the guard said “John Williams, he writes a bunch of great scores.” One night I’ll never forget. We had visiting friends (from Bainbridge Island!) with us, Dave didn’t want any questions. It was late. Not time for games. But we couldn’t resist. Hailey suggested “What’s your favorite cheese?” Ok! We asked. The guard paused, reflected for a second, and said “You know, funny you should ask. I’m actually somewhat of a cheese connoisseur.” (WHAT?!?!?! You know I’m just dying laughing at that point.) From there we gathered that he likes a particular kind of bleu cheese, from California. Best on the planet. Reyes bleu cheese. Try it, if you can find it. That’s what Hayes said that night two months ago. 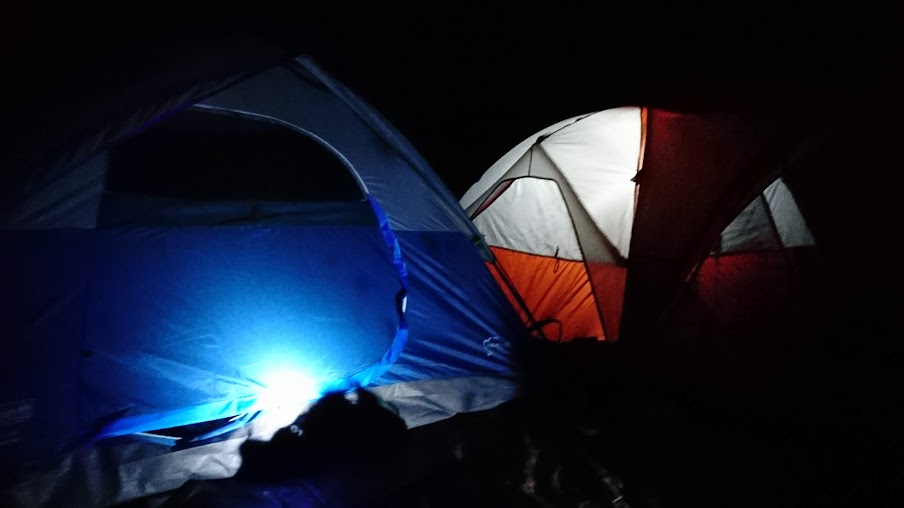 School got out on Thursday, and my friend and yoga sensei, Silvana (from Argentina), happened to be in front of the commissary when I scooted in to buy yet another rotisserie (pre-cooked) chicken to feed my family something that approximated a real dinner. I invited her to take her two boys  camping with us, and in a matter of 90 seconds we had a plan.  “Let’s just go” she said in her beautiful Spanish accent.  I love it. We’d sort the details out later, but we had an escape plan.  Our two families have boys similar ages, but they didn’t know each other. We also figured that would sort itself out. We crammed into my car, 6 of us, two tents, a fire pit, tons of snacks (because you can’t let teen boys go hungry if you hope to EVER kidnap them again for a camping trip!), sleeping bags, and eventually firewood, too. We had SUCH a great time checking out two different lakes near Mt. Fuji. First night in a tent (we were up all night expecting to hear the sound of bears or rain but it was literally the quietest night I’ve ever spent outside despite the earthquake we felt as we tried to drift off), second night in a fancy yurt (because one boy didn’t get that word in a spelling bee, and we’d never tried one, and so we decided we needed to give it a shot). We found friendly Japanese people at both lakes, apologized for crazy loud teenage boys by giving out a plethora of American snacks that Sam bought at the commissary (because he was being a pill, and I decided his punishment was to shop with me – boy did he turn that into a win – $240 in DingDongs, chips, marshmallows, PopTarts later and he was a happy boy, and so was I – time with my boys is the most precious punishment ever!)  Here’s the link: although be forewarned – I have not had time to edit out the crazy pictures yet. (Actually, the truth is I have gotten a bit overwhelmed with pictures such that I have lately moved to a one-shot policy. I give my self one shot to get the shot, no filters, no retakes. Whatever I got, that’s it. Apologies, but it’s the raw feed 🙂 ) 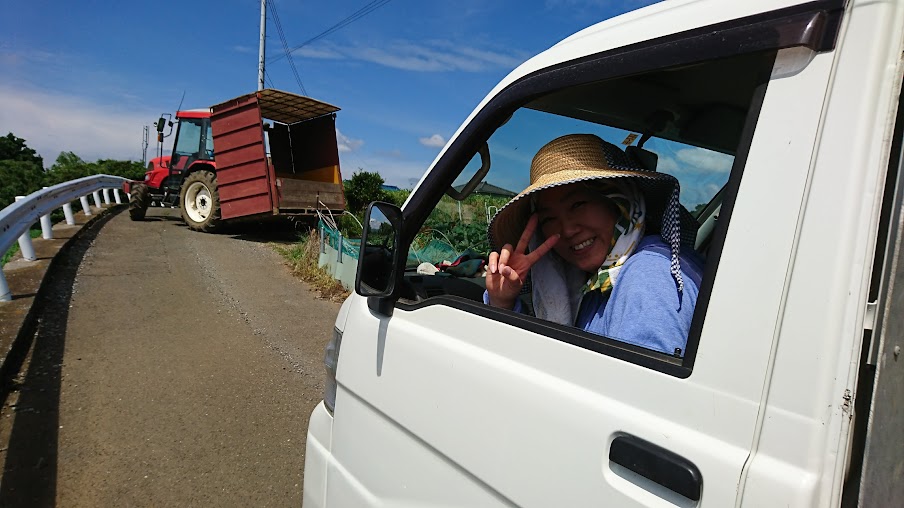 This is on the way to the barn where I help my dear friend Tomoe every Tuesday. The road is very narrow, but sometimes I’m rewarded with a view of Fuji as I down the last of my coffee. Tuesdays are always really hard because they follow two midnight returns from hockey Sat and Sun, then kendo on Monday. But as I caught this fun scene of machinery cramped onto the trail of a road, I heard “Ahhhleeee!” This sweet lady farmer knows my name!

Maybe the short wash cycle after kendo is the best time to reach out and share a few collage memories. The washer is spinning our hakamas dry, and I’m feeling a bit spun out, too, as June marches along and one friend after another moves away. But today marked the start of something new which reminds me of times past and the shoulders of giants upon whom I’ve stood (Judy Levine, I owe you a long note!). Today two teens I adore (Sam and Sammie!) launched an advanced math summer school for 7 middle schoolers, and we have another group of 7  elementary school students testing out an advanced math curriculum which we hope might be used next year. To my left, just past the kitchen counter, is a little one-room schoolhouse in our dining room. This morning we pulled out our long, Craigslist-purchased, IKEA table to the full 10-person length to accommodate all the kids. And we tightened the screws on the benches so no one would wreck while studying. 😉 Along the wall is a desk and some shelves I rescued from the garbage truck – my neighbor and dear friend is moving, and it’s her son’s old desk. Tired, older computers line the wall, and books and puzzle cubes populate the shelves. The kids studied then spilled out into the neighborhood to play, eat tacos, watch a movie and go bowling. Dave will not be entirely pleased that I’ve commandeered the dining room in this manner…but he’s away for several weeks, and maybe when he sees the happy faces and learning he won’t notice…??? Nah. You know better. 😉 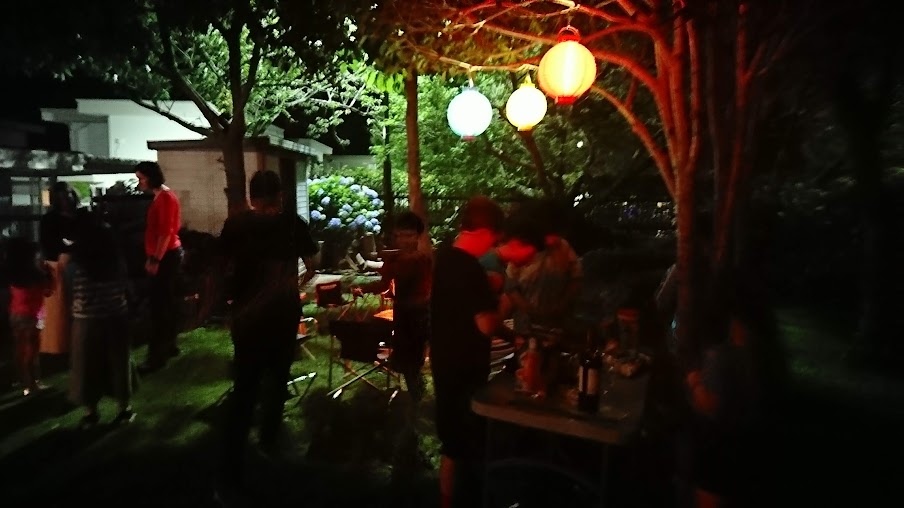 Paper lanterns, new (old) chairs, new and old friends, marshmallow sticks which can do 6 at once, Ben manning the music from his YouTube playlist on the other side of the dining room window screen, and a camping dinner of sausages.

A few nights ago we had a bonfire to welcome new neighbors and send off our friends across the road. Matchje is my fellow collaborator on school advocacy matters and is an inspiration every day. She was the first to welcome me with cookies, and finds a way to humbly serve so many people despite the many demands on her time. She’s the kind of wife and mother who always has a dinner plan, and not only that, a lunch plan for her teen boys, and a math pathway in mind for middle and high school, and by the way, considers it relaxing to measure linens so they can be properly labeled for sale in the thrift store. She is amazing. Truly. I’ll close with this. When they arrived at the bonfire, which was dressed up for the occasion with a few little paper lanterns, a folding table, and plenty of s’more stuff, Matchje had a spare folding chair for me. As we placed it around the fire I realized a tradition had been borne: neighbors bring me chairs when they move. I have 2 stools from Gerry, a dining table chair from Paul and our friends have paper lanterns from us.  Chairs, lanterns, desks and shelves. Thank you for your friendship here, and thank you for holding us dear enough to say – hey Alli, for goodness sake, where the heck are you? Know, dear friends and family, that I love you and have your letters and notes close to me and was waiting for a time when I could truly connect with you. I realize now that time rarely comes when you live in perpetual camping trip 🙂